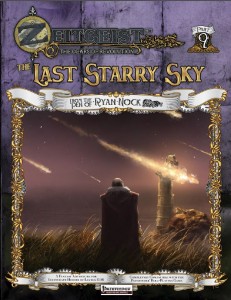 The ninth installment of the superb Zeitgeist AP clocks in at a whopping 105 pages, 1 page front cover, 1 page editorial, 1 page ToC, 1 page SRD and 1 page back cover, leaving us with 100 (!!) pages of content – that’s more than some self-proclaimed mega-adventures out there…

This being an adventure-review, the following contains SPOILERS. As such, players wishing to play this intelligent and exceedingly ambitious AP should jump to the conclusion.

We rejoin our loyal constables of the RHC in the realm of the Dreaming, the lands of the fey, where they were dumped after facing off against Nicodemus, the immortal head of the Ob’s conspiracy. Now if you have any degree of familiarity with roleplaying, you’ll probably know that the combination of “Stranded” and “Fey” in any combination in one sentence do not bode well and indeed, if the PCs were expecting whimsy, they’ll get that – of the lethal sort, for there is war brewing in the realms of the fey. Let me elaborate – two courts have been in a state of cold war for quite some time – until Rock Rackus, troublemaker and celebrity bard, entered the fray – remember this loud-mouth from the campaign’s beginning? Well, turned out that his claims have had some truth – he indeed slept with the Queen of the Fey…who also is the king, as the mirrored face of said lord projects the subconscious of any who look upon the entity. Worse, his inclination of “sticking it to the man” made him a pawn of the machinations of the second court as well and thus, a valid linchpin to destabilize the whole realm.

The fey/elder evil-combination the players know from adventure #3, the Voice of Rot, has had an agent abduct Rock and “murder” a false body instead, inciting hostilities between the courts – a conflict the PCs will have to resolve to return home. That is if they manage to maneuver through the politics and oddities of the fey courts – worse, returning home is not as simple as one would deem, nor is finding Rock, who has been safely sealed away in a pocket/prison dimension-ish place called the absurdist web. It should be noted that unearthing the truth may not *necessarily* be the interest of the PCs – allying with the mastermind behind the abduction may well be a smart move…for now. Then again, choosing the new sovereign of the fey and duking it out with a potential candidate or the majesty ought to be considerable fun. Still, the investigation here is just as modular, odd and challenging as you’d expect it to be. My only gripe here would be the lack of a proper planar-trait synopsis as established in PFRPG’s standard, though that admittedly is a gripe I can classify as a nitpick in view of the overall interesting plot here – including a rather phenomenal potential for a face-off against a fey-titan that is truly ridiculously huge…and deadly.

Time, alas, waits for no one, not even PCs stranded in the realms of the fey, and meanwhile, the world is succumbing to the vision of the Ob, with Risur a beacon of hope and resistance, thanks in no small parts to the PCs warning the king and thus ensuring the united spirit of his people (as established via the concept of Rites of Rulership) to remain intact – for now, for when the PCs arrive at a wedding he oversees, the OB’s plan kicks in and they use wayfarer lanterns to draw the vfery palace into the Bleak Gate. The PCs have exactly 5 minutes to thwart this transition before they and everyone is fully manifest in the Bleak Gate and faces essentially unbeatable odds. Oh, not that the constant barrage of elite assassination teams and Ob-forces defending the lanterns would make for an easy time – quite the contrary. The Ob have failsafe upon failsafe and defeating one team is by far not enough – essentially, this is a constant stream of highly lethal attacks on the king, with success being rather likely unless the PCs are up to the a-game. The Ob are smart – let’s hope the player’s minds have been sharpened as well by the constant tangling with their foes.

Whether the king lives or dies – there is more to be done, namely interrupting the ritual of Stanfield – only issue being having to attack the best-defended lighthouse in the world – simple, right? An epic naval battle ensues, one that comes, as always, with my firm advice to utilize the naval combat rules of Fire as She Bears instead. Other than that, the dramatics and set-up here are pretty much awesome – as would be the final assault on Stanfield’s fortress, where the mighty oracle fights the PCs with all his prior incarnations. But once he falls, so does the sky, evaporating his lighthouse and saving Risur…for now – but as the PCs scramble from the rubble, they realize that their magic is gone (a notion covered and explained alongside the rules of the New World Order in a sidebox that makes infinitely more sense than the ill-conceived 30-cap in #8) and there may or may not be one final battle to brave…in any way, as the night-sky changes, the nebulae of the heavens form the shape of titanic gears – the New World Order has dawned and the PCs may have witnessed indeed the last starry sky…

The pdf also deals with the rather likely death of the king and the notion of PCs becoming monarchs, appendices with stats for both creatures, NPCs, ships, etc., magic and training and handy maps that e.g. make the overlaps of the lanterns during the assassination apparent, etc. – as always, the quality of the full-color maps is superb, though I wished the layered pdf had a way to make them player-friendly (i.e. no legend/keys).

Editing and formatting are top-notch, I noticed no significant glitches. Layout adheres to Zeitgeist’s beautiful, layered two-column full-color standard and thus allows for significant customization. Artworks range from gorgeous to stock and are copious. The cartography is excellent, as always.

Ryan Nock’s #9 of the AP sees a return to form for me – while I am not yet sold on whether the new abilities imposed by the finale of the module will receive proper rules-translation in future installments, I can safely say that this installment of the series, apart from pretty much negligible details, can be considered one of the most creative. Much like in WotBS, this one could be deemed the oddball, feyish, planar interlude and as such would make perhaps one of the easiest modules to rip out of the context of the whole AP – the first Act, the assassination etc. could be relatively easily scavenged for other purposes beyond this AP. That being said, the main star of this module, let’s be honest, is the cinematographic dramaturgy exhibited by the scenes – the stakes are impossibly high at this point and one can see that from the get-go. The challenges also reflect this more than just on a cursory way and yes, when played right, this module can be a delight, but also exceedingly lethal. My final verdict will clock in at 5 stars + seal of approval, though I am somewhat skeptical about the new magic rules for the world and whether they will work properly in future installments. One more nitpick, perhaps – the rules, at least as hinted here, seem to not take #7 into account, which imho is a lost chance for the meta-plot to make the PC’s decisions matter – an oversight I hope to see rectified in the compilation of the second act.

You can get this great installment of the Zeitgeist AP here on OBS!

Prefer 4th edition? You can get that one here!