Faces of the Tarnished Souk – An NPC Collection

Faces of the Tarnished Souk – An NPC Collection 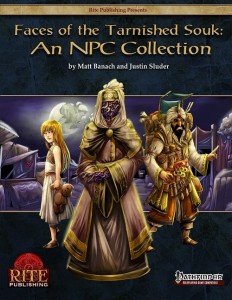 This review was moved ahead in my reviewing queue as a prioritized review at the request of my patreons.

Well, first of all, I will deviate from my usual take on detailed analysis of the individual pieces of content herein -why? Because that would take AGES and bloat this review beyond the page-count where this would have any semblance of help for anyone of my readers. Beyond that, there is another factor – I have written detailed reviews for each and every NPC (apart from the new one) sported in this massive compilation – combining them would result in more than 30 pages, so there you go. If you’re interested in one particular NPC, you can have a detailed analysis of said build in my individual review of the respective pdfs. If you have read them, here’s a general summation of what sets the NPCs apart.

Fluff-wise, the Tarnished Souk can be considered an interplanar nexus situated on the plane of dreams, right outside the legendary Coliseum Morpheuon, where the most powerful mortals and immortals duke it out under the auspice of the khan of nightmares, all hoping to gain the cusp of desires. Oh, and yes, the tarrasque is actually part of the competition’s challenges, to give you an inkling of the level of expertise required in this competition. Dreams are a vaulable currency in Coliseum Morpheuon and thus, they actually carry relevance beyond the story’s basic requirements for the characters in question. As such, they may actually be found by PCs and provide a level of background information one regularly does not expect. Dreams are more, though – they are power. While dreamburning rules from Coliseum Morpheuon are not required for this book, it does add a nice further dimension and honestly, Coliseum Morpheuon is the best high-level module available for Pathfinder, so you definitely should have that beast anyways.

So what is special about the NPCs herein? Well, regarding crunch they are special to me because they don’t suck. There. I said it. Pathfinder’s high-level gameplay and the general experience of many a DM that high-level gameplay comes apart, at least partially, is due to just about all published books simply having an impossible job at their hands: The directive is to create adversaries that a casual gaming group can vanquish and the more the levels pile up, the bigger the discrepancy becomes between people that exhibit a high degree of system mastery and those who don’t. At high levels, this ultimately leads to whining I’ve seen on boards about ACs of 36 in high level-ranges where that is not an insurmountable defense. At the same time, posts complain about 1-round curb-stomping BBeGs, a problem exacerbated by the mythic rules, famously being quoted by Alexander Augunas as the Rocket-launcher-standoff.

In my main campaign, I run next to no unmodified published modules – why? Because, if I took Karzoug against half my group, they’d mop the floor with him. Yes, I’m talking about the enhanced Anniversary Edition. Playtesting published modules only VERY rarely results in any PC deaths at my table, even in Frog God Games killer beasts. And I’m not alone in this issue. While my group may be an extreme example, it is a trend that is exacerbated with each new release, with each slight power-creep. In 3.X that resulted in me wearing down my Advanced Bestiary and templating EVERYTHING. In PFRPG, I follow a similar modus operandi, though one supplemented with many, many base classes, archetypes etc. So that would be problem No.1.

Problem number 2 is a more pleasant one to have – ultimately, there are MANY awesome 3pp-products out there -glorious base-classes, exceedingly fun subsystems etc. – and yes, I’m using more 3pp material than Paizo material at this point. Alack and alas, there is no big 3pp NPC Codex and that means making A LOT of NPCs and monsters from scratch. Faces of the Tarnished Souk did something rather unique – it provides a vast array of templates,. both original and from the best of sources and combines them with unique classes – taskshapers and time thieves, malefactors – whatever your heart desires, there is a good chance you’ll find some of the unmitigated stars within these pages. Add to that unique, custom-tailored magic items and you get an array of NPCs that is ACTUALLY CHALLENGING.

Now that would be awesome in and of itself, but it becomes even better when you take into account the vast imaginative potential that lies at the roots of the characters provided herein – you won’t find “Human Paladin 20” herein – instead, you’ll find, for example, Nameless Nil, the Beggar of Self. An imaginary friend turned killer turned beggar, whose wonderful class/template line reads “Bloody Maw Half-construct horrifically overpowered hungry nightmare unfettered eidolon savant 10.” This is, as the back cover proudly proclaims, NOT your pappy’s NPC book. Nameless Nil’s prose and background story ranks among the best pieces of character writing I have seen in ANY roleplaying product, btw. – this guy is my favorite NPC for Pathfinder. Yes, I’m talking about all-out number 1 spot. Oh, and have I mentioned that, for example the legendary bulwark Ahnkar-Kosh has an AC of 64? This should put an end to the smirk on your level 20 min-maxers face…

But wait, before you put away this review – no, not all NPCs in this book exist only in the CR ~20-range – instead, each of the NPCs herein comes with a build for low levels, mid levels and high levels, allowing you to introduce the NPCs at any level you like and depict their progression to greatness- or utilize the statblocks of the lower iterations for servants, creatures or whatever you like. Another issue you may expect to face would lie in the aforementioned presence of a lot of 3pp-content utilized in the truly beautiful builds created herein. Well, approximately the last 100 pages of the book are used to provide all rules used in the builds of this massive cadre of glorious CHARACTERS. For, thanks to the interplay of glorious prose and superb crunch, the NPCs become more than the sum of their respective parts.

If you are not inspired by the glorious write-ups of the respective NPCs, many of which can spawn multiple adventures (or even campaigns!), boxes with pieces of advice further help using the NPCs and integrating them into the mythos of your campaign. Have I btw. mentioned Smiles-Under-teh-Bed, the legendary Cheshire cat that is pretty much a psychotic, playful killer that clocks in at CR 19 in its most powerful iteration? The eidolon that is the summoner that wants to be mortal? The goblin time thief convinced that things between the seconds are gearing up to tear time and reality asunder? If you have ANY joy contemplating high-stakes games, personal tragedies, captivating NPCs and a level of imagination I have not seen since the heyday of Planescape, and there only in its better products, then this compilation should be considered a ridiculously glorious must-buy.

How can this be further enhanced? well, the original pdfs sported some artwork which has since been used by other supplements as well – this has been expanded by new pieces that seamlessly fit with the respective character portrayals, with Juan Diego Dianderas and Kamil Jadczak delivering great pieces in the fitting b/w-standard this book offers and adding to the talents of illustrators that not only include master of the creepy Mark Hyzer, but also Tamás Baranya and Hugo Solis and many, many more. How can this be made better on a content-level, you ask? Well, what about adding a brand new NPC by none other than legendary, Ennie-award-winning design Ben McFarland? This would be Strai Tkossirk, the whispered word of dream. This would be, in his highest CR-iteration, a psychic (telekinetic) vrock oracle (aetherurgist) – and the level of imaginative potential of this NPC in no way falls back behind the ridiculously high standard of the series, utilizing for example a magical drug-addiction in the mid-level version. And yes, as per the tradition with this series, vivid prose, GM-advice and tactics combine to create a creature that is more than the sum of its myriad parts. On a nitpicky side – I think it would have made more sense to include him in the NPC-roster instead of in the appendix, but that is ultimately one design in a huge book….and remains the only true gripe I can muster against this tome.

Editing and formatting are very good, especially for a massive tome of this size. Layout adheres to a printer-friendly two-column b/w-standard with elegant borders and the artworks provided, as mentioned above, are thematically fitting and, in many cases, awesome. The book comes fully bookmarked for your convenience.

I have all individual pdfs printed out. I want this book in dead-tree. This is not “an” NPC collection – to me, this is THE NPC collection. Faces of the Tarnished Souk epitomizes what made me a fan of Rite Publishing in the first place: The combination of awesome prose and imaginative fluff that goes one step further. I guarantee that the vast majority of characters herein, once encountered, will remain the talk of your gaming groups for years to come. Beyond the cool mechanics, this series has pretty much defined what I consider apex-level NPC-crafting and remains my point of reference for any such book. It should be noted that exactly ONE pdf can claim to adhere to this level of awesomeness beyond the series – LPJr Design’s Cyrix. That’s pretty much it.

When anyone asks me for challenging or simply evocative NPC builds, this book immediately comes to mind. When someone asks me for the spirit of truly uncommon fantasy, this book is what I think about. Whether as antagonists, allies or both, the characters herein pretty much define my campaigns in subtle ways – by the legends they have crafted, by the guidance they provide, by the growth my PCs can witness. Matt Banach, Justin Sluder, Steven D. Russell and Ben McFarland have quite simply created THE NPC collection for the discerning game-master, the remedy for players bored with standard builds and, via the builds herein, a great toolkit for GMs to use themselves.

Even if you never plan to run any of the characters herein and are not interested in Coliseum Morpheuon, this book provides so many iconic characters that it remains my honest belief that this book can serve as an inspiration for other settings as well. If my gushing diatribe before was not ample clue, I consider this quite frankly the best NPC collection out there, one distinguished by excellence in the beautiful statblocks AND the prose that draws vivid pictures of truly unique characters that deserve the moniker while epitomizing the key strengths of Rite Publishing as a publisher. This book, unsurprisingly, receives a final verdict of 5 stars + seal of approval as well as being a candidate for my Top Ten of 2015.

You can get this legendary compilation here on OBS and here on d20pfsrd.com’s shop!