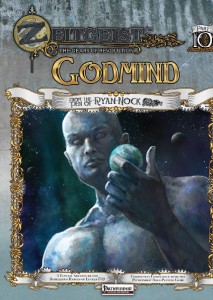 The 10th installment of the Zeitgeist AP clocks in at 87 pages, 1 page front cover, 1 page editorial, 1 page ToC, 1 page SRD, 1 page back cover, 1 blank page, leaving us with 81 pages of content, so let’s take a look!

Now before I go into spoiler-territory, you have to know one thing: The Zeitgeist-team got it right this time around – my fears regarding the new rules of reality as presented in the review of #9 proved to be pretty much unjustified, with an appendix covering them in an easy-to-grasp and concise manner. Oh, and if until this point you’ve been annoyed by Zeitgeist’s campaign setting adhering to rules regarding magic that deviated from the base PFRPG-assumptions, then you’ll probably like quite a few of the changes, since e.g. flight is “unlocked” by the change in cosmology, among other things. Now yes, there are still some special rules here and modifications of a certain PrC, but overall, the changed rules provide a unique backdrop that changes radically the way in which the world works – to a point where one can definitely say “VERY” high fantasy -and at this level, that’s a good thing.

All right, but you’re here for the review, right? All right, as always, from here on out reign the SPOILERS. Potential players of this saga should jump to the conclusion to avoid them.

All right, still here? Okay, so the New World Order of the Ob has come to pass, at least regarding the rules imposed on reality itself – as the PCs come to grips with these new rules, the tarrasque-excrement hits the elder air elemental’s whirlwind. Remember those fun, kaiju-sized colossal fey titan-thingies? Like the Voice of Rot that could be forced to an at best uneasy escape/truce? Well, the other 4 have awoken and wreck havoc across the lands – the Ash Wolf, the Father of Thunder,Granny Allswell and She-who-writhes all have arisen and need to be bested, defeated, tricked – whatever…that is, if the spontaneous generation of hiveminds that are exceedingly lethal don’t put a premature stop to the PC’s careers as, potentially, the people in charge of the nation. And yes, each titan receives a stunning artwork. It should be noted that the latter of these creatures is provided as a naval engagement – if you dislike Zeitgeist’s subpar naval combat rules, let me kindly recommend Rite Publishing’s Kaiju Codex to provide some fitting and exceedingly deadly substitutes. You’re welcome.

While the PCs were busy stopping these titanic threats with wits and blade and fleets, Pemberton has taken Axis Island from the Ob and presents an interesting wildcard-option – an alliance, with the PCs essentially now heading the conspiracy against the Ob’s New World Order – provided they do not fall victim to more hiveminds and similar threats. After further conversations with Nicodemus etc., the PCs will have to face the fact that they’re standing pretty much alone against the world – with Pemberton offering an airship as a way out, as the Ob’s forces prepare to crush Pemberton’s forces on Axis, while the OB is starting the Forward Symposium, wherein the world’s leaders are supposed to chart a course for the unified world government. Thankfully, the PCs and their allies have a man inside by now – unfortunately, not even for Nicodemus everything goes right – his symposium, enhanced by the rationality-enhancing nature of the new reality, is doomed to failure. The unfortunate hivemind phenomenon, brought, according to Nicodemus, about by the PC’s meddling (like the vanishing of stars and sun…) as well as the presence of the gidim race, takes a hold of the symposium – where every delegate is a hivemind of his ideology, their collective becomes a brutal, nasty super-hivemind, the eponymous godmind, an entity that can be defeated by reasoning with the people subjugated among its vast power – or killing them. Either way, the symposium has failed, for now, with Nicodemus tucking his tail between his legs – a result, which leaves the world significantly less unified than the master of the Ob planned.

Alas, unbeknown to the PCs, the grinding gears n the heavens actually have a draw on the world, pulling it slowly closer – and it turns out, this phenomenon is essentially a way for the multiverse to destroy useless planes and planets – the gyre is grinding, but chances are, your PCs won’t know that, so let them revel in their triumph for now…the stakes are getting higher.

As always, the appendices cover the creatures and NPCs as well as supplemental rules like aforementioned new ways in which reality itself works.

Editing and formatting are top-notch. Layout adheres to Zeitgeist’s beautiful 2-column full-color standard and the pdf comes fully bookmarked for your convenience. Artworks range from drop-dead-gorgeous original pieces to solid stock and the pdf is layered, allowing you customization for ink/toner-use and modification of the full-color maps provided – I just don’t understand why one cannot get rid of the legend/key on the maps to render them more player-friendly.

Ryan Nock delivers a rather fast-paced action-romp, at least as far as Zeitgeist goes – don’t get me wrong, that is exactly what is required here. The new rules of the world breathe a change of pace and offer tactical options the PCs need to become familiar with.

That and the guise in which all of this happens is thoroughly compelling – taking on these legendary creatures is immensely satisfying, as is the finale, in which the PCs may finally execute a strike that really hurts their enemies. After the massive amounts of investigations and scheming, this pdf provides a great introduction to the 3rd act and can be considered the equivalent of the massive, initial fight-scene one can see in action movies in the beginning – at least more often than not. This is an unapologetic high-fantasy love-letter to dealing with the truly fantastical and works well in this context. Were I to voice any gripe in this regard, it would be that one titan should have non-naval stats and that imho, the final social encounter could have definitely used more diverse tactics and lines of reasoning for the gathered individuals – but that may just be me being spoiled. All in all, this is an epic continuation of the saga and well worth a final verdict of 5 stars plus seal of approval.

Prefer the 4th edition version? You can get that one here on OBS!