Mini-Dungeon: I Am Not Of Your Element

Mini-Dungeon: I Am Not Of Your Element 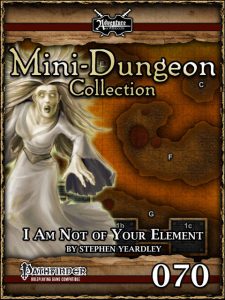 When a faultline had a wave of unearthly energy flow into the underworld, it decimated a fire giant monastery down to just a doombringer. Now, a travelling and injured shadowdancer awaits, as a massive swarm of gray goo seeks to change folks; it has animated a brass golem and a fire giant banshee-variant (stat-modifications provided) can be found. The place is one of wrecked glory, as a ghorazagh plans the final take-over of the place…and indeed, smart players may well contemplate at least a temporary alliance with the fire giant doombringer…

Stephen Yeardley’s take on a subterranean monastery haunted by a recent catastrophe is interesting, mainly due to the clever enemies employed. While I would have loved to see the terrain matter a bit more, this is a fun sidetrek. (Come on, nanite-infused lava!) My final verdict will hence clock in at 4 stars.