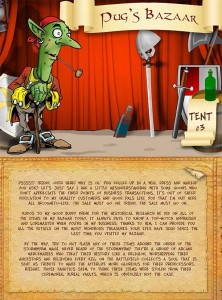 Our favorite goblin merchant of items both wondrous and weird is back, this time at 14 pages, with the cover doubling as introduction, 1 page editorial/ToC, 1 page SRD, 1 page advertisement, leaving us with 10 pages of content, so let’s take a look!

Each of the items herein comes with a well-written piece of introductory prose as well as an adventure hook, both helping to root the items in the lore of the game. The first items would pair a pair of deadly cesti/warhammer, both providing very powerful synergy-effects for magi, including a new enhancement that adds a stagger/daze/stun-effect to spellstrike-criticals, with severity scaling up according to the critical modifiers. Speaking of powerful items – what about a plate that increases the range threatened by 10 ft.? Yeah, OUCH! 50+K value may be much, but the benefits definitely outweigh that…thankfully, this only extends to movement-provoked AoOs…interesting. The plate also allows you to use up your movement as part of these AoOs (so you don’t have to swat at thin air), utilizing movement rate of the next round as a resource – pretty smart.

A fire-themed variant of shocking grasp with a splash-dazzle added in makes for an interesting variant spell. At 2nd level, an improved entangle that causes damage and potentially bleed could be slightly clearer regarding whether the bleed damage is in addition, though one can argue that’s the intent. Worms of light that cause Con-drain bleed at high levels provide one spooky imagery, and yes, they can effect undead, with modified wording. A canned trapsmith is a small, cute mechanical construct that can spot and disable traps autonomously. A pair of goggles that can not only perceive certain auras, but also make the visible to those not wearing them, may be interesting for some people.

A spell that increases damage-output versus creatures suffering from perception-impeding spells and effects is an interesting one in that it combines spellcasting, conditions and attacks/sneak attacks. Now where the pdf becomes glorious would be with the bandoleer of distractions, which consists a significant array of unique – from prone-knocking balls of fur to animal-frightening whistles, this item is made of awesome and win!

If you’re like me and enjoy rock throwing monsters, what amounts to an enchanted orb that can cause earthquakes and the like as well as acting as a nasty piece of ammunition will be right up your alley. *cough* Giant Slayer Ap */cough* And yes, weight = 216 lbs. – player will have fun trying to haul this piece of loot around…

The final item herein would be the cremated ashes of a loremaster, which help identifying command words and items and by rubbing them on one’s eyes, one can apply the wisdom of the ancients temporarily to one’s own Perception.

Editing and formatting on a fromal level are top-notch, with the notable exception of italicization often being not implemented perfectly. Layout adheres to a beautiful 2-column full-color standard and the pdf provides copious full-color representations of the items in question – nice to see! The pdf comes fully bookmarked for your convenience.

Wendall Roy knows his craftsmanship -while the pricing of a bunch of items herein feel a bit too liberal and low for my conservative tastes in that regard, the items themselves and their prose/hooks deliver – why? because not one is just a lame variant of accumulation of benefits. Instead, they come with unique, mechanically-relevant bonuses and often, complex rules-language that properly makes these qualities work. Indeed, this is one of the best little magic item books I’ve seen in a while – though, balance-wise, I’d still consider omitting my seal of approval, especially due to the added italicization oversights. But on the other hand, this pdf’s items are, in part, gleefully bonkers and some are downright stupefying – they’re FUN. They actually feel magical, unique, more than the sum of some bland bonuses – and for that, in spite of the minor flaws, I’ll gladly rate this 5 stars + seal of approval.

You can get this cool, inexpensive collection of items and spells here on OBS and here on d20pfsrd.com’s shop!
Endzeitgeist out.