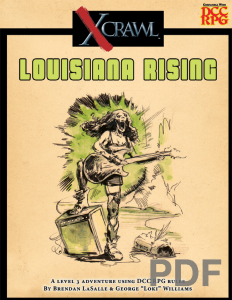 This Xcrawl-module clocks in at 20 pages, 1 page front cover, 1 page editorial, 1 page SRD, 1 page back cover, leaving us with 16 pages of content. It should be noted that both editorial and SRD are actually not the respective penultimate pages – relevant if you’re like me and tend to print out modules.

All right, before we dive into the nit and grit of this module for 3rd level characters, it should be noted that 100% of the sales go towards helping the flooded areas of Louisiana. While the shocking images of Katrina still are vivid in our memory, you may not necessarily know that the nameless, less catchy and media-marketable storms dropped thrice this amount…so yeah, it’s a module for a good cause.

One more thing, since I wager not all of my readers will be familiar with Xcrawl. First of all, you may know that I like playing DCC; while I don’t receive a lot of copies for review purposes for the system, I enjoy it immensely. Xcrawl would be a radically different type of setting/premise published by Goodman Games in cooperation with Pandahead Productions…and is one I really like – basically, the PCs are thrillseekers and super-athletes that participate in a Running man-style, hyper-lethal live-on-pay-per-view game show. The GM (here called DJ – dungeon judge) may actually use the moderator and the unique set-up for hilarious effect. The delightfully different set-up of dungeon-crawling as a very lethal competitive sport lets you generate a completely different atmosphere. That being said, you do not need the Xcrawl rule-book to play this module; DCC rules suffice.

There are some peculiarities the module explains, the first of which would be Mojo Pool. Mojo represents the unconscious power of teamwork and may never sink below 0 or rise (usually) above 12. These points are added on a 1: 1-basis to action dice for combat or spellcasting, skill checks or ability score checks. They *usually* cannot be added to saves, critical or fumble checks or corruption/deity disapproval checks and a PC needs to be at least 1st level; 0-level noobs don’t get mojo. Sounds common, right? Well, here’s the catch – you can’t spend them for yourself. You can only give mojo points to allied creatures or fellow PCs…and you may NOT ask for them – if you do, you are blocked from receiving mojo for the remainder of the scenario. This, as a whole, enhances teamwork and makes the group come together better in the long run, as fellow players learn to trust one another and the capabilities of the PCs.

Mojo is rolled at the beginning of an Xcrawl event by rolling 1d12; each player makes a luck roll as well – on a success, you add +1 mojo, on a failure, you deduce 1 mojo. Halflings double the bonus on successful checks. 12 is still the cap for the pool. If a mojo point is added to a roll and the roll’s a crit, the mojo points are added, but not actually expended from the pool – this is referred to as Destiny. Conversely, on a mojo-enhanced roll that results in a fumble, the group loses one additional mojo point – this is known as Choke, analogue to the disaster every Battle Rapper dreads.

Xcrawl, as an entertaining sport, also has rules for grandstanding – working the crowd, if you will. A grandstanding check is 1d20 + Cha bonus + character level, with crowds determining the DC and a default being DC 21. A character may grandstand up to twice per combat encounter as a move action; on a success, the character can gain 1 fame. Additionally, in the round immediately after a combat, the character may similarly grandstand, for the same benefit. That being said, feel free to insert my old and tired “per encounter is no reliable time-frame”-rant – not the biggest fan there.

But what does the fame-score denote? It is, basically, the percentile chance the character has to be recognized in a crowd. The higher the fame score, the more the character can ask for standard appearance fees in media, events, etc. – this money is out of crawl money and can thus not be used to cheese the artificially-created monetary balance of Xcrawls. A table of standard appearance fees and fame buy table is included…and if you don’t want to, you can pretty much ignore the whole section. Ahem, so that would be the rule-peculiarities!

Flavor-wise, it should be noted that several items are banned in Xcrawls; Safe rooms are called break rooms. Charmed adversaries are treated as defeated and yes, you may be disqualified if you, for example go through a NoGo door or attack a being with a NonCom (non-combatant) badge.

Anyways, ladies and gentlemen, please strap yourselves in and get ready! These basics out of the way, you want to know about the show, right? You want to see the struggle the athletes are about to face! Well, as always, from here on out reign the SPOILERS. Potential players should jump to the conclusion or risk a fate worse than that featured in our show!

The crowd DC for this module is a cuddly DC 13 and unless otherwise noted, hallways are 12′, doors requiring a DC 16 Strength check to break. It should also be noted that the PCs, if they mirror the out-game charity with in-game charity, will be rewarded. During the module, the PCs will have the chance to take charity shots of chartreuse – after the first drink, Fortitude saves are in order and a total of 4 stages of drunkenness, including rules-relevant effects. If you and your buddies are responsible adults, the module can double as a neat drinking game…ahem. Not that I’d endorse that or anything. *insert usual rapid-fire speech disclaimer about responsibility etc.* But I digress.

We begin with an extensive array of read-aloud text that sets the unique stage perfectly, even for groups unfamiliar with Xcrawl, including an introduction of the DJ – indeed, DJs usually not comfortable with improvising a lot of text will enjoy the well-written, extensive flavor text. The first room already establishes well the extreme game-show nature of the set-up: You have a winding corridor…of the bayou! Everything wants to eat the PCs and they only have 24 rounds to navigate air boats through its winding stretch; if they’re too slow, they’ll forfeit the treasure of the room! Oh, and beyond the buzzing swarms of mosquitoes, dire gars, animated Spanish Moss (that stringy, cool ropy moss you know from pretty much all the pictures), the PCs will also have a chance to down charity shots poured from a lizardman bartender and have I mentioned the water moccasin swarm? Yeah, a pretty furious beginning!

After that, we’re participating in a battle of the bands – the PC’s band (featuring Lizardman Henry, Johnny Sketch, et al.) jams it out against undead musicians rising from the bayou – and the competing bands actually influence the proceedings: The loser reduces the die on the dice chain. The opposition to the PCs would be a cadre of deadly were-nutria – the goal: Take out the enemy band, for each musician gone represents a decreased bonus for the checks to see who prevails. In the aftermath of this room, the DJ will open a water-chute the PCs have to take…and end 15-ft deep in gumbo; the lid of the titanic pot they ended up in is 15 ft. above them, as gigantic giant chefs loom (though tehse are illusions) – the PCs will have to balance on gigantic vegetables and fight the giant crawfish to the death…falling into the rapidly heating gumbo is detrimental to one’s health, just fyi.

After a brief hallway and break-room interlude (again, featuring chances to take shots – there are a ton of these!), the PCs will be introduced to a hilariously lethal piece of satire – the red tape golem, that can generate explosions of red tape to keep characters stuck, has an obscene reach and yep, trying to attack it may get your weapon stuck. A formidable foe indeed! After that, it’s not over – it’s NEVER over with bureaucracy – so the exit door here’s trapped: Razor sharp paper. One more form…argh….

After this, the PCs get to meet a celebrity: Pierre, the awakened turtle: Ancient and the only awakened animal to be accepted into university. He’ll pose riddles to the players – solve three and you’re good to go. Problem: he only speaks French. Okay, that would be no problem whatsoever at my table. However, if it is a problem at yours, be happy, for perceptive PCs can find a shroom to help them overcome the language barrier….but beware what you eat…Anyways, the PCs can attempt one answer per combat round, for they’re beset by variant Louisiana troglodytes while being quizzed by Pierre. As a minor nitpick – the sample riddles are in English. While I didn’t have an issue getting French riddles, having those as well would be nice for groups that want to flex their language-skill-muscles.

And after this one…it’s time to face the very incarnation of destruction Louisiana constantly faces – the big boss battle pits the PCs against nothing short of the storm – there is a reason a benign genius loci is here for them – they will need all the help they can get, for the fury elemental is not only unique and lethal – it can actually generate so-called storm assassins, made from rain, wind and lightning for a furious (Get it, fury elemental? Sorry, will punch myself for that later…) finale!

The module ends with the aftermath and a list of reliable charities that devote themselves to helping the affected areas and people.

Editing and formatting are top-notch, I noticed no glitches. Layout adheres to a printer-friendly two-column b/w-standard and the module sports several neat original b/w-pieces of art – kudos!! The cartography is nice as well, though no player-friendly, key-less map was included. Considering the nature of the scenario, such a map would have made no sense anyways and is not required, though. The pdf-version comes fully bookmarked for your convenience.

Written by Brendan LaSalle and George “Loki” Williams, this charity module was a blast to run. Beyond the cool idea of a charity product that you purchase depicting a charity Xcrawl, it is a fast-paced, versatile scenario: There is not a single boring or even just “good” encounter herein – each and every room, each challenge has something unique going for it, making great use of the special tricks the DCC-rule-set supports. Beyond that, it is a module that oozes charm and heart’s blood – from the novel and far-out encounters to the well-written prose, this module is an amazing experience.

Even beyond the confines of DCC and Xcrawl, this can make for an amazing scavenging ground if you need encounter ideas for planar material, a weird wizard’s past-time or similar gauntlets; pretty much each encounter could be scavenged as a form of highlight, capstone or unique set-piece. And it’s a charity product as well – one of the best I have seen, mind you, and one that would receive the self-same verdict if it was a regular offering – namely 5 stars + seal of approval. If you’re looking for something out of the ordinary and want to do a good deed in the process, then this is absolutely perfect. Get it!

You can get this unique, fun and creative charity module here on Goodman Games’ store!