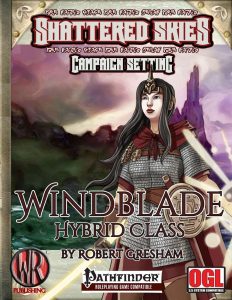 The windblade hybrid class clocks in at 12 pages, 1 page front cover, 1 page editorial, 2 pages of SRD, 1 page back cover, leaving us with 7 pages of content, so let’s take a look!

Windblades gain d8 HD, 4 + Int skills per level, proficiency with clubs, daggers, darts, quarterstaffs, scimitars, scythes, sickles, shortspears, slings and spears as well as light and medium armor and shields, excluding tower shields). Windblades get ¾ BAB-progression as well as good Fort- and Will-saves and they gain spontaneous spellcasting of divine spells drawn from the druid spell-list, with Wisdom as a slightly odd governing attribute choice for spontaneous spellcasting. The spells per day cap at a base per spell level and the class gains access to all full 9 levels of spellcasting.

They also begin play with a +2 bonus to Knowledge (planes) and Survival as well as the Eschew Materials feat. More importantly, windblades begin play with skybond – basically a bloodline-ish progression that nets Knowledge (planes) as a bonus class skill and bonus spells at 3rd level and every 2 levels thereafter, which are gained from a linear list. 7th level and every 6 levels thereafter, the windblade gets to choose a bonus feat from the list presented by the skybond, two of which are new, but we’ll get to these later. Additionally, they treat their caster level as 1 higher for the purpose of casting spells with the [air] descriptor and gain a linear ability progression: 1st level lets the fire a 30 ft. ranged touch attack arc of electricity, which, oddly, RAW deals untyped damage – pretty sure that should have been electricity damage. At 3rd level, the windblade gets DR 1/- and takes ¼ damage from falls. 9th level nets you the ability to fly, as the spell, 3 + Cha-mod times per day; you may grant the ability to another creature, but that takes two uses. Why isn’t this SP? It’s textbook SP and since the ability doesn’t tweak anything like activation action, I can literally see no reason this is Su. And yes, most annoyingly, spell reference instances where they’re not italicized can be found here.

At 15th level, the class can transform into lightning and blast forth…which sounds cool, but creatures in the path are affected by “your thunderbolt power” – guess what the class does not have? Bingo, a thunderbolt power. How did this happen? Well, the ability was cut copy pasted from the APG’s stormborn bloodline, which DOES have a thunderbolt power. Pretty sad that it hasn’t even been adjusted for the class after copying. RAW, this one is thus not operational. The 20th level capstone of the skybond is cool: You summon a whirlwind as a free action – this behaves as a 10-ft.-platform with a flying speed of 60 ft. The ability does not state a maneuverability class, only that the platform is as solid as ground – which can be problematic when used in conjunction with effects that decrease maneuverability. Cool: When using (non-italicized) spells to create objects, they may be weightless and float, but crumble when leaving your presence – I love this in-game justification for floating castles etc.

The class also gets to form a weapon of wind as a swift action. The weapon can be maintained for a total number of rounds equal to Wisdom and Charisma modifiers +6 and the weapon’s damage scales with your levels – columns for Small and Large windblades are included – kudos there! Starting at 4th level, you get to choose a bonus damage type to add to the weapon, which also scales over the levels. Slightly problematic: RAW the weapon’s damage is not noted: Fluff calls it electricity, though. The pdf also does not specify how sheathing/dismissing the blade should be handled. It does note, though, that the blade is treated as a light weapon. 2nd level provides woodland stride with another name (why rename it?) and 4th level provides a +4 untyped bonus on saving throws versus the SPs and SUs of elementals. 6th level provides the option to turn into an air elemental, akin to elemental body I, which increases in potency to II, III and IV, respectively, every 2 levels thereafter. Annoying: While this is obviously a modification of wildshape, the final paragraph still refers to wildshape instead of airbody, the ability’s proper name.

I mentioned feats. One increases the DR granted to DR 2/-. RAW, tehre’s a small conflict here: It may be taken multiple times, but since the feat specifically mentions the total DR gained in the end, subsequent feats don’t do a thing – it’s clear that the benefits, should stack, but still. The second feat, Enduring Weapon, interacts with the windblade’s ephemeral weapon and nets…a whopping +3 rounds of use. Yay? Worse, the text that notes the “Normal:” duration differs from the class ability’s text, stating “3+your wis and cha modifier”[sic!] *sigh*

The pdf also contains spells: Airblast, beneficent breeze, gale scythe, tempest hammer, trade wind and cyclone barrier from the Genius Guide to Air Magic by Rogue Genius Games. Wind churn from 101 1st level spells (without cleaning up the annoying “air damage” glitch the spell has – there is no such thing!)…and it reprints winds of vengeance from the APG. Why? What PFRPG group that uses 3pp material doesn’t at least have that book? So no, not one of the spells herein is new and none of them will have an influence on the final verdict.

Editing and formatting, particularly the latter, are not good. When even cut-copy-pasted material has hiccups…well. Yeah. Layout adheres to a nice two-column full-color standard and the pdf’s artwork is solid, color stock art that fits the theme. The pdf has no bookmarks, which constitutes a comfort detriment. Speaking of which: It is patently ironic that a pdf that reprints material copied from other sources has disabled the ability to highlight text or copy from it, which makes creating a character with this annoying, to say the least.

This is also an issue with the pdf as a whole: 4 pages and a paragraph are devoted to the class; the rest are reprinted spells from other sources. In the class itself, we have obvious cut-copy-pastes as well. Even if we disregard that, the class has some issues: One, it tries to do the godblade and isn’t particularly good at it, compared with other options out there; two, it is INCREDIBLY linear. The class offers literally no choice beyond spells and feats – windblades will be very much alike. And three, it is an example of squandered potential: The bloodline-y fighter is a cool concept and it is my firm conviction that the visuals and base engine of the weapon itself deserve better. Why lock the class into this one bloodline? Why not open it properly? Now, granted, if you can look past the rules-hiccups, there is some fun to be had here. And yes, the base chassis can be used. But this falls woefully short of what it could have done. With more options. Some sort of player agenda. Some actual editing to eliminate the problems. If someone sent me this as a draft, inquiring for feedback, I’d encourage them and tell them to keep working at it – I’d even be somewhat excited by it.

But this is not a draft. This is a published class. And whether I compare it to ethermagus, kineticist-options or one of the gazillion other classes out there, it falls woefully flat. Add to that the glitches, the reprinted material, and my final verdict cannot go higher than 2 stars.