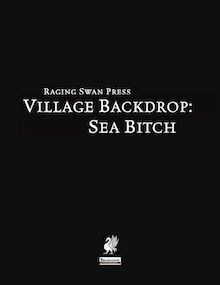 “Ugh…another maritime settlement. Let me guess…it’s pirate-themed?” That was pretty much my reaction to this supplement. And indeed, this also sport connections to Raging Swan Press’ neat Town Backdrop Deskport…but you would be missing out on a rather intriguing settlement if you experienced a knee-jerk reaction similar to mine. Why? Because this settlement pretty much is unique in quite a few ways, but first, let me note that this, as all village backdrops, sports a full village statblock, a marketplace, nomenclature, rumors etc. So yes, the level of detail we’ve come to expect is here.

Now the basic assumption is that Sea Bitch, nestled in a sheltered cove accessible only via sheer cliffs or one guarded approach, was founded by an all-female pirate crew. If you’re like me and have read Catherynne M. Valente’s “Orphan Tales” and hope for satyr sailors and selkie lovers, you would be slightly disappointed – but only slightly.

Why? The people of Sea Bitch have since the founding of the settlement utilized their unique talents for rather intriguing effects: For example, the local druidess (who gets a full statblock alongside her companion) has used her eagles to supplement the primarily piscine diet of the village with puffins and other sea birds. The proximity of orcs in the woods also results in some mingling, and the settlement does sport some half-orcs – overall, it feels ALIVE and very much concise.

As a rough and tumble haven for females in need, it also has, at times, quarreled with certain individuals in Deksport and sports tie-ins with Red Talon as well, providing a level of concise immersion that connects the respective pdfs in an unobtrusive manner. Now you may or may not care about this, but I was pretty much positively surprised in seeing what usually is relegated to subtext in plain text – the owner of the tavern is a hearty ship’s carpenter and has a lesbian relationship with the gorgeous bard who sings here. Personally, I’m not a big fan of the fact that she had to save her partner from an abusive ex-husband, but, quite frankly, I’ll take what I can get – kudos for providing the positive portrayal of a non-hetero-normative relationship in plain text.

Speaking of gender-politics – while the pdf somewhat does fall in the inversion-theme, with males being (mostly) mild-mannered, this does NOT extend to all of the males – indeed, this pdf manages to avoid the “let’s inverse the trope”-trap of the man-hating amazon-community quite well – well done!

Richard Greene and Raging Swan press pretty much did something pretty brave here – they made the mine-field that is gender-politics essentially the basic theme of a village – and if you take a look at the SJWs out there and the no less reprehensible opposition to them, you’ll realize pretty soon why I consider this “brave.” In fact, the writing is sensible and does the smart and only valid means of approaching the material in my book – as something not laden by ideology, as something normal. This is not transgressive fiction, it is a fun supplement, one that even made me, who at this moment honestly can’t stand to read yet another pirate-themed settlement, actually enjoy this pdf. Oh, and the tie-ins to other settlements, which provide a sense of cohesion to the pdf, also help in making the village feel alive and like something that makes sense. Finally, if this type of subject matter annyos you, just do it like Paizo does once in a while and present this as it should be – as is, without making a hassle about it – the settlement supports this reading as well.

While *personally*, I would have liked the magical aspect to be even more pronounced (being a fanboy of Catherynne M. Valente’s gorgeous prose), this is ultimately not something I can fault the pdf for. Hence, my final verdict will clock in at 5 stars + seal of approval – and a personal and heartfelt “kudos” for avoiding the (worst) pitfalls that come with the subject matter of gender.

You can get this village backdrop here on OBS and here on d20pfsrd.com’s shop!

You can also subscribe to Raging Swan Press’ patreon here!