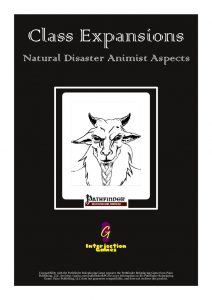 This expansion for the animist class clocks in at 4 pages, 1 page front cover, 1 page SRD, leaving us with 2 pages of content, so let’s take a look!

All 4 aspects provided herein are major aspects and the first would be the avalanche; it provides protection versus cold climates and gets a ice-sheet-based array of class level + Wis-mod temporary hit points.

For each major slot the aspect provides beyond the first, the animist class level is treated at +4 levels for the purpose of determining temporary hit points. Prominence 2: nets a 60-ft. line at 1d4 + class level, Ref to negate. Foes damaged can heal the animist’s array of temporary hit points (can’t be kitten’d, just fyi); at prominence 3, the damage is increased 1/day via a supercharge and grants more temp HP and prominence 4 nets the frost ability. 5 provides a final supercharge upgrade. Cool!

Pyrcoclasm would be next and adds explosions to objects damaged by the animist/creatures killed, provided they are taken apart/die at the latest the round after the animist damaged it. Prominence adds fire damage to weapon attacks. Prominence 2 extends the explosion counter to a minute; 3 decreases poison duration to 1 round for the animist, 4 adds +5 feet to the explosion-range and 5 adds the fire bonus damage to all attacks, not just the first.

The third aspect would be the tornado and increases movement rate and cause slashing damage to adjacent creatures of up to 1 per 10 feet moved, maximum Wis-mod. The latter cap can be enhanced for each prominence and 2 eliminates AoOs provoked beyond 20 feet of movement when charging, running, etc., emphasizing the skirmishing aspect. At 3 slots, you add a free trip to the first target beyond 20 feet movement. 4 lets you add an AoE attack as a substitute for the regular charge attack, based on slashing winds (cool!) and 5 adds increases to prominence 2 and 3 and also the speed quality.

The pdf also sports a cool new feat: Select a major aspect occupying 2, 3 or 4 major slots; this aspect loses the prominence each benefits, but is instead treated as +1 prominence…cool!

Editing and formatting are top-notch, I noticed no glitches. Layout adheres to Interjection games’ elegant two-column b/w-standard and the pdf has no bookmarks, but needs none at this length.

Bradley Crouch’s expansions for the animist provide some cool crowd control options to the class and feature complex tweaks of the relatively simple engine. The combo-potential is neat indeed and…well. I love this pdf. It’s cool, evocative and fun. 5 stars + seal of approval.

You can get this amazing little class expansion here on OBS!

You can directly support Interjection Games here on patreon!
Endzeitgeist out.