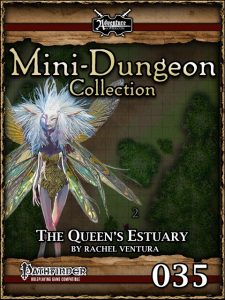 This pdf clocks in at 2 pages and is a mini-dungeon. This means we get 2 pages content, including a solid map (alas, sans player-friendly version) and all item/monster-stats hyperlinked and thus, absent from the pdf, with only deviations from the statblocks being noted for the GM.

It’s a marvelous day in the forest; the birds are chirping and all’s well…whether by accident or intentionally looking for it ( an adventurer vanished in these parts…), the PCs will notice a branch in the path…and if they investigate, they’ll meet a nasty pit trap…and see a campfire burning outside a simple hut, right next to a gorgeous pond….though that one’s inhabited by a water elemental. Nearby, there’s a stone statue…of the queen of a local swarm of none-too-calm sprites. Why? Well, a hag has turned the queen of the sprites to stone and now, the sprites want the PCs to undo the harm. Of course, they may have already done that, if they ran into the hag before, for she offers them food that nauseates the PCs: No save. No designation as a poison-effect…not a big fan here.

If, however, they attack the sprites, they’ll have a harder time getting to the treasure they offer…for that is guarded by liveoak’d bushes that may mutate into a treant when attacked by the foolhardy.

On a minor formal complaint, the pearl reward offered as an aspect of the module does not have a value or precise stats linked.

Editing and formatting are good, but not as tight as usual; I noticed minor formatting hiccups here and there. Oddly, the pdf does not sport the Series’ usual bolding for skill checks and the usual italicization for magic effects. Layout adheres to a beautiful 2-column full-color standard and the pdf comes sans bookmarks, but needs none at this length. Cartography is full color and surprisingly good for such an inexpensive pdf, but there is no key-less version of the map to print out and hand to your players. The pdf does sport one nice piece of original full-color art – kudos!

It should also be noted that the pdf offers some nice read-aloud text for GMs less adept at improvising text. Rachel Ventura’s “Queen’s Estuary” is a solid on-the-road sidetrek. It is somewhat unspectacular, but thematically concise and thus can be considered to be a solid, if not perfect addition to the series. The villain, usually a creature known from subterfuge, somewhat is restricted by the limited space available, making the villain frankly less effective than usual for the creature. Hence, my final verdict will clock in at 3.5 stars, rounded down.

You can get this on-the-road sidetrek here on OBS!