Fearsome Foes Volume I: The Ravenous

Fearsome Foes Volume I: The Ravenous 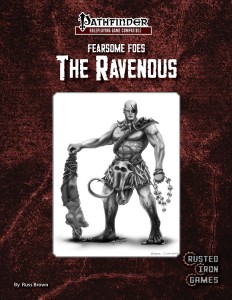 The first installment of Rusted Iron Games’ fearsome foes-series clocks in at 5 pages, 1 page front cover, 1/2 page SRD, leaving us with .5 pages of content, so let’s take a look!

This pdf’s premise is pretty straight-forward – to deliver monster codex-style statblocks of creatures – this time featuring two ogres from the eponymous, roving horde of straightforward ogre-marauders. The first of these creatures would be the ogre depicted on the cover, one Kurhn Bonecrusher – a CR 13 brute that has, built-wise, had his HD increased and the barbarian creature template applied.

The second ogre would be Urusk the Iron turtle, named thus for the preference of heavy armor – and his discipline, for the ogre has 5 fighter levels.

Supplementing these two characters would be two magic items, the first being the merciless maiden, a magical greatclub made from a marble statue of a woman (COOL!) that allows for a 90°-variant of whirlwind attack by foregoing all attacks. (If one were to nitpick this, one could state that foregoing all attacks could use further clarification, but the intent is clear and so this gets a pass.) The other item is a truly nasty rattle – this one can change cure spells in the proximity into inflict spells 3/day. I really love this concept, but in practice, this is kind of problematic – while powered as an immediate action and action-wise, the item is pretty solid. EDIT: The item has been cleaned up and now works well.

The unfortunate layout-choice in the previous version has been taken care of. On the plus-side, beyond these solid hooks, the pdf also sports 5 different sample encounters that utilize creatures from the Monster Codex alongside statblocks provided herein.

Editing and formatting are pretty good, I noticed no relevant glitches. Layout adheres to a pretty printer-friendly two-column full-color standard and the pdf sports a cool, original b/w-artwork of Kurhn -especially nice in such an inexpensive pdf. The pdf comes fully bookmarked.

Russ Brown’s first fearsome foes provide decent builds – personally, I think class-levels would have suited Kurhn a tad bit better, but that may just be me. It should be noted that the statblock does contain the base stats, assuming raging as default. Personally, I would have preferred a slightly higher degree of optimization, but that’s just me being a prick. I do like the supplemental items, though the wording, while not bad in any way, is still not as precise as I’d like it to be. The insertion of the statblocks, which cuts the adventure hook-section in two, also felt jarring to me.

All in all, this is a good pdf for the low asking price – the fixing of the skull rattle nets this +0.5 stars, for a final verdict of full 4 stars.

You can get these solid monsters here on OBS and here on d20pfsrd.com’s shop!