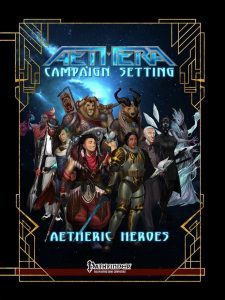 This supplement for the Aethera Campaign Setting clocks in at 48 pages, 1 page front cover, 1 page editorial/ToC, 2 pages of SRD, 1 page advertisement, 1 page back cover, leaving us with a total of 42 pages of content, devoted to 10 pregens for the setting, so let’s take a look.

Now, in a nice touch, we have something cool on the inside of the front cover: The glorious drawing of the Aethera system is reproduced here and sports icons of the respective pregens, contextualizing them within the system itself.

Now, let us take a look at the pregens, shall we? The first thing you must be aware of, would, alas, be the fact that, unlike other pregen books by Legendary Games, this one does not sport scaling notes for 15- and 25-pt.-buy campaigns, which may constitute a slight detriment for some groups. The heroes contained herein all are made with 20-pt.-buy as a baseline. On the plus-side, you’ll notice how the increased page-count means that we get rather detailed notes on each of the characters, and indeed, the book goes into details regarding all of the characters, more so than in most comparable pregen books.

The first character herein would be Aleta, an infused spell sage wizard, who encapsulates the inherent tragedy of the infused race very much: The loss of former identity, the second loss of purpose after the end of the Century War…and now, a man in his apparent 60s, prematurely aged by the aetherite coursing through his veins, his Survivor’s Guilt gnaws at him. We get a massive and detailed write-up of his experiences during the Century War as well as a new 1st level spell, searing sight, which is a variant of darkvision that is contingent on concentration, but allows the spell to be discharged for an offense option that may set a target ablaze.

The okanta cavalier Arakhu, lion-faced and potent, hails from a long line of shamanas, hoping to hear the song of the stars…but alas, it was not to be and thus, bitterness turned constructive, as the okanta forged a name, he also gained a speeder…and thus, his path as an aethership pilot was set, his deeds and the rush of battle finally igniting within his heart the song he so long had wished to hear…and thus, a new purpose was forged, a new hope kindled.

The Arcline club in Complex Four started off as a dive in one area of an asteroid most known for its organized crime. Tapping into noir aesthetics and the classic concepts, it is here that you can listen to the self-proclaimed shaman of sound, the phalanx cantor known as Chapter, his melody speaking of the dreams of joy and sorrow, his flute-longspear both instrument of creation and destruction. The build, mechanically, is supplemented by the Combat Balladeer feat, which nets a combined instrument weapon as a military identifier at 1st level, while also providing some clout with the Protectorate. We learn about the journey of self-actualization undertaken by Chapter, and how he became known by his name, instead of Twelve-Nineteen. Soulful and in tune with the universe itself, the music of chapter encompasses the notions of dream, which may make for a strange choice for the phalanx race, but the overall depiction of this fellow is inspiring in the best of ways.

Chernardra, the okanta shaman, is a bear-faced speaker for the past; born as a fiercely independent woman, she considered the new arrivals on her harsh world, the alliances of more open tribes, to be nothing short of betrayal – and thus, she struggled, fought and raged against the giants, against those that dared cross her fierce tribe…but, alas, progress may not be halted and the rage that consumed her was only quelled after many a grievous loss of time, of energy – hers is a tale of prejudice and the evil it may cause, of an ideology overturned in the face of absolute disaster, a tale of an epiphany to a more enlightened state of sorts, but one in which she remains rather conflicted, as the Song of the Stars guides her course.

Erryn the hunter is tech-bonded – and, as the pdf notes, if he were to meet one of the hacks writing romanticized notions of life in the Wastelands, he’d punch him in the face. Born to an unregistered sorcerer-for-hire, he had to grow up without him, as the father was either caught or killed, never to return. Living a hard-knock life, Erryn tried to bring home money, to help as best as he could, but ultimately, the threat of capture made him look for a way out, towards respectability…and indeed, the construct, shaped like a fox and broken – and it was only when some aspect of the Progenitor Code awakened in him and his machine, that he managed to shake off the yoke of his childhood follies…but he’d need to leave. His connections from way back still looked for him, and the near-death experience of awakening has obviously pointed towards a destiny greater than he could have fathomed…

Haüyne, a first-generation phalanx, was activated on an assembly-line, designated Six-Thirteen; only slowly awakening to realities beyond the grim battlefields of the Century War, Haüyne was forced into a life that must be considered to be highly traumatic for any sentient being, and the awakening of sorts, the breaking point did come and the order she carried out, was brutal indeed. In the aftermath, the voices of dissent that haunted the airwaves…and before the tragedy of revolution, of martyrdom, came, the baffled phalanx were granted citizenship, as te powers that be washed their hands of them. Thus, Six-Thirteen put as much space between herself and military, adopting a peace-name, and indeed, her path led her to become an inspector, stemming the tide of smuggling and drug trafficking. She is a snoop unchained rogue, btw., and she comes with a repair kit as part of her starting stats.

Kasara would be another human, a fighter and aether soldier (archetype reprinted for your convenience, fyi) – interesting here would be that her arc is one of the redemption of her disgraced noble name, but this redemption, in itself, is problematic, as it ties into the experiences of Haüyne – but the full-extent and overlaps between characters is something I can’t, or rather, won’t, discuss in this review. To an extent, the extensive prose of the detailed character backgrounds touches a plethora of amazing concepts and ideas…and, indeed, I’d frankly consider this book worth getting for the stories alone.

Now, if you’ve been wondering, fret not, for the Erahthi also come with a sample NPC – the alchemist Oemathra-Koth, who found, and lost what may have been a unique proof of ancient civilizations, handing it over to the Tritarch. Forced into developing biological weapons and bearing witness to the horrors of the Century War firsthand, Oemathra saw the Taur theft of one of Kir-Sharaat’s moons that signaled the end of the Century War, as not a defeat, but as a chance for both Erahthi and Humans to unite against a common foe, for a chance of coexistence – for hope.

The second infused within the book would be Surestra, a brawler with the titan archetype, who has lost much of her erstwhile identity and knowledge, in the racial trauma of the infused; at the same time, she and her team, with whom she shared dreams and thought, saw slowly the dissent growing…but then, the war ended. Abruptly. Mercilessly. Worse off than even the phalanx, the infused were considered to be abominations; menial, degrading work awaited and the post-war era broke apart her new family, while her old one considered her an abomination. Only after hitting rock-bottom did she formulate one more plan, one chance to burn bright before her existence would inexorably be ended by the aetherite coursing through her body. The build also includes a feat that allows for a combination of unarmed fighting and gunslinging, Unholstering Strike.

The final pregen herein would once more be an Erahthi, namely the hydrokineticist Tillannieh; a result of experiments and bioengineering, she seemed destined to become one of the child-soldiers to serve in the horrid Century War, but as a sensitive child with ostensibly limited potential to access her latent powers, she was forced into a life-and-death combat by her handlers in an attempt to awaken her magical might. Cruel and traumatizing, it nonetheless worked, making her a potent, magical killer, but in one particularly grueling mission, she turned her back on her indoctrination, on her people, and in a realization of the importance of agency, she chose her gender and individuality and bided her time in exile. Now, fully grown, she has a couple of scores to settle, some lives to actually save…

Editing and formatting are very good on a formal and rules-language level. I noticed no serious hiccups. Layout adheres to the gorgeous 2-column full-color standard or Aethera supplements. The artworks for the pregens are fantastic full-color pieces, though they will be familiar to owners of the campaign setting book. The pdf comes fully bookmarked for your convenience.

Ryan Billow, Siobhan Bjorknas, Robert Brookes, Jeff Dahl, BJ Hensley and Julia Nardin deliver my personal favorite pregen book so far. Now, on a formal level, one can complain to a degree about the lack of notes for other point-buy-.standards and for the fact that the characters don’t come with leveling suggestions for higher levels.

Honestly, this time around, I couldn’t care less. Why? Because the characters in this book are multifaceted individuals that may share specific story-threads, but who can exist, easily, on their own; because their extensive, evocative backgroundstories are so embedded in the rich lore of the setting that I frankly didn’t want to put down the book. Their promises of mystic destinies, their arcs and supremely-captivating prose made me want to play them all. Power-wise, they all are approximately on the same level as well, mirroring their respective ordeals in intriguing ways. In short, they are efficient characters, without feeling like soulless minmaxing exercises OR without being a character with a cool story, hamstrung by dubious choices regarding mechanics. In short, this is a really inspired little book, well worth getting for the glorious prose alone.

How many pregen books can claim that? Exactly. This is seriously worth getting. My final verdict will clock in at 5 stars + seal of approval.

Missed the Aethera Campaign Setting? You can find this phenomenal setting here!