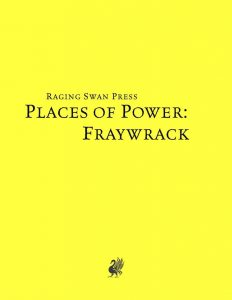 Following the tradition of the series, we do get notes on Lore and the appearance of local folk, as well as the nomenclature employed. The 6 events and rumors further enhance this unique constellation of characters – from harpies not being too keen to be forced to play with their food to drunken sailors, there is an intrinsic tension that suffuses the set-up that, by means of its very definition, is upset by the arrival of PCs.

The system-neutral version has been properly converted, using the correct old-school classes in the brief, fluffy descriptions of named NPCs and the pdf even sports a small marketplace section for generic, minor magic items (healing potions) and consumables to be purchased. Kudos there! The lore-section, just fyi, has similarly been given over to the GM to do as s/he pleases, as befitting of old-school gameplay. Minor complaint: The text at one point mentions a couple of specific magic items to be found – some flavorful descriptions would have been nice here; it’s not hard to find and covert them, but yeah.

Editing and formatting are very good, I noticed no serious glitches apart from the aforementioned oversights. Layout adheres to raging Swan Press’ elegant two-column b/w-standard and the pdf comes fully bookmarked for your convenience. The b/w-artworks are amazing pieces. The pdf comes in two versions, one optimized for screen-use and one optimized to be printed out. The cartography by Maciej Zagorski is well-made and in b/w. Supporters of Raging Swan Press’ patreon can get access to a player-friendly, key-less version of the map, at least to my knowledge.

Jacob W. Michaels’ Fraywrack s creative, cool and unique – the idea is simple, but the execution is frankly inspired and chock-full with roleplaying potential. In short: This is an amazing offering and a great example for the cool things you can do with the Places of Power-formula. My only complaints here are nitpicks – hence, my final verdict will clock in at 5 stars.