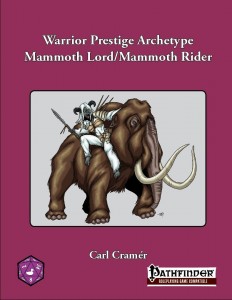 So this time around we get double the dose of Prestige Archetypes, so let’s take a look! Both mammoth lord and mammoth rider feature d10 as HD, full BAB-progression and good fort-saves. However, the differences still become readily apparent from the get-go: The mammoth lord uses the cavalier as chassis, the mammoth rider instead utilizes the ranger, which results in 4+Int skills per level and 6+Int skills per level, with the latter obviously also receiving good ref-saves. They also sport the same proficiencies with simple and martial weapons, light and medium armor and shields minus tower shields. As a minor nitpick that will not influence the final verdict – somewhat of a pity to see no support/upgrade of the primitive weapon group.

But let’s start with the mammoth lord: At 1st and 6th level, we may choose from a short list of survival-themed bonus feats and obviously, 1st level challenge (usable +1/day every 3 levels). The steed, the signature creature of the PrC, gets full proper synergy with other classes and as a plus, it does cover a slightly enhanced list, also sporting the mawgriff among the eligible mounts. On the nitpicky side, the ability as such does not specify explicitly that this class feature functions as animal companion, though, admittedly, the pdf makes the intent as abundantly clear as possible without explicitly stating.

Mammoth lords also receive wild empathy and may use it to demoralize animals and magical beasts. Mammoth lords add Str-mod to said checks and also add this to the DC required to intimidate them. I do btw. enjoy the decision to move the “Mistrust of Magic” ability down to 3rd level. Expert trainer is gained at 4th level and combined might, what amounts to the PRC’s signature combat trick, has been moved down to 5th level. 8th level sees the size-increase of the steed to huge size, which, on a nitpicky side, should mention that it’s Huge (long), not Huge (tall) – but then again, this is me being OCD about this kind of stuff and the text does specify without chance of being mistaken reach et al., the intent is clear, though I still would have liked the direct specification, especially since higher levels sport a further reach-upgrade. Higher levels provide fast mount/dismount-options and the pulverizing assault ability thankfully remains in the higher levels. The capstone of the PrC also features as the PA-capstone and scaling over the levels is pretty organically dispersed – here, this is definitely what should be considered the most impressive component regarding balancing.

The Mammoth Rider, as the ranger-based build, gets full favored enemy progression and begins play with track and the demoralize-upgraded aforementioned wild empathy. Unsurprisingly, 2nd level and every 4 thereafter see combat style progression, including e.g. finesse and natural weapons styles and the survivor-themed bonus feat-list has been moved to 3rd and 7th level. Mount-size-increase to huge is also at 8th level here and at the same level, we get swift tracking. On level later, mistrust of magic is gained and colossus hunter, an ability the mammoth lord does not get, is gained, increasing its potency at 16th level – combined with favored enemy, that can net some solid bonuses! Now while 11th level nets quarry, combined might is relegated to 17th level for the mammoth rider, with the high-level abilities having a similar dispersal as the mammoth lord’s.

The favored class options provided for base races and Ith’n Ya’roo are solid in both instances – where those of the mammoth lord focus on steed improvement, the mammoth rider’s FCO focus well on the more skill monkey-ish style of the class. We get sample NPC-builds for both classes at level 1, 5, 10 and 15 and the mammoth lord gets a new magical lance. As a cool courtesy, we thankfully also receive full stats for the respective mounts.

Editing and formatting are very good, I noticed no glitches. Layout adheres to Purple Duck Games’ printer-friendly two-column standard and the pdf comes fully bookmarked and sans art apart from the cover. On the formal level, I know this is probably going to elicit some groans, but I noticed that the text does once switch between declaring the characters as male and female, using “She” and “his” in the same sentence, when the pdf otherwise remains concise regarding the convention of using the iconic’s gender and sticking to it. No, this is not a bad glitch.

Carl Cramér is slowly but surely hitting his stride – the base mammoth lord PrC is abyssmal in my opinion – cool in concept, but unfocused and bland in its execution. These two WPA, in contrast, not only provide a tighter focus for each build, they also put player agenda and choices much higher on the list than the base PrC did. And yes, I really, really like this installment for it. The cavalier-based build in particular is JUST what the doctor ordered when you want a way to mechanically represent the huge-creature-rider that smashes with high velocity through the ranks of his foes. – combined strength, cavalier charges and challenge combine to deliver truly devastating offensive capacities. What’s also pretty impressive about these two WPAs would be the fact that they play rather radically different – which is interesting, considering how much overlap between them exists.

So yes, this is one of the good installments in the series – one bordering on the great even – but at the same time, I sincerely wished there were none of minor ambiguities, which, while not rendering the rules opaque, still exist. If you need an analogue, imagine you were a teacher and read this as a great assignment with a bunch of minor punctuation glitches and the like (no, in this way the pdf is pretty fine!) – though you love it and consider it a task well done, you can’t rate is as highly as you’d want to. This is how I feel here – I enjoy this installment and it’s only the accumulation of minor hiccups that slightly tarnish this – hence, my final verdict will clock in at 4.5 stars, rounded down to 4.

You can get this cool installment of the series here on OBS and here on d20pfsrd.com’s shop!