Animal Races: Clan of the Dog

Animal Races: Clan of the Dog 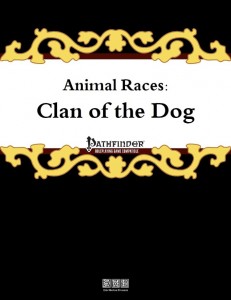 The first installment in Eric Morton’s Animal Races-series clocks in at 11 pages, 1 page front cover, 1 page editorial, 2 pages of SRD, 1 page back cover, leaving us with 6 pages of content, so let’s take a look!

The Clan of the Dog essentially encapsulates an array of therian humanoids of the adlet subtype that exhibit canine traits – race-trait wise, they receive either +2 Wis, -2 Int or +2 Wis, -2 Str – depending on whether size small or size medium is chosen, for both variants exist. Base speed clocks in at 0 feet for medium, 20 feet fr small member of the Clan of the Dog and these fellows also receive low light vision, scent, +1 natural armor (which later scales up by +1), a primary bite attack at 1d4 (or 1d3 for small ones) and a racial heritage:

A total of such heritages are provided, each netting either +2 to Dex or Con and allowing you to select Dog Clan Trickster or Dog Clan Heritage as a fighter feat, rogue talent etc., depending on the clan you’ve chosen. As a minor complaint here – the benefits of coyote, tanuki and fox are identical, which feels like a lost chance to add further diversity. Interesting would be the option for members of the wolf-clan to become a wis-based witch.

Now the interesting thing here would be the decision to utilize the aforementioned two feats, which can be gained via class features, as a catch-all gateway for a plethora of abilities to be chosen upon selecting the feat – faster movement, better bite and yes, even pounce and the iconic tripping bite. Oddly, fast movement is featured twice in the list. EDIT: I botched here – while the list of traits does include a couple of abilities like pounce or tripping bites, the feats themselves have a caveat that poses a level-limit for the traits themselves. I honestly have no idea how that could slip past me. I apologize.

Generally, though, I have to say that I am positively surprised by one of the most modular race-builds I’ve seen in quite a while. More than that surprised me the scope of this little pdf. I’ve read quite a few anthro-races so far and none really captured me. They mostly felt like race xyz with vaguely canine abilities slapped on. I never got the appeal of the concept, so I shrugged and moved on. What this book hints at and what sets it apart would be the cear of intelligent detail and proper research obviously put into it. What do I mean by that? well, beginning with proper age, height and weight tables, we move on to the conflict between law and chaos as basis for the clan’s theology and central moral conundrum and go on to a short deity write-up of a moon-deity, extensive information on folklore of the clan on related monsters and humanoids like agathions and kitsune and delve further into heraldry (!!!) and its symbols, which also double as traits. This latter combination is a sheer stroke of genius. Regalia and resources, up to customs like usually assuming a higher status for those that walk before others – this pdf manages to cram more awesome fluff into its scant few pages than many books of thrice the size- to the point where I am honestly stoked to read more installments of the series.

Editing and formatting are very good, I noticed no significant glitches. Layout adheres to a 2-column b/w-standard, is printer-friendly, elegant and nice. The b/w-artworks throughout the book are thematically fitting and the pdf comes excessively bookmarked with nested bookmarks.

“Urgh. Another anthro-race-pdf. How great is that. *sigh*” – that was in a nutshell my initial reaction. Boy was I WRONG. In spite of its brevity, this book manages to be better balanced and narrated, more captivating – simply a more intelligent book than many that sported much more pages. The implication that all Clan-pdfs will have links via genealogy etc. just adds further oomph to perhaps the very first truly compelling take on anthropomorphized animal-races I’ve seen. Full of detail and joyfully entwined fluff and crunch, this is actually not only a good supplement, it’s fun to read as well. This is serious business in all the right ways – smart, intelligent, full of flavor and mechanically highly modular to boot. EDIT: My one gripe with this one was me botching big time – hence, the final verdict is upgraded to 5 stars + seal of approval!

You can get this damn cool pdf here on OBS!