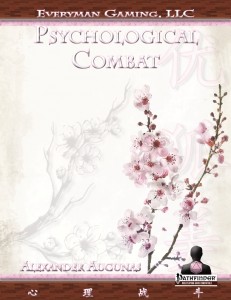 Now this pdf kicks off with the crucial question – what is this pdf and why use it. First of all – feint and demoralize are the odd rules components out when compared to Pathfinder’s otherwise streamlined combat maneuver mechanics – this pdf streamlines this to introduce a psychology DC. The DC would be 10+ HD+wis-mod or 10+sense motive bonus, whichever is higher – simple, easy to calculate on the fly – so kudos there. But also, at least so far, not that new.

Where things become more interesting would be with the new antagonize action. This can be used via Bluff, Diplomacy, Intimidate or Handle Animal, depending on creature targeted. Also depending on the skill you use, on your creature type in relation to the type you target, etc, we receive different benefits. If you successfully manage to antagonize a foe, you hamper their options to execute AoOs etc. – essentially, this would be “drawing aggro” from targets akin to Path of War’s Warders, only for every character and better balanced due to a better scaling DC-system/presence of a DC in the first place. The pdf also fixes Demoralize by including the rules for fear immunity/mind-affecting components, fixing a whole in the rules. Kudos!

The pdf also (re-)introduces morale from the old-school days; When prompted, a morale-check is a d20+wis-mod – if the result exceeds your morale DC, you become shaken, scaling with degrees of failure – while from a rules-aesthetic point more in line with old-school gaming, this solution actually makes mathematical sense, since it cancels effectively the wis-mod out of the equation – this means you usually won’t be hampered much by morale unless you botch big time, though. It also means that the roll boils down to d20 vs. 10+HD or 10+sense motive ranks + bonuses (sans attribute bonuses) – this renders quite a few creatures effectively immune regarding morale and also extends this to quite a few characters. While so-called morale events and their triggering modifiers can modify the roll Generally, I don’t think the general morale-rules are particularly effective or well-crafted – while I did enjoy the old morale rules, I think a more streamlined solution less dependant on luck may have been a more prudent solution regarding this system.

After a short piece of aptly-written IC-prose, we are introduced to new class options to help against the effects of psychological warfare – alchemists receive a new cognatogen, barbarians a means to antagonize and deal damage as well as a mini-archetype focused on provoking foes. Brads may learn a new masterpiece to AoE-antagonize foes with a scathing satire and fighters may opt for a lightly-armored master of wits. Witches receive a hex which allows them to declare targets antagonized against her allies, while still reaping the benefits of the condition, while rogues receive talents for better feat qualification, feinting, teamwork feats and even the inquisitor’s solo tactics. Beyond that, treating flanking allies as qualifying for teamwork feats is a neat advanced talent, while the rapscallion mini-archetype is better at psychological warfare and may sneak attack foes that are demoralized, etc. (go synergy with Dreads, for example…); the rapscallion loses evasion, though, so be cautious…

Speaking of inquisitors – these guys receive a new inquisition which allows them to use wis instead of int for the purposes of feat-prerequsites. The true winner here, though, would be the cavalier: Not only does this poor, under-supported class receive a nice new order with the Order of the Dazzling Lotus – an order devoted to heroics, righteousness and one’s country and also a master of seeking retribution and inflicting scathing tirades upon his foes. Now Braggarts are perhaps one of the most interesting archetypes I’ve seen in quite a while – so inflated is their ego, these guys do treat EVERY combat as a performance combat. This mechanic and its way of bringing performance combats and its effects into game are elegant and damn cool – kudos! The second archetype for the cavalier would be the challenger, an archetype that has essentially an antagonize-based variant of solo tactics- interesting as well, if not as iconic as the braggart.

A total of 7 feats, each of which also comes with a second, mythic version, have been provided herein – combining maneuvers with antagonizing targets, ranged feinting,, using wild empathy for psychological warfare versus beasts. Especially interesting – the improved/greater variants of the maneuvers: Improved antagonize decreases the action-type it takes, while its greater variant allows you to plant a suggestion for a specific tactic in your foe’s head. Generally, interesting and well-crafted feats.

The final page offers a total of 7 new traits, 4 combat, 3 social – tying wis to intimidate instead of cha, better resistance versus taunts, using cha to determine your psychology-DC or better intimidation versus kids and animals – all there. And yes, I do like the fact that there’s such a trait in here – after all, we all knew that *one* woman or man down the street we ALL were afraid of, since we knew they hated children…

Editing and formatting is generally very good – I did not notice significant glitches that would have impeded my understanding of the rules presented herein. Layout adheres to a nice, beautiful and printer-friendly 2-column full-color standard with several neat pieces of original full color art. The pdf comes fully bookmarked for your convenience.

Alexander Augunas is not a novice designer, and it shows – the explanation of the rules herein is pretty concise, easy to grasp and mathematically feasible. The new antagonize option is glorious and something that has been absent from games for too long. Additionally, the fixing of demoralize et al. was long overdue. The supplemental class material and feats are all solid and humble pieces that show their coolness factor maybe not at first glance, but they do show up – and some gems herein deserve praise indeed.

So all glorious? Alas, no. The morale-system feels like an afterthought and quickly comes apart once one crunches the numbers – I’m not sure whether its relatively limited usefulness at higher levels is intentional, but its comparatively inelegant rules (especially if one knows Alexander’s other work) strikes one as a system not implemented to its logical conclusion – also due to the relative brevity of morale events and their implications. My final gripe is aimed at the trait-section and the fact that the system, as written, has no options for characters who derive their psychological fortitude from their intellect – I do love the inclusion of cha, so why not cover int as well? Fiction is full of people whom you can attack all you want until you deconstruct and surpass their intellectual foundations, so that component feels like an oversight to me. The same issue applies btw. to morale – the basis solely on HD and sense motive does not survive casual contact with in-game logic, capable leaders with high cha or smart strategists – the system needs to be MUCH more complex to properly work.

Psychological combat is a glorious little pdf that suffers from the limitations imposed by its brevity – the streamlined system begs for further additions, complex mind-games and supplemental material – and while it does offer these bits and pieces, there definitely is room for quite a bit MORE. Add to that the fragile morale system and I cannot rate this pdf as high as I’d like to. Since this sounded pretty negative, let me spell it out – this is a great pdf for the streamlined psychology-maneuvers and the supplemental content; Just be aware that you may need to add minor bits and pieces here and there and don’t expect too much from the morale-rules. My final verdict, for the glorious components herein, will hence clock in at 4 stars.

You can get this inexpensive, cool pdf here on OBS and here on d20pfsrd.com’s shop!