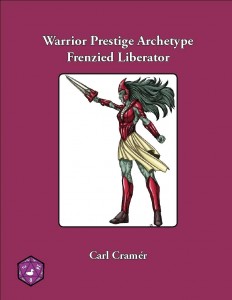 So, if the title wasn’t ample clue, the frenzied liberator would be a combo of the barbarian and the liberator PrC. As such, the class receives full BAB-progression, d12, good fort-saves, 4+Int skills per level, proficiency with simple and martial weapons, light and medium armor and shields.

At first level, the class receives fast movement and rage (the latter scaling up to greater, tireless mighty rage at 11th, 17th and 20th level, respectively) and 2nd level delivers uncanny dodge, 5th improved uncanny dodge.3rd level and every 3 levels thereafter, the class receives Trap Sense (getting progressively better, of course.) Starting at 4th level, these bonuses are also applied to saves vs. poisons, tying both abilities together in a neat way – like it more than the base PrC’s solution of fixed numbers. At 6th level, this PA’s version of lockbreaker instead applies the trap sense bonus on Str-checks to break down thing, on attacks versus objects and on Escape Artist-checks to escape bonds etc. – once again, a much smoother solution than the PrC (and thankfully, more efficient).

Speaking of “like it more” – at 2nd level, the class receives “To the Rescue” – when raging, all allies within 30 ft. receive a +4 morale bonus on Escape Artist-checks and to saves versus fear effects – much cooler and more organic than the PrC’s clunky version of said ability. At 7th level and every 3 levels thereafter, the frenzied liberator receives DR, at 8th level a bonus feat…and at 10th level, the silent sunder ability – make no more noise while breaking chains, whether by sundering or strength-checks. Two thumbs up!

At 12th level, these guys may ignore *A LOT* of hardness and 14th level frenzied liberators receive +4 to will-saves to resist enchantment spells. Steely Resolve’s wording is actually more precise than in the PrC. At 16th level, darkvision-extension may be a bit late to the party, but the 18th level ability to break objects as swift actions ROCKS. Picture me going full blown Arnie: “AI VIL BREIK EFRYZING YOU OUWN!” Like it! As a capstone, casting freedom of movement 1/day at full CL may not be too impressive – but being subject to it without it being dispellable/there being any option to counter it – permanently…well, that’s nice!

The pdf sports FCOs for the core races as well as for the avoodim, though here, a couple of glitches have crept in – the FCO for half-elves speak of low-light conditions when the usual terminology refers to “dim light” etc. and the ones for elves lacks the “ft.” behind the one – yeah, nitpicks and in both cases, you know what was meant, but still. Also: While humans can reduce fatigue after rage, that becomes useless with tireless rage. Here, a high-level alternative/trade-in would have been nice.

The pdf closes with the traditional NPC-builds for 1st, 5th, 10th and 15th level, but this time around, we also receive a nice, aptly-written background-story for the NPC – nice, as it renders teh character more than numbers!

Editing and formatting are very good, I noticed no significant glitches beyond the level of the FCO-nitpicks. Layout adheres to Purple Duck Games’ printer-friendly two-column standard and the pdf comes fully bookmarked and sans art apart from the cover.

I expected to not like this pdf. I absolutely LOATHE the Liberator-PrC. I think it’s a classic example of boring, bad design that tarnishes a cool idea. The concept is great, the PrC…not so much. Enter Carl Cramér’s take on the trope and know what – seeing how much I dislike the framework, I have to admit to liking what he has done with the less than stellar pieces he worked with. The tying of abilities together renders the class smoother in execution and the unique, new abilities can be considered pretty much fun enablers that render the base concept underlying the assumptions of the PrC more valid. The Frenzied Liberator resounds with the trope of the freedom-loving barbarian and should be considered superior in style and execution when compared to the sum of the parts used to build it. That being said, I would have loved stealth-enhancing, perhaps scaling methods of silent liberation sooner. Still, as written a solid installment in the series and well worth a recommendation as a good 4 star-file.

You can get this solid warrior prestige archetype here on OBS and here on d20pfsrd.com’s shop!