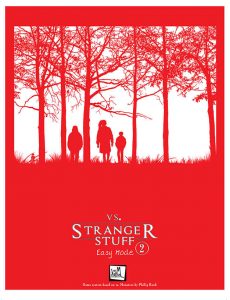 This version of Vs. Stranger Stuff Season 2 clocks in at 34 pages, 1 page front cover, 1 page editorial, 1 page ToC, 1 page advertisement, 1 page SRD, 1 page back cover, leaving us with 28 pages of content, so let’s take a look!

First things first: This review was requested by one of my patreons. The Easy Mode version of Vs. Stranger Stuff Season 2 is basically the refined and updated version of Season 1, and as such still contains the original pdf in the downloads. I strongly suggest going with the proper Easy Mode Season 2 upgrade – the rules are significantly more precise.

Now, this pdf is everything you need to play the Vs. Stranger Stuff adventures released for season 1, and indeed, anything in that regard. However, at the same time, even a cursory glance at the page-count in comparison should make clear that the full version sports a LOT more, interesting options, including the other difficulty levels. Let it be known, though, that the supplement, while obviously a teaser of the full Vs. Stranger Stuff Season 2 experience, is NOT cripple-ware. This is fully functional on its own and the pdf is FREE, the print at-cost at a paltry $3.00, which means that this supplement is great to check out whether you like the basics of the system. As a humble aside from yours truly, I consider the other difficulties presented in the big book to be superior. The different difficulties are briefly explained herein, but this pdf focuses on the basics.

We thus begin with a summary of what’s required for play, which is basically just one or more decks of cards as well as players and paper/pencils. The pdf includes a list of possible inspirations.

Okay, as in Stranger Things, we play kids, who have two attributes: Brains and Muscles. Starting attribute dispersal can be 5 in both or 4 in one, 6 in the other. The numerical values determine how many cards you draw when facing a challenge. There also are Good and Bad Gimmicks. You pick two Good Gimmicks and one Bad Gimmick at character creation: These can include cool, older siblings, further modifications of the attributes, etc. – and on the bad side, we get e.g. broken homes, being a klutz, having overbearing helicopter parents, etc. Every character starts at 10 toughness, which are basically the hit points of the character, though Gimmicks may modify that.

Equipment is handled in a relatively rules-lite manner, potentially requiring that the kids get gear that kids usually wouldn’t have by creative means. Sans roleplaying, it takes a draw to get it successfully: Compare the value of the card to the EV of the item. EV stands for “Equipment Value”, just fyi. You may attempt to get as many such equipment pieces per session as your Brains value dictates. Paired items, like walky-talkies, increase the value by 2 if you want both; this does not apply for items sold in bulk like nails or M&Ms, obviously. Sample values of how hard it is to get items are provided for your convenience. There, done: You can start playing right now – and the pdf has the character-sheet right there.

The next section deals with gamemastery, first explaining the core mechanic: Like the equipment example, you basically draw cards and compare the value of the cards to the TV, target value of the challenge. Actions that are directly opposed are resolved via competetitive drawing, higher card wins. Teamwork uses the character with the highest attribute, +1 card per person helping. Yeah, teamwork is powerful!

Suits mean something: The red suits, hearts and diamonds, are good suits with generally favorable results; the black suits are generally negative, with spades being worse than clubs. This is relevant when e.g. using a simple draw, i.e. drawing a card to get a general notion what happens, and can be really neat to help the GM decide on how an action pans out.

Combat is measured in turns, with turn-length adjusted to suit the needs of the story; player to the GM’s left goes first, in order; after all players acted, the GM’s monsters, NPCs etc. may act. Movement is similarly handled in an abstract, narrative manner, assuming the kids to be able to move a “moderate” distance; anything beyond that may require a test on brains or muscles.

You can perform one attack per round, or one complex action. Small actions like flicking on a light switch, etc., are free. Melee attacks work by comparing Muscles with the target’s DV – Defense Value. Ranged attacks are executed against the higher of DV or RV – RV denotes, bingo, the “Range Value.” The target numbers parallel btw. those of other actions. Damage depends on the weapon used: Fists or improvised weapons cause 1 point of damage, advanced weaponry like power tools 3.

As long as a character has 6 or more Toughness, all is fine; below that, the pain begins hamper them. At 5 toughness, the kid suffers -1 to both attributes, for being in minor pain. Having only 2 Toughness increases this penalty to -2 and 0 Toughness means -3 and extreme pain; -1 toughness means being knocked out, -2 means death. Resting for an hour regains 1 Toughness, 4 hours let you regain 5 and a full night of sleep nets 10 Toughness. First aid and pain killers can help against pain, obviously. And that’s basically the whole combat section as presented herein.

Beyond that, we get stats for 4 different adults, a sample kid and 11 monsters, ranging from greys to werewolves etc….and this is pretty much where the booklet ends. If you want the PCs to have unique stuff (i.e. items)…well, the big book has sentient robot buddies, working x-ray-goggles or spells and supernatural powers like pyrokinesis, parasitic regeneration, etc. A sample NPC with powers, 13, is provided and the pdf continues to provide a list (not comprehensive, btw.!) of further goodies from the big book. Attacking objects, fear, fire and fireworks, hazards, endurance over time, an extended GM-chapter. Rules for games within games, lucky lighters, a nice chapter on world-building and a sample mini-setting all are in the big book.

…yeah, in case you haven’t noticed, I very much suggest you get the big book if this setting/system even remotely appeals to you.

Editing and formatting are very good, I noticed no serious glitches. Layout adheres to a 2-column b/w-standard with nice b/w-artworks, though this version does fall short of the full-color splendor of the big book. The pdf comes fully bookmarked for your convenience.

Lucus Palosaari’s expansion of Rick Hershey’s original season 1 pdf is something I applaud. Instead of taking season 1’s pdf down, we get a full-blown improvement in rules-integrity and precision, as well as a more than doubled page-count. Now, it is pretty evident that this version cannot, and doesn’t try to, replace the massive, proper Season 2 book. Instead, it should be considered to be a handy teaser for the vastly expanded Second Season book; a means for new groups to check out the game without any risk, courtesy of the pdf being offered for FREE. Now, in direct comparison, this obviously falls short of the big book; it can’t reach that level of depth and quality in these few pages. At the same time, this *is* a fully functional game, which is a pretty big plus as far as I’m concerned.

How to rate this, then? Here, things get tricky. You see, this pdf lacks a lot of what made me really, really love Vs. Stranger Stuff Season 2’s full book. It remains a good offering, but unfortunately, I have read the full version before this one, so I can’t help but compare the two, and the big book is my favorite VsM-Engine game released by Fat Goblin Games so far. That being said, this is a perfect way of checking out whether the engine and type of game works for you and yours…and that’s how the pdf is intended. As a whole, I think this is worth checking out if you’re curious about the system. Hence, my final verdict will clock in at 4.5 stars, rounded up due to in dubio pro reo and the fact that this is FREE.

You can try out these rules for FREE here on OBS!

You can get the big, proper book of Vs. Stranger Seasons 2 here on OBS!