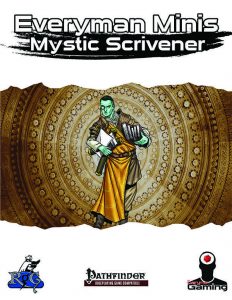 This installment of the Everyman Minis-series clocks in at 7 pages, 1 page front cover, 1 page editorial, 1 page advertisement, 2 pages of SRD, leaving us with 2 pages of content, so let’s take a look!

The pdf begins with a sidebar describing the basic understanding of the multiverse the scriveners are supposed to have, elaborating upon the concept of the Language of Creation. After this brief summary, we dive into the proper archetype; the mystic scrivener is an investigator archetype that alters alchemy: Instead of the usual benefits, the mystic scrivener adds the bonus to Linguistics and Profession (scribe). Additionally, the mystic scrivener gains read magic as a constant SP and may cast arcane mark at-will, changing which runes, markings etc. make up his mark whenever casting it. The mark consists of a number of letters or markings equal to 6 + class level; the scrivener uses class level as caster level. Instead of preparing extracts, the scrivener prepares baubles with esoteric phrases; the scrivener must read these aloud (requiring verbal components). The scrivener gains Esoteric Linguistics and Psychic Sensitivity at 1st level, ignoring prerequisites.

The mystic scrivener may choose from an array of additional, archetype-exclusive talents: Esoteric writings nets one spell from cle/oracle, psychic or sorc/wiz-lists, learning the spell as an extract. If the spell can be found on multiple lists, it uses the highest spell list. Alternative, the investigator may choose two spells from any of the lists, but they must be one level lower than the highest level investigator formula available for preparation. Exorcising sigil lets the scrivener use two uses of inspiration to duplicate the second effect of protection from evil for 10 minutes per class level. Promethean scrivener nest prerequisite-less Craft Construct, substituting Linguistics ranks (!! Important – not the cheesable overall skill!) for CL, and Linguistics fro Craft to create constructs. The scrivener may use extracts instead of spells as prerequisites, but does not otherwise ignore spell prerequisites. Golem-maker, anyone? Prophetic dreams is a 1/day option to write something on his forehead before going to sleep, gaining augury after an hour; 9th level upgrades that to divination, 15th to commune (both spell references are not properly italicized). The scrivener may also learn Scribe Scroll, allowing him to scribe scrolls of formulae known, using investigator level as CL. This does not allow spells that don’t qualify to e turned into scrolls. Finally, the scrivener can gain the voice of the grace revelation of the bones mystery, using Intelligence and class level to determine its effects.

At 9th level, the archetype replaces the investigator talent with the occultist’s magic circles, using class level as occultist levels for the purpose of their power, and uses of inspiration instead of mental focus to activate them. Instead of 11th level’s talent, the scrivener gains the occultist’s outsider contact class feature, once again using investigator levels as occultist levels and inspiration as a stand-in for mental focus.

Editing and formatting are very good – apart from two missed italicizations, I noticed no hiccups. Layout adheres to Everyman Gaming’s printer-friendly two-column b/w-standard and the artwork is nice. The pdf has no bookmarks, but needs none at this length.

Matt Morris delivers a cool archetype here: The mystic scrivener as an investigator obsessed with the occult is an interesting angle and I enjoy the execution here. My only true gripe here is that the archetype, conceptually, probably could have carried full-blown class-hack levels of modification. I could easily expand the tricks of the archetype further, adding more unique talents etc. That being said, what is here is nice indeed. My final verdict will clock in at 5 stars.