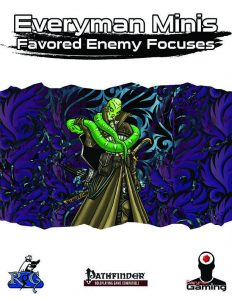 All right, after a brief introduction, we get the new Focused Favored Enemy Combat-feat, which requires fifth level to take. It nets the character a focused favored enemy option and may be taken multiple times, with every additional time requiring +5 ranger levels for the prerequisites. Alternatively, when gaining 5th level, the ranger may elect to gain a focused favored enemy option instead of choosing a new favored enemy; existing favored enemy progression still happens when such a switch is made and some options sport prerequisites; these options work against all creatures that qualify for the purpose of a favored enemy chosen, and references to the favored enemy bonus refer to the bonus granted against the specific creature. Important: Favored enemy focuses may not be chosen by characters that traded favored enemy for another ability, nor be prestige classes or similar options that granted, unless the option explicitly specifies otherwise – nice angle, since it makes the engine somewhat future proof.

Anyways, we do get quite an extensive array of different options: Unless I have miscounted, we get to choose from a total of 21 such options. One such option would be aimed strikes: When attacking a creature with a manufactured or natural weapon or a ranger spell, DR of the target is reduced by the favored enemy bonus, to a minimum of 0; only DR/adamantine, piercing, bludgeoning or slashing may be thus reduced, tying the ability into skill rather than a supernatural angle. Nice touch there. Another option lets the ranger use a swift action to challenge a favored enemy properly identified as such, increasing favored enemy bonuses to damage by 50%, with ½ the highest favored enemy bonus also governing the number of times per day this can be used. Such challenges impose a -2 penalty to AC, though.

Focused Casting adds favored enemy bonus for ranger spells only to the spell’s CL as well as checks to overcome SR and spell save DCs, if any. Focused defense nets Favored Defense as a bonus feat; with multiple favored enemies, swift action allows for the switching of benefits to another favored enemy. He may use the benefits of this ability ½ highest favored enemy bonus times per day. Wait, what? The feat nets an always-on boost; the favored enemy focus adds no per day component…to what does this limit pertain? Switches of favored enemies that apply the feat’s benefits? Or does the feat require activation when gained by the focus? Honestly not sure here – this should be more precise.

We also get a smattering of combat maneuver specialization focuses, which often require specific feats at prerequisites: Focused bull rush allows the ranger to end his successful bull rush in any space of a favored enemy; Focused dirty trick has the wrong prerequisite – pretty sure, it should not be Improved Bull Rush. The focus extends dirty trick’s inflicted condition duration by ½ favored enemy bonus. Focused disarm requires Greater Disarm and, when successful and having a free hand, the ranger can catch or either wield, stow or drop the disarmed item. Focused drag makes the ranger count as a number of size categories larger than ½ favored enemy bonus; focused overrun and reposition work the same way, but the latter also states the wrong feat – it should be Improved Reposition, not Improved Overrun. This would be as well a place as any to note that the respective focuses using half bonuses should probably specify rounding up or down and/or a minimum. Focused grapple lets the ranger roll weapon/unarmed damage twice when maintaining a grapple versus a favored enemy, adding results together before adding bonuses.

Focused steal is interesting: It lets you steal fastened items sans DC-increase and even closely worn items, though at +5 or greater to CMD. Really cool! I am pretty sure that the “Improved Sunder” focus should be named Focused Sunder, analogue to the usual nomenclature of the other focuses. The focus allows the sundering of unarmed or natural weapons, which are assumed to have 1/10th of the creature’s hit pint total; if a natural attack has half its hit points remaining, the target takes -2 to atk and damage with it and may only threaten a critical hit on a natural 20. Fast healing and DR applies and healing effects add their effects to all natural weapons. Weird here: Unarmed strikes are exempt from the second part of the ability; while their inclusion is obviously intended, it still struck me as odd. Focused trip makes creatures that are tripped by 10 or more require a standard action to stand up, in spite of e.g. kip-up etc.

Editing and formatting are per se good, but feel a bit rush – the cut-copy-past glitches are unnecessary and a few of the rules-components could be a bit more precise in the details. Layout adheres to Everyman gaming’s two-column b/w-standard and the artwork is nice. The pdf has no bookmarks, but needs none at this length.

Favored enemy and similar nemesis-type of abilities are notoriously hard to make them work properly; too potent, and you marginalize the threat of the targets; as a situational benefit, it must remains potent, though. Oh, and favored enemy as a base ability, is simply not that interesting. The idea of favored enemy focuses, adding some active abilities and agenda to the chassis, is one I absolutely adore. That being said, the execution feels uncharacteristically rushed for author Luis Loza and Everyman Gaming. The small hiccups accumulate pretty quickly over the course of the brief pdf, in some instances influencing rules-integrity. Since some focuses use the highest bonus and some the specific bonus due to balancing concerns, it’s somewhat harder to determine a proper baseline. As a whole, I love a lot of what’s proposed here, and indeed, the concept is cool and worthwhile. That being said, I have to rate what is RAW here and, well, that aspect leaves a bit to be desired in a couple of instances. Thus, while I maintain that this has serious potential (and most GMs should be capable of making it work properly with minimum work), I can’t go higher than 3.5 stars, rounded down for the purpose of this platform.

You can get this conceptually cool, if not perfect pdf here on OBS!