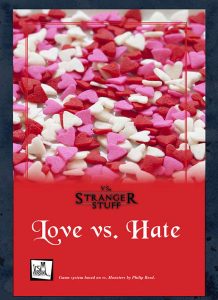 Now, it should be noted that this review was requested by my patreons. Also, the module was designed for the first and less refined season of Vs. Stranger Stuff – it is fully compatible with the significantly-improved second season and in the context of that game, it works a an easy-mode scenario regarding difficulty.

All right, so the premise of this one is simple: There’s a Valentine’s Day dance, and if we know our 80s-nostalgia, that’s a big deal. It becomes even more relevant: You see, two GODS, namely Ares and Aphrodite, have put on a private wager: Aphrodite’s chocolates provide “Love”, while Ares’ punch nets “hate” – the former is associated with brains as an attribute, the latter with muscles. Drawing the right cards may see you invited to dance…or turn hostile.

Things become more complicated, once Ares conjures forth a Kobalos, who attempts to tip the scales in his favor, and who represents the one potential monster to defeat herein. And that’s already pretty much it, though it should be noted that, whatever’s the result, the surviving characters will get permanent attribute boosts.

Editing and formatting are okay, I noticed a few minor typo-ish level of glitches. Layout adheres to a one-column full-color standard and the pdf has no interior artwork, but needs none at this length. The pdf has no bookmarks, you don’t need those either at this brevity.

Ben Dowell’s “Love vs Hate” is a very basic set-up for the GM. The two gods feel somewhat out of place, and the kids don’t have a good way to deduce what’s actually going on, or to resolve the influence of the meddling gods – apart from playing their game. From a narrative perspective, this is very barebones, though the mechanics to govern and develop the evening are rather neat and dynamic and deserve applaud. The adventure/encounter itself pretty much requires that it’s run as part of a longer campaign. Without paradigm-shifts in NPC-relationships (and the usual drama that comes from them!), this loses its raison d’être. In short, this requires, to properly work, that you have established characters, NPC-associates, etc. Without this, things will become dull and lack the gravity of “Stephanie no longer talks to me!” “Did you see who Jack danced with?” – the dance can be a great catalyst for roleplaying and changed social dynamics, but it is contingent on the GM to make it shine as such. However, at the same time, this humble pdf comes as PWYW, and for that, is most assuredly is worth checking out! As noted, the drawing mechanics employed for resolution are interesting. All in all, this is a very brief ad rather rudimentary, but generally interesting set-piece. My final verdict will clock in at 3.5 stars, and while I’d usually round down, considering its PWYW-nature, I can justify rounding up here.

You can get this nice set-piece/encounter here on OBS!