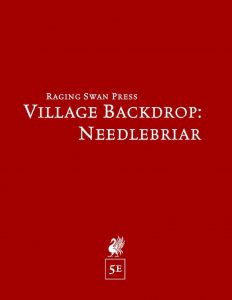 The supplement, as always, does sport the classic components we’ve come to expect from Village Backdrops – i.e., we get notes on the nomenclature of the locals, their dressing habits, etc. As always, we get rewards for PCs that do the legwork: Village lore may be unearthed and, as noted before, we do get a couple of whispers and rumors. However, in this pdf, we can see the fruits of Raging Swan Press’ patreon support in a rather impressive manner: For one, we do get write-ups for no less than 6 different NPCs, which have btw. been properly assigned 5e-stats from the default NPC-roster, where applicable. The write-ups do contain e.g. notes on gender and the suggested class levels for the characters; the write-ups are fluff-centric and as well-crafted as we’d expect from John Bennett.

Now, where we’d expect the marketplace-section, we instead get an evolution of the formula: We still have the general marketplace section, but move one step beyond. You see, while it’s not new to see sample notes for costs of taverns and food/etc. to be included in village backdrops, we now have the individual locations sport the notes for specific services and items, which have been properly converted to 5e. This is surprisingly convenient: Instead of a more or less abstract marketplace, the services and goods are allocated to the places where they can actually be purchased. However, there is more going on: John Bennett, back in the day, introduced a serious array of dressing to a couple of his older settlements, vastly increasing the flavor or the places. Needlebriar does sport a pretty impressive list: A table of no less than 20 entries can be used by the GM to really amp up the tension and unique flavor of the place.

Unusually humid days may see dogs panting loudly…and some of these dressing/entry-sections can be used as events to jumpstart the action…there is, for example, one entry where a badly mauled, bloodied man is running down the streets…so yeah, there is a sinister angle to the village, but I am NOT going to spoil it…or the reason for the strange twitches that seem to plague a lot of folks from the local population. Beyond these, we get a great b/w-picture of the settlement and notes on the surrounding area, allowing the GM to better situate the village within the individual campaign setting. Another improvement over the classic formula of the Village Backdrop formula would pertain the respective entries for the locations of interest: Instead of having a single 6-entry event table, we have individualized event tables for the respective locations (under the “What’s going on?”-headers), which adds a further level of customization to the settlement. As a minor note of complaint: One of the entries for local events still refers to the PFRPG-save – that should be Constitution and the condition should have been changed. So yeah, the respective events can actually sport rules-relevant components.

Editing and formatting are top-notch, I noticed no serious hiccups apart from the save-conversion-relic. Layout adheres to Raging Swan Press’ elegant two-column b/w-standard. The original b/w-artworks are impressive and the cartography of the place is excellent and in b/w. The pdf comes fully bookmarked for your convenience. As always, we get the pdf in two versions: One optimized for screen-use and one optimized for the printer.

Yes, you can use this as a backdrop, but it is strong enough to work as an adventure on its own as well. While the leitmotif is not necessarily new, the prose elevates it in its evocative execution; the added convenience and focus on usefulness at the table further add to the value of this pdf. Needlebriar is a phenomenal supplement, even in the context of the Village Backdrop-series and the insane quality-level the series has established. While the conversion relic is slightly annoying, it is not enough to drag down what must be considered to be a great supplement. All in all, this is fantastic village, well worth 5 stars + seal of approval – if you’re looking for a great environment to explore, this delivers in spades.

You can get this awesome village here on OBS!