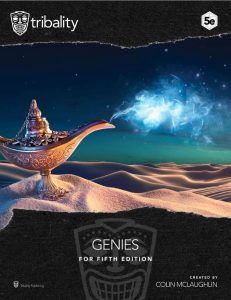 This supplement clocks in at 22 pages, 1 page front cover, 1 page ToC, 1 page SRD, leaving us with an impressive 19 pages of content, so let’s take a look!

Know what’s curiously underdeveloped in 5e so far? Well, d’uh, genies. As such, we begin with a summary of the psyche and social organization of genie-kind, speaking of the addictive qualities of genie-power (if you’re fluent in German, the underground-rockband Caputt made a whole album on the concept: “Djinndustrie”, which translates to genie-industry…); genies are potent, but as you can e.g. tell from the efreet as depicted in Catherynne M. Valente’s second book of the Orphan Tales saga, their interaction with mortals is more complex than you’d expect – the boundaries of master and slave are fluid and their elemental natures have, for a long time, made them significantly more interesting, at least to me, than most other denizens of the elemental planes.

After a brief general overview, we begin with short descriptions of the ruling bodies/organizations of the genies: From the blazing citadel (get City of Brass’ boxed set if you can!) to the Earthen Court, the House of the Tempest and finally, the Vigilant Council, these organizational contexts help elucidate the alien nature of genies – it may be a small thing for you, but I absolutely love that we get some proper lore to contextualize them. The write-ups on the respective ideologies are inspired indeed. From this context, we move on to not just some paltry, general stats (which would probably become invalid as soon as WotC publishes “official” genie material) – instead, we focus on unique NPCs, one for each of the elements.

One of the sultans serving the pasha of the Earthen Court gains the title “Armor of Mercy” – in this instance, that would be mighty Khem-Nefer, who clocks in at an impressive challenge 16. He is frickin’ EPIC. He comes with legendary actions and is nigh unstoppable. Why? Not only can he turn into sand to pursue his foes, he also gains massive healing when he does not expend all of his legendary actions. Oh, and resistance to physical damage when he acts that way. Really cool, though, apart from a very minor formatting hiccup, the clinging sand ability: I get that creatures can pass it on (which is cool!), but what does “become inundated with clinging sand” mean, rules-wise? As written, it seems to be just a set-up for his petrifying legendary action, but sense-wise, the ability feels like it could inflict a condition like restrained. Just sayin’. On the plus-side, we actually also doe get lair actions for his earthen keep! These are cool, though a spell-italicization is missing.

Nafurat Min Al-Atham would be the Fountain of Misdeeds, who also clocks in at a mighty challenge 16. Once again, we have cool interactions with legendary actions – this time around, the option to target creatures adjacent to the target of his attacks. Now, as I am a hardcore bastard, I will make this bonus damage drench targets – something that RAW only the geyser ability does (which, oddly, deals cold damage). Why? Because drenched targets may be drowned via a legendary action that costs 2 of them. And it makes more sense in game. I get the rationale for the design as written, but personally, I think water bursts and torrents strong enough to cause damage should qualify as drenching foes. We get lair actions as well – beyond missed spell-italicization, one duplicates a spell that has at-higher levels variants and thus may have warranted a note there – just as a cosmetic observation. This would be as well a place as any to note that, while as a whole the average damage-values can be found herein, they are not present everywhere – they are e.g. missing from one lair action of Khem-Nefer, Nafurat Min Al-Atam’s torrent bonus damage…you get the idea. This does not impede the functionality of the genies, but yeah. Something to be aware of.

The champion of fire depicted herein would be Nahas Al-Aizdira, the Lady of Clanging Bells (once again, you guessed it, challenge 16), follows a similar design: We get a reflexive fire shield for retaining legendary actions, and one of them costs 2 legendary actions for a particularly nasty effect – but requires the setting-up via another feature, namely immolate. Problematic here, from a rules-integrity perspective: “A creature that is immolated..:” is the requirement – and RAW, the immolate ability does not “immolate” targets – it just renders them frightened and deals continuous fire damage. Yes, it’s clear what’s meant, but still. As the other genies, she can turn into her element while moving, but unfortunately, this movement, oddly, does not cause fire damage to targets. Here, a bit less redressing and more customization would have made sense. This would be as well a place as any to note that “attacks of opportunity” do not exist in 5e – the correct terminology is “opportunity attacks.”

The final of the mighty genies, Murat Al-Huzn, the Mirror of Sorrow, follows the same design paradigm established for the other genies. One of his legendary actions, alas, is a mess: He creates copies of up to 3 different creatures he can see. Okay, where? Next to him? Next to the creatures? At any place? These copies mimic the actions of the copied targets. Okay, do they roll their own attacks or use the ones of the characters they copied? No idea. I get what this tries to do, but RAW, this doesn’t work. That being said, the 2-action cost legendary action of this fellow is properly codified (though missing average damage values).

The second chapter of the pdf is devoted to exclusive spells of the genies: 4 cantrips are provided, which include a conjured bow that fires arrows of lightning, an earthen shield that protects against mundane missiles, a lance of fire that you can hurl or wield in melee and a maul that deals cold damage and grants temporary hit points. These cantrips are interesting and suggested classes are noted – though it should be said that all are pretty potent. Big plus: Each spell comes with a flavor-paragraph that makes it feel more than just a collection of rules. We also get 1st and 4th level spells for each of the elements. Cool regarding the 1st-level spells: They interact with the cantrips! They have regular benefits and basically allow for the buffing of the cantrips for a combo choice that enforces player agenda – in the example of the lightning arrows, you create e.g. static fields of lightning. Pretty cool concepts! That being said, the spells note “The next [insert cantrip name] you cast before the end of your turn (the spells can be cast as bonus actions) creates xyz…” – does this mean that only one such cantrip spell is enhanced during the 1-hour duration? Or does this apply to ALL of them? The latter would be pretty overkill…A discharge/end-wording-caveat would have made sense here.

The self-buffs gained at 4th level are pretty cool, sporting 3 benefits (one has 4): One resistance, and one or more special action/bonus action/reaction options. The final spell, blessing of the wind princess, fails to specify to what the reaction-use applies, though. Power-wise, they are all pretty potent.

The final chapter deals with 11 genie-themed magic items. These are pretty cool: The armor of the martyred Khedive sports three defensive abilities, powered by its charges; beads of miracles generate major illusions (spell slot properly noted!), which is cool. The sentence: “typically, 1d4+1 beads of farce[sic!] are bound together.” Is, however, symptomatic of the editing glitches that haunt this pdf. Carpets that burst into flames, heavy dinnerware that can be used as weapons (inflicting what type of damage?), a gem that can add fire damage to bows…interesting. Pretty potent: There is a globe that nets advantage on initiative and lets you swap initiative with the target, over which the globe hovers. Okay, so how far can it hover? Is it restricted by boundaries? Do you get to choose your ally? What is the trigger-requirement for the reaction? Cool idea, problematic execution. Gloves that can grant necrotic damage claws or summon insect plagues, a cursed hat the nets stinking cloud, but penalizes your Charisma checks and saves, a weapon blessed by water, which helps versus ice…there are a lot of cool items here. On an aesthetic side, e.g. the spear of the earthen court lacks the bullet point type presentation of aforementioned armor, which was weird, but is not something I’d penalize this booklet for.

Editing and formatting are the crux of this pdf – they feel rushed on both a formal and rules-language level. Layout adheres to a 2-column full-color standard and the artworks are the photography-stlye pictures I’ve come to expect from and like in Tribality’s offerings. The pdf lacks bookmarks, which constitutes an unnecessary comfort detriment.

Damn. You know, I love Colin McLaughlin’s genies for 5e. I really do. They OOZE passion, flavor and play well; the GM gets some nasty, cool tricks to pull off here. While all use the design design-paradigm, that may be intentional to create a sense of cohesion. It’s not what I’d consider problematic. However, I do believe that some modifications to account for elemental peculiarities would have made them shine even more. The spells and magic items, while not perfect, also breathe a deep love of the subject matter, and are, dare I say it, inspiring. This pdf has all the components of a 5 star + seal of approval gem. While there are no artworks for the genies, I have always preferred substance over shiny artworks; give me a cool critter sans art over a broken mess any day of the week.

Which brings me to the issue at hand: As inspired as this is, it seriously could have used a strict editor. I stopped counting formatting hiccups at one point. There are a lot of missed italicizations etc. More relevant and pretty grievous: There are issues in the rules-language that compromise the RAW functionality of the options herein, minor hiccups in the math…you get the idea. They accumulate to the point where I can’t unanimously recommend the pdf as much as I’d dearly love to. While the small glitches accumulate, it is the big ones that truly drag this down from the lofty rating-perches that it deserves.

Don’t get me wrong – I can totally see where all the raving reviews for this file come from: At $2.95, this offers a neat bang-for-buck ratio and oozes flair. I like to picture roleplaying game design as both an art and a craft: The artistry can’t be taught; you either have it, or you don’t. This pdf has this component, in spades. It does falter, however, in the department of craftsmanship – not in the general craft of the design itself, mind you. The overall impression a cursory analysis provided, was one of a file I’d celebrate for being amazing. But once you take a look at the details, the issues accumulate, the imperfections show. The good news is: This aspect can be learned rather easily.

This is, to my knowledge, the author’s freshman offering – it is thoroughly impressive for that. But at the same time, not even the freshman bonus that I grant new authors can make me round up here; for that, the obvious and often glaring minor hiccups are too numerous. My final verdict will hence clock in at 3.5 stars, rounded down. I hope this will be revised at one point. Dear author, if you read this: Please don’t be disheartened. Keep creating. You have potential.