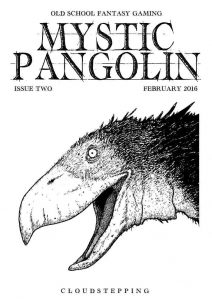 The second installment of the Mystic Pangolin ‘zine clocks in at 40 pages, 1 page front cover, 1 page editorial, 1 page ToC, 1 page SRD, 1 page advertisement, 1 page back cover, leaving us with 34 pages of content, laid out in 6’’ by 9’’ (A5) digest style, meaning you can potentially fit up to 4 pages on a sheet of paper when printing this.

As in the first installment of the ‘zine, the rules-system employed would be Swords & Wizardry, though it should be noted that conversion to another OSR-system is pretty simple. In contrast to the first issue, this one only features one system-neutral article: This one deals with a means to dispense treasure in the shape of textiles: 12 different entries are provided in neat descriptive detail, covering bolts of cloth, tapestries, tabards, mantling, bear-sarks and mummy wraps. Oh, and human skin suits. Ew! This section of the pdf was rather inspiring!

The second article within introduces us to 4 fully statted entertainers belonging to a traveling troupe, all of whom come with background and aims. The social relationships between these folks are rather neat, and each of the NPCs get a b/w-artwork mugshot. Rather cool cadre of NPCs, particularly since they buck the trend of evil carnies. These folks are actually interesting and well-rounded. The pdf also contains monsters – to be more precise, 5 different terror birds based on real world lore, including man-sized penguins, the moa, argentavis, etc. The cool artwork on the cover and a scale-comparison with a human help contextualizing this section.

The Ports of Call-section also returns, with this time around a superior offering: Walrus Bay is an icy, polar settlement perfect for e.g. LotFP’s “Weird New World” – the settlement, with its forward hospitality and the dangerous (and fully statted) local walrus makes for an interesting place to visit. Threats like giants and trolls and wendigo are also included alongside a random treasure table. We also get a rather cool magical figurine, the owl of Arianhrod, which can bestow darkvision. And yes, I meant darkvision, and the pdf does explain the difference to infravision and the decision behind going for that one. On the downside, this time around, we do not get a map for the settlement, which is a bit of a bummer.

The ‘zine also includes an adventure, “ The Haunting of Kilderkin Fell”, which is intended for characters level 4 – 7 – and which is surprisingly forgiving and easy for an old-school module. The module is a pretty simple investigation and should be resolved within a single gaming session. Notable: We get heraldric crests for the nobles involved, a fact I considered to be a nice touch.

As always, the following contains SPOILERS. Potential players should jump ahead to the conclusion.

All right, only referees/GMs around? Great! So, Lord Doric of Kilderkin Fell requires the assistance of the PCs – the lord has fallen comatose under the strange assaults of shadowy creatures. The haunting is, however, just the culmination of the past’s misdeeds: Doric’s older brother, fair Andwan, was once caught attempting to use the dark arts on the dead, or so the record goes, and thus was exiled. Only that this isn’t true – Andwan was framed. Without funds and support, he has nursed a grudge over the years, and now punishes the usurper with the help of his magics and accomplice. Doric’s mind/soul is actually imprisoned in a tapestry while his body languishes, and a series of clues can lead the PCs to the truth. This frame-work, which includes a random encounter table, is pretty solid, and apart from a bone construct, also not exactly demanding to figure out – mostly due to the lack of detail when it comes to the mansion. I strongly advise you to flesh this out with your preferred haunted house generator – otherwise, this may be a tad bit too simple. The module is better than the generic adventure in #1, but suffers from its brevity.

Editing and formatting are very good on a formal and rules-language level. Layout adheres to a 1-column b/w-standard, and the pdf comes with surprisingly nice b/w-artworks. That being said, the pdf has no bookmarks, which is an annoying comfort detriment.

Blackie Carbon’s second Mystic Pangolin is a bit more refined than the first installment, and the writing, particularly for dressing and the NPCs/monsters is per se inspiring and nice. However, the module takes up a lot of space that could have been devoted to better content…or not enough. It depends on how you look at it. I generally love such gothic tales as the one the module tries to tell, but these do live and die by the atmosphere they manage to evoke, and the module simply doesn’t have the room available to properly realize its potential. That being said, this installment is still worth the low price point. As such, my final verdict will clock in at 3.5 stars, rounded up due to in dubio pro reo.