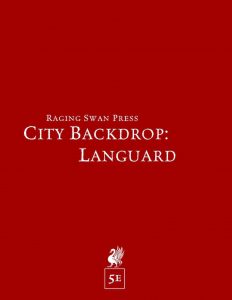 The 5e-version has had its DCs, where applicable, converted correctly, and NPC statblock-references point towards the defaults established. The magic item market place has similarly been adjusted to reflect 5e’s aesthetics.

Creighton Broadhurst succeeds at a rather impressive task: To provide an overview of a massive city in just a few pages, to depict the complexities of daily life and the differences in tone and character of the different quarters; you will not confuse any of those locations with one another, and the pdf contains enough hooks, dressing and ideas to make Languard come to life…and best of all, there is actually a whole series devoted to going into depth regarding the individual sections of the city. Guess what I’ll be covering next? 😉 Anyhow, this supplement succeeds in presenting an overview of a city that breathes old-school vibes, that feels positively medieval. Languard sports this gritty, Greyhawk-ish vibe I enjoy; the same atmosphere that you got from the grimy cities depicted in the Witcher novels. The 5e-version is just as strong as the PFRPG-version, and thus, also gets a final verdict of 5 stars + seal of approval.

You can get this awesome city here on OBS!