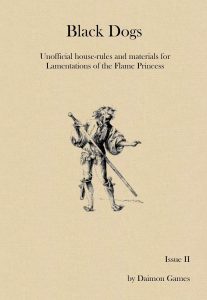 The second installment of the Black Dogs ‘zine clocks in at 47 pages, 1 page front cover, 1 page back cover, 1 page blank, 1 page ToC, 1 page editorial, 1 page SRD, 2 pages explanation/index and roadmap of what’s presented when, and one page is a call for English native speakers/editors. This leaves us with 39 pages of content, laid out in 6’’ by 9’’ (A5), so let’s take a look!

Now, let’s recap for a second of what this ‘zine is and how it differs from most such supplements: Black Dogs is basically a cross between a collection of house-rules and a setting-hack; it is based on Lamentations of the Flame Princess (LotFP) rules and differs in focus by being set slightly before the early modern period/its beginning. The implied setting assumes that the PCs are members of the supra-regional Black Dogs, basically an anti-monster taskforce, which, while deemed necessary, is not by any means beloved. As you can glean from this premise, the focus here lies on dark fantasy, rather than full-blown horror, but LotFP’s magic-tweaks do lend themselves well to the playstyle. If you’d need a one-page summary, I’d probably consider this to be a cross between LotFP and Warhammer. Each player controls more than one PC, and is expected to alternate between them – this can be rather nice and prevent PC fatigue.

There is something I need to make clear here: This is basically sequential rules presentation, and that makes it exceedingly hard for me a reviewer to properly judge whether the tweaks on rules etc. are valid within the context of the implied setting; this is a system immanent issue of the presentation in its sequential form and a component I commented on in my review of issue #1. A central focus of the ‘zine would be the conflict between civilization and the wilds; as most folks know, the area between settlements, particularly in the rural countryside, was rather dangerous, and Black Dogs amplifies that – nature is, to a degree, where the horrid monstrosities lurk.

As such, we begin this supplement with a very basic breakdown of terrain types, which lists a couple of things for each terrain, comments on customs, religion, church and nobility and also presents a selection of occupations that folks may have. The respective sections have some bullet point-ish “think of”-lists that provide some specific terms. As far as the occupations are concerned, I found myself rather disappointed by them – noting the presence of the guild system and prestige associated would have made it easier to contextualize the respective jobs. Particularly since e.g. tanners generally were ostracized to a degree, while bakers were generally considered to be wealthy and, potentially, sinister. The profession of Black Dogs and their code of conduct is also noted – here, the pdf misses the chance to, you know, actually write down a code for the PCs to swear, instead just paraphrasing the basic tenets – which are, well, basic. Fight evil, protect humanity. Having a proper code to swear would have made for a vastly superior entry here.

The encumbrance system presented works by slots. Most items take one slot, big or heavy ones two slots. Some small items take up 0 slots. Characters can carry Constitution ability score + Strength modifier items. This should refer to SLOTS instead. That’s really basic rules-language, established in the previous paragraph, flaunted. The pdf does come with a basic inventory sheet and mentions over-encumbrance boxes. What are these? No idea. I ASSUME that the 4 entries for light, medium and heavy encumbrance are meant, but honestly, that is me guessing right there. The Medium and Heavy boxes have the header: “Each box slot = 1 + CON or STR modifier.” I have literally no idea how this system is supposed to work. This is particularly galling since LotFP’s encumbrance rules are already rather elegant in their simplicity, but I digress.

The ‘zine then proceeds to present rules for silver weapons, which has doubled costs, suffers a -2 penalty to damage (minimum 1) “in a normal fight” and it breaks on a natural 1. Okay, what is a “normal fight”? I have no idea. However, these weapons inflict double damage versus supernatural targets (and don’t suffer the penalty). I like this idea…but honestly, why would you EVER get anything other than silver-tipped arrows? Why ever go into mêlée? The breaking caveat is pretty damn harsh and irrelevant for ammunition. Oh, wait. Slings have no ammunition listed. So, I assume rocks. Which cost 0, as per the improvised weapon entry. Twice 0 is still 0.

A really, pardon my French, dumb houserule is how distance is handled. Missile weapons can perform a number of shots noted in brackets before an enemy can close to mêlée distance. WUT? So, guy turns up 30 feet away, you get 3 shots. Guy turn up 180 feet away, you get three shots. This makes NO SENSE WHATSOEVER. Kill it with fire. The section otherwise attempts to graft some 5e-ish components on top of the weapon engine. As a whole, I fail to see any improvements coming from the item-houserules presented here.

Similarly strange: Firearms (oddly misnamed as “fire weapons”) misfire on a DAMAGE ROLL of 1. This means that you hit, and THEN, retroactively, realize that you didn’t fire at all. This is dumb. On a rules-language level, we also have the issue that firearms inflict multiple damage dice – a musket, 2d10. So, does it misfire if a single “1” is rolled? I assume that it does not refer to the total, for that is utterly impossible. Once more, the basics of the rules-language are broken and obtuse.

We do get a massive list of mundane items, codified in the slot/cost-system, though, which is a bit of a plus. The pdf then proceeds to provide VERY BASIC Gm advice on when to roll dice and when not, how to fail forward and provide interesting failures. This advice may be interesting for absolute novices, but most folks will be very cognizant of these. This is essentially the starting text of any “GM’s duties/best practices” section ever. That being said, in contrast to the rules above, I actually can see this being useful to some folks.

The ‘zine then proceeds to explain, once more, the tone of the game; I generally don’t expect to all these explanations, but they’re abstract; and in issue #2 of the ‘zine, we’re at a point where I’d say “Show, don’t tell.” Establish a tone by providing the tone, rather than tell the GM that it’s about XYZ – we don’t need to be told this. We get the tone. You only have to read Esoterrorists, LotFP, Pathfinder or the like to understand the tone. It’s pretty much self-evident.

The next section provides a couple of adventure seeds generated with the tables that will show up in issue #3. This, once more, is confused – why not provide the table and sample seeds in the same issue? I really don’t get it. This just hobbles its own usefulness. There also is a rule for morale – roll equal to or under HP left or attempt to surrender. Odd: Humans fighting for the Bishop roll d4 instead. Why not provide concise and more generally applicable rules with variations here? I fail to see the benefit of implementing these moral rules. We close the section with stats for the aforementioned Bishop, regular humans, witches and smart zombies. This section, while less useful than had it been presented in conjunction with the table, represents a saving grace of sorts for the pdf.

Formatting is per se solid, though editing is not on par on either a formal or rules-language level; in fact, the latter is honestly really bad. Layout adheres to a 1-column b/w-standard and the pdf has a couple of stock b/w photographs presented in a really grainy, overexposed b/w that only makes a couple of details clear. These take up quite a few pages. The pdf does not have any bookmarks, which constitutes a major comfort detriment.

Davide Pignedoli’s call for editors in the beginning is well warranted and shows a willingness to improve and consciousness of one big issue this ‘zine’s installment suffers from.

In short, none of the houserules herein are presented in a concise or worthwhile manner. They are all opaque in some shape or form, and beyond the issues in rules-precision, they also suffer from the issue that they come off as change for change’s sake, which is NOT a good thing, even if the rules were perfect. There should be some tangible benefit to the changes made, and I fail to see that for the vast majority of this ‘zine. The final section with the adventure/seed-sketch is okay, but doesn’t really offer anything groundbreaking either. I’m really sorry. I want to like Black Dogs – it’s, premise-wise, a play-style and premise I really enjoy, but the execution of the rules herein is so deeply flawed as to become almost unusable. I hope that the author is not discouraged by this and instead starts to read carefully and closely how rules-language is presented in supplements and then adapts that level of precision in the future. As written, though, my final verdict cannot exceed 1.5 stars, rounded up due to in dubio pro reo.

You can get this ‘zine here on OBS.