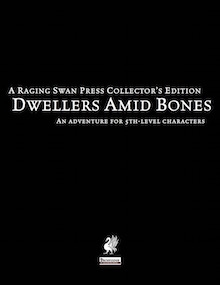 This collector’s edition of Dweller Amid Bones clocks in at 35 pages, 1 page front cover, 2 pages advertisement, 2 pages editorial, 1 page SRD, 1 page ToC, 1 page of advice for reading statblocks, 1 page advice for running the module, 1 page back cover, leaving us with 25 pages of pure content, so let’s take a look, shall we?

This being a collector’s edition of a previously-released, short module, Dweller Amid Bones receives a massive upgrade herein – from the get-go, detailed sample hooks allow DMs to easily kick off the module and then, much like Gibbous Moon, we get an astonishing, massive section of new content – essentially what boils down to a full-blown village backdrop – and in this case, the village would be Arcwood.

Arcwood as a settlement has its origins steeped in conflict – it is the place where the hero Therald Arcmoor fell, commemorating the final battle between the civilized races and the orcs of the severed ear – 300 ft. away from the feared tuskwood. With a majority population of halflings, the settlement obviously comes with a massive array of supplemental information: We receive information on the village’s demographics, whispers and rumors, a settlement statblock, nomenclature and clothing habits as well as local lore and marketplace-information.

As always, the map provided is glorious and represents the privacy the local populace cherishes with the village being relatively dispersed – one can even see where halflings and humans live. The village also provides 3 full-blow statblocks of NPCs one can encounter here. Beyond that, the village, being close to the ancient battlefield, has drawn a less than nice person living in the village, one with a strange agenda. Beyond that, a moaning haunt provides an additional nice piece of dressing.

All right, from the village and the hooks, one can easily send the PCs towards the proper module – which takes place in the cairn devoted to the fallen orcs. Located in the Tuskwood (which also comes with a map), we get an awesome wilderness section, complete with locales, natural hazards and yes, random encounters that provide, among others, sprite swarms. This wilderness trek adds a further dimension to the base module I really enjoy.

All right, still here? Great! As hinted before, Dwellers Amid Bones has the PCs explore an orcish burial cairn to put an end to the various raids conducted by a mated pair of green draconic beings – only forest drakes, thankfully, but deadly nevertheless! The cairn and its details are up to the standard set in Raging Swan modules – general features and details to add to even unkeyed areas make exploring the cairn interesting and atmospheric.

Now from the very beginning, we get a cool twist: Gork Shattershield, undead orcish wight, manifests behind the PCs to demand they purge the drakes (which have time and time again destroyed the stubborn undead orc, only to see him rejuvenate) – thus the adventure begins with an uncommon social interaction before turning ugly – fast!

The drakes lurk in relative proximity and once roused, both attack with their noxious clouds, fight, and when damaged too hard…retreat via speed surge underwater! FANFARE! GLORY TO WHATEVER DEITY OR FORCE MADE CREIGHTON WRITE THIS! Yes, ladies and gentlemen, this is finally one of the scarce, rare instances of draconic foes fighting NOT like complete morons! Hallelujah! Take heed, authors, take heed! Of course, we also get details like wall carvings etc. – but the running battle of the drakes through water-filled maze-like tunnels should pump up the adrenaline for your players – and make the satisfaction of finally confronting the pair in their lair much sweeter! Note: These are drakes. I want to see intelligent dragons in future adventures: With layered magical defenses, terrain used properly, breath weapon cheap shots and traps galore. Oh, and an escape route – dragons fighting inside where they can’t take to air always strikes me as superbly stupid on the reptile’s side. /ramble.

It should also be noted that DMs get a massive array of further adventures and an appendix is downright awesome: The appendix is essentially a glorious DM-cheat-sheet for fighting in water etc., with tables and the like providing handy lists of modifiers that make running the module essentially go-play easy and possible after one casual read-through – kudos!

Creighton Broadhurst and Fabian Fehrs deliver a glorious module here – where the original module sported a truly smart, challenging, detailed mini-dungeon crawl, this collector’s edition takes things one step beyond, providing a massive array of supplemental content that anchors what was before a tactically-interesting module and provides a backdrop that renders the whole presentation more organic and unique. The supplemental content not only diversifies what is there, the sheer level of detail also can add a whole other dimension to the follow-ups; Complications for the module can be easily added via, for example, one less than scrupulous villagers may be a nice potential additional foil for the PCs.

My final verdict for this intelligent module will clock in at 5 stars + seal of approval – an awesome, superior take on a great module!

You can get this awesome module/setting supplement here on OBS and here on d20pfsrd.com’s shop!