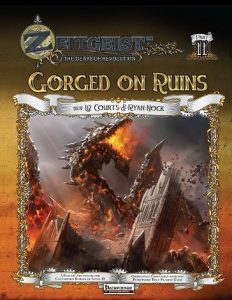 The 11th module of the groundbreaking Zeitgeist AP clocks in at a massive 90 pages, 1 page front cover, 1 page editorial, 1 page ToC, 1 page SRD, 1 page back cover, leaving us with a massive 85 pages of content, so let’s take a look!

This is an adventure-review and as such, it contains SPOILERS. Potential players should definitely jump to the conclusion. You do NOT want to SPOIL this saga for yourself.

All right, only prospective GMs around? Sure? All right! The sun and stars are gone and the dread conspiracy of the Obscurati control the world, with the nation of Risur being the sole bastion against the powers that redefined a world’s very fundamental rules. In the last adventure, Godmind, the PCs not only will have duked it out with creatures far beyond what most APs deliver as final bosses; they also saved Cherage, capital of Danor, from a fate most horrific and undermined the conspiracy’s influence in global politics…and if Danor thus drags its feet, Risur will have at least some time…but ultimately, it is but a matter of time before the nation falls under the combined military force of the obscurati.

Unbeknown to the nations of Ber, Drakr and Crissillyr, there are not in for easy pickings and the calamities that befell Danor would only be heralds of the dread things to come. Now here, the module branches a bit in playstyles: If you want to go full-blown Justice League, swooping in via an airship will have you covered – and yes, including travel distances handily collected in a table. If you prefer (more likely, imho) more deliberate planning and smarter moves as a modus operandi after a whole campaign of intrigue and espionage, then the module supports that playstyle as well.

I was talking about apocalyptic calamities, right? Well, turns out breaking the Axis Seal did open the world to interlopers: The dread Gidim have taken root within the nation of ber, feeding on the psychic forces of the populace; via infiltration and invisible eye-like oculi patrolling the streets – the PCs are contacted by the executores dola liberta, an elite cadre of Berian lawkeeping women – which will bring them, quite probably, to Berian Ursaliña – a land, whose ruler Bruce Shantus may well have been saved by the adventurers in module #6. Glaucia, a gnoll and one of the executores, has detected that something is amiss and offers an alliance if the PCs look into the whole matter – and as they discuss matters, the first assassination attempt is sprung, as high-level Ob killers attack-

A timeline for the Ursaliña-investigation is provided and the PCs better don’t drag their feet, as the gidim ‘s cerebreal mesh is draining the spirits of the locals, slowly building towards a massive cataclysm for the country and perhaps even the world – think of the whole investigation here, with numerous social scenes, as a combination of “reap what you have sown” meeting a dystopian, spirit-draining surveillance state engendered by a grey eminence. The strangely apathetic and sad populace, the requirement for high-level tricks to avoid get past the forces of the gidim – the whole section has a very unique flavor I haven’t seen done before in PFRPG, where high-level modules tend to become either sandboxes, epic crawls or combinations thereof due to the system-inherent limitations. While the section cannot possibly account for all player capabilities at this level, it does a neat job – and yes, dealing with gidim bases and meeting up with old aquaintances who may have switched sides in the Obscurati’s new world render this section a rewarding experience indeed.

Ultimately, though, the PCs will have to find the massive gidim leviathan hidden in the nation – a collossal ship of flesh and steel – think of it as a disturbing, quasi-cthulhoid *THING*. Now, obviously it will take off and attack and ship-to-ship combat is a very real chance…unfortunately using teh rather bad naval combat rules employed by the AP – I’d strongly suggest using Frog God Games’ Fire as She Bears instead…or go for the imho more interesting route: You see, the authors seem to have understood that not everyone enjoys the rules employed and thus, the interior of the leviathan is actually mapped like a living dungeon. So yes, infiltrating the thing, an appropriately epic undertaking, may thwart the imminent feeding of the gidim homeworld…provided the PCs can prevail against the powerful gidim commander.

So that would be the first threat of apocalpytic proportions. Well, guess what? Drakr has seen better days as well: Grandis Komanov’s army of doomsday eschatologists besiege Bhad Ryzhavdut, bolstered by not 4, but 5 legendary riders, this world’s 4-horsemen analogue if you will, to reclaim the eye of the dread fey titan Voice of Rot. Oh, and the riders? Well, they’re now undead titans. Granted, one may well betry the others out of spite…but still. The issue is not simply stopping the exceedingly powerful messiah of the end-times…it is about stopping the very *idea* that has infected the minds of eschatologists – and so, while confrontation, warfare and the like may well be possible takes on the issue, actually managing to destroy the eschatologist hivemind, their endzeitgeist, if you will (that was weird to write!) may be the smartest and most prudent thing to do.

This is not the end, stopping an army of doomsday cultists is not the high point of this module – Morgan Cippiano asks for assistance on behalf of the ecclesiastical monarchy Crisillyir: The sacrament of apotheosis, which may have been in the hands of the dread eschatologist mastermind, but it most definitely has found its way into the hands of former Godhand Vitus Sigismund – and he is holding public trials for the deities of the world, sentencing them to death for their crimes…and actually KILLS THE GODS. Every two days, a god falls – and with the deity, a lot of the followers fall as well. Stakes high enough for you? Once again, there are quite a few means to handle Vitus Sigismund and actually find the ritual of the axis seal, which may be the only hope for the world…but how to go about everything? Consulting with the powerful Dons, the PCs will have to establish a strategy and while multiple courses of actions are possible, the most rewarding would pertain the journal of Triegenes, held within the dread Crypta Hereticarum – so there is a good chance that this is where the PCs will go. Oh, have I mentioned that the heavenly host, bound by powerful vows, is actually on the side of Vitus? Arrival at the tainted place may not only allow the PCs to reconnect with a powerful demon, Ashima-Shimtu, and free her…it also well may pit the PCs against a whole host of angels, as the breaking of the Axis Seal brings millennia of prayers down upon the place to eradicate everything inside…including, potentially, the journal they need to save the deities. Oh, and even if the PCs succeed here, they still have to actually win the trial – for, like before, the true fight is not about slaying foes, it’s about establishing the supremacy of ideas over one another. Unfortunately, Vitus does not take kindly to being defeated…and conjures forth a nice little 300-feet lava dragon. Oh, and the PCs don’t have the power of Risur’s rulership to back them up…but they do have an airship and hopefully the avatar of Triegenes…but still: Cr 25, if you’re interested…the thing is a genocide machine and defeating it will take serious creativity…oh, and aforementioned demon…she may make for an alternate boss as well.

The pdf comes with several handouts – news, a primer on the horrible defensive situation of Risur, maps and letters – the supplemental material is, as we’ve come to expect, of high quality.

Editing and formatting are top-notch, no complaints in that department. Layout adheres to EN Publishing’s two-column full-color standard and the module comes fully bookmarked for your convenience with nested bookmarks. The artworks range from awesome to solid and generally are full-color with few b/w-stock images thrown in. The pdf is layered and lets you eliminate the graphics on the borders etc. to make it less draining on the printer – kudos!

Liz Courts and Ryan Nock deliver basically 3 evocative campaign-ender modules in one; each of the chapters in this book features the epic depths and stakes one usually only sees in a campaign finisher…and there are 2 modules to come beyond this one! While Zeitgeist has always cheated a bit with the rules and precise modifications of how specific components work, with the breaking of the axis seal and the unfettering of magics, that has gone…and the module embraces the issues of high-level adventuring in a smart way: Instead of focusing on slogs, whittling down PCs in drawn-out battles and grinding everything down to a crawl, the book and the AP’s focus on ideologies and ROLEplaying, the means to influence whole nations and ideologies, makes this module stand out. The minor weaknesses of the AP can still be found – when I see a DC 15 check at these levels, I shake my head and there are some minor deviations in the implicit conventions of what type of check a certain action would require to resist. This does take a massive backseat, though; this module’s selling point (and that holds true for the whole AP, as far as I’m concerned) were not the mechanics.

It was always the story that dares to demand smart and engaged players and GMs, that dares to weave a yarn beyond the old structures, that focuses on roleplaying and consequences, on free will and the interactions of unique ideologies. In contrast to the old “then the world is doomed” scenarios, here, the stakes *REALLY* feel high; bereft of the tools that helped them defeat the forces of the fey titans, the PCs this time around are reduced to their wits and considerable, demigod-like powers – and not to slay another demon lord, prevent another meteor…this time, nations and all its inhabitants are at stake; people the PCs know…and their deaths would not even be the damn point of the whole thing! The world turns towards annihilation and it is up to the PCs to try to halt its inexorable spin towards calamity.

Don’t get me wrong, there is plenty of opportunity for the PCs to flex their level 19 muscles against foes that are actually worth going up against – but the true achievement of this module is to one up the threats faced in the installment #10: There is, at least for the thinking woman/man (which I assume your group belongs to if this module interests you) more satisfaction in the awesome roleplaying this requires; there is simply more at stake than just fighting titanic beings – this module depicts the war on the very souls and minds of a world. How much more epic can you get? We’ll see. Two modules to go.

Is this perfect? No. But it is one absolutely superb module and at this level-range, the only other module I’d consider on par with it, but with a completely different focus, would be the legendary Colliseum Morpheuon, which handles the challenges of highest level gameplay in a radically different way. In short: This is an excellent high level module that transcends in scope and stakes just about every module I know. 5 stars + seal of approval; this further fortifies Zeitgeist’s status as the premium ROLEplayer’s AP and with only 2 modules left to drop the ball, it is already a monument to smart storytelling.

You can get this inspired module here on OBS!

Do you prefer 4th edition? You can get that version here on OBS!