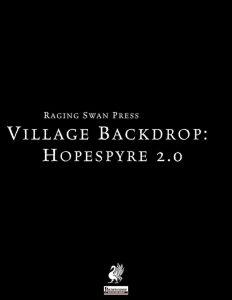 The expanded 2.0-version of the supplement depicting the village of Hopespyre is 13 pages long, 1 page front cover, 2 pages of advertisement, 1 page editorial/ToC, 1 page SRD and 1 page back cover, leaving us with 7 pages of content, so let’s take a look at the settlement!

The expanded edition of Hopespyre includes plenty of the things we have come to expect from the series: We get information on local lore, notes on the appearances and dressing habits of villagers, flavor-centric write-ups of key NPCs, some rumors to unearth, etc. The write-up for the village does not include settlement stat modifiers, but it very much does feature a proper general marketplace section – kudos for the latter, boo for the former – particularly since the first iteration of the village did provide proper settlement modifiers!

When I read “Hopespyre”, my first association was that of a rural, gothic place, of dark fantasy – a religious tyrant burning unbelievers (or those in his path) at the stake; I thought about a place of oppression. Pretty much the obvious is the case. Hopespyre was founded by a visionary half-orc blessed by the flame as a refuge from the sins of his former life and now represents an enclave of per se nice people, who are still considered heretics by the vast majority of outside forces. Still, the Church of the Redemptive Flame seems to be benevolent, claiming that the eternally blazing pyre in the middle of the place actually burns away past sins. Speaking of which: The Pyre is actually mechanically relevant and the revised edition does come with 6 sample events for this place – kudos! It should also be noted that the marketplace section has been split and expanded, with Makers’ Hall offering their own list of items for sale – like that!

Interesting: Hopespyre is not fixed in a specific environment – instead, the supplement presents advice on how to make it work in forests, hills, islands, etc. This is a good idea, but the implementation is somewhat ineffective: No GM needs it spelled out that some low hills conceal the village; having some terrain-specific hooks here instead would have been a wiser use of wordcount imo.

The dressing table has been expanded for the 2.0-version, now sporting a total of 20 entries for dressing and events, which I most assuredly appreciated. The addition of notes on local customs and traditions also was nice to see. Somewhat weird: I do not understand why the perfectly feasible statblock for one of the NPCs in the original iteration has been cut here.

Jacob W. Michaels is a damn talented author and this pdf pretty much showcases some of his talents – by being as versatile as this pdf is, the village of Hopespyre actually constitutes a fun, unique place that utilizes themes and motives in a rather complex, interesting way – and yes, this settlement can actually end in heart-rending tragedy, allowing you to explore quite a few themes not many supplements explore. Hopespyre is a crown-jewel in the series – and yet, I can’t help but be somewhat puzzled by the PF1-version’s update actually getting rid of some perfectly serviceable content. While I very much like and appreciate what has been added here, I don’t really get why the supplement was thus changed and deprived of content that existed previously. As a consequence, I wouldn’t really recommend this supplement to anyone already having Hopespyre; if you don’t, then consider this to be a 5 stars + seal of approval file; for the purpose of its function as an expansion/update only, I’d consider this to be 3 stars; as a result, my final verdict for this version will clock in at 4.5 stars, rounded down.