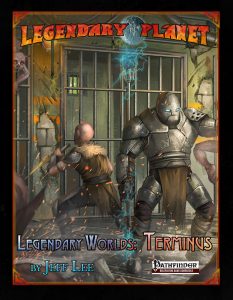 This installment of the Legendary Worlds-series clocks in at 18 pages, 1 page front cover, 1 page inside of front cover, 2 pages of SRD, 1 page editorial, 1 page ToC, 2 pages of introduction, 1 page advertisement, 1 page back cover, leaving us with 8 pages of content, so let’s take a look!

A small, dark planetoid orbits a dying star, its surface barren and lifeless, its gravity low; a mere 3640 miles in circumference, the planetoid’s red sun casts a bloody light atop it; on the southernmost point of this desolation, there is one square building, and past its airlock gates, there is but an adamantine trapdoor, leading below, guarded. Anyone is allowed in. None are allowed to leave.

This is Terminus, the Pit of Despair, and it is considered to be the worst prison in the galaxy. Not quality-wise, mind you, but regarding its conditions for the inmates? Oh boy. Terminus is ruled by the mysterious Overseers, and once you got down inside the spiral ramp – down there, you learn of nightglass, which is mined here…and which you can exchange for food and water.  With a laissez-faire approach as long as the nightglass is rolling out this place, it comes as no surprise that clans have formed, making the place a de facto rule of gangs…but things get worse. Something in Terminus taints those that live here: Humans are progressively corrupted into becoming morlocks, dwarves slowly turn derro, and the changes may be slow, but they do affect the offspring of prisoners. It should come as no surprise that the dead have a higher chance to rise as undead as well. On the more interesting side, this strange effect does allow races usually incapable of crossbreeding to do so.

The supplement gives us a brief survey of the 3 most dominant of Terminus’ clans: The All-Folk are chiefly mongrelfolk, result of Terminus’ strange prevalence of chimaerism; the Gloried are essentially human supremacist racists that eat their own dead, including a murky and ill-defined pseudo-religion, and finally, there are the Ironmongers, a group of fatalistic individuals hell-bent on destroying the wardens, making weapon and armor from their remains, The wardens, btw., would be a new type of creature, a CR 8 robot construct that comes with a pretty amazing artwork. They have a calming aura and a stun staff, making even one of them a pretty formidable foe. Neat build! From the slain wardens, the Ironmongers have found away to modify the staves of the wardens to instead generate deadly electric charges, and their makeshift armor from warden plates does fortify to a degree against Blackfire.

The interior of Terminus also knows the phenomenon of Blackfire: Nightglass generates a shock that causes ability score damage to those casting spells or using magic “nearby”; objects are instead subjected to untyped damage. I like this hazard, but wished it specified a precise range for the effect.  Those slain by Blackfire may return as a Blackfire Wight – a CR 6 creature cackling with the energy, its touches laced with it, capable of firing it as blasts, etc. – once more, we get a full-color artwork, and these undead can absorb magic… Of course, a bomb-version of nightglass for offensive use, the magebane bomb, is included as well: I liked it, as it reminded me of the Dimeritium bombs of a certain White Wolf.

But why nightglass? Well, one of its uses is the brewing of an elixir called Stygia, a potent drug that grants serious Spell Resistance and immunity to blackfire…but, well, it’s a drug! And yes, it’s properly stated and highly addictive….another control mechanism.

The final half page contains a selection of 3 different adventure hooks: Escape, infiltration and survival – the three general concepts you’d escape from the planet’s concept.

Editing and formatting re very good on a formal and rules-language level. Layout adheres to the two-column full-color standard of Legendary Planet-supplements, and the pdf comes with several really cool full-color artworks. The pdf comes fully bookmarked for your convenience.

Jeff Lee’s Terminus is a neat hellhole in the vein of Riddick, the Gothic videogame, etc. –we get a well-crafted prison-world here, with mysterious wardens that are thankfully NOT overexplained, with well-crafted builds and some cool effects. While I do maintain that that the Blackfire effect should have a range, and while the set-up seems tailor-made for a custom corruption, I nonetheless consider this to be a well-crafted installment of the series. My final verdict will be 4.5 stars, rounded down.

You can get this hellish prison here on OBS!

While my review is based on the PFRPG-version, the supplement does exist in two additional versions:

The SFRPG-version can be found here!