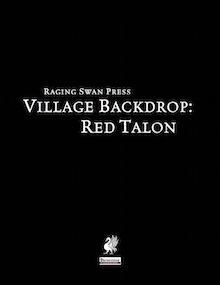 Red Talon is not a subtle village. Nestled in a sheltered cove that is separated from main-land entrance by massive cliffs, it could be pretty much a paradise. Let’s get that out of the way if the name was not ample clue: It’s not. Founded by a bloodthirsty orc captain listening to the colorful moniker of Hagruk Stormrider, the village still sports a lot of orcs and half-orcs and would be a pretty deplorable pirate’s nest, had the life of Haagruk went a conventional career in pillaging and plundering. Alas, during his exploits, he and his crew took to the worship of the cannibalistic Ukre’kon’ala, engaging in acts most depraved.

And, as often, the most vile of beings do not rest easy in death’s embrace – while his Red Talon, his ship and the inspiration for the settlement’s name, has sunk years ago and while he and his crew perished, he yet remains – transformed into a terrible undead and leading his cult from the shadows, the village has since then provided a steady supply of the nourishment the now undead villains crave.

As always in the series, we not only receive a nice piece of cartography detailing the settlement, we also receive ample information of clothes worn, names, customs, a market place etc. The dread Hagruk gets full stats and the vile deity also receives a short write-up, though you should not expect any surprises here – it’s pretty much a generic “Mad eat-em-all-deity”…and a missed chance. The pdf does sport rumors and events alongside settlements statblock and information on the village’s “law and order” – yeah, right.

Richard Green paints in vivid strokes a rather nasty pirate village of the worst kind, the kind of place that makes Freeport or Port Shaw look cosmopolitan or welcoming. As such, Red Talon is a nice way-station for adventurers, a powder-kegs ready to explode in face of the fire that the PCs represent. At the same time, however, I felt honestly not that blown away here – the set-up in itself is certainly not novel, but the execution also falls a bit behind. So we get *yet another* pirate-y environment with an evil cannibal cult? Not sure how many of those I’ve been, but there are quite a few out there – and with the brevity of the format, not much can be done to push the boundaries or develop a unique take on the trope. That would be gripe #1. Beyond that, I also feel like this supplement has somewhat failed its own potential – with Hagruk’s treasure to be found out there and adventurers being lured in, this village could have worked well as a true trap, a cunning set-up, perhaps even one with a brimming pseudo-treasure-hunters industry. Instead, the pdf opts for a more conservative take, which, while not bad in any way, shape or form, imho renders the place somewhat less compelling than it could have been. My final verdict will hence clock in at 4 stars.

You can get this nice village backdrop here on OBS and here on d20pfsrd.com’s shop!
Endzeitgeist out.