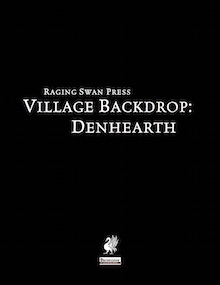 Situated high atop the mountains on an isolated plateau, Denhearth has suffered long from the vile predations of the powerful red dragon nick-named Cinderblaze – until the vile creature was slain by the benevolent gold dragon Galiantana – under her auspices, the village prospered and even saw the creation of a fabled academy, established to guide those that have the sorceror’s gifts towards a wholesome and controlled application of their draconic gifts.

But, alas, all golden ages (Get it? … -.-…sorry, will put a buck in the bad pun jar later) must end eventually and noble Galiantana has not been seen in quite a while. Some rumor her to be dead, while others only fear her to be missing; in any case, Denhearth, with its academy, seems rife for the picking by the forces of darkness once again. Now, as always, the village comes with copious information on both local color (like nomenclature, clothing habits and the like), lore to be unearthed via the respective skills, rumors and events as well as magic for sale; and yes, the rumors, questioning e.g. the parentage of dragon-blooded locals and similar interesting hooks provide a neat and uncommon, yet sensible angle to the village’s plot-options – which include btw. options to develop Galiantana’s absence in various ways.

Unlike most recent installments of the series, this time around we get two damn cool sample statblocks, the first of which would be a CR 8 sorceror/dragon disciple, while the second would be a half-dragon chupacabra – yes, you read right. Oh, and the fellow is one of the anti-theft security measure of the local shop, which deserves its name “The Hoard.”

Jacob W. Michaels’ Denhearth is a thoroughly compelling settlement – with a unique angle, capable NPCs and a surprising emphasis on kind characters as a beacon of light, the place not only will be useful for the PCs, it’ll be a place they WANT to keep safe – which ties in perfectly with the numerous options and narrative directions a GM can take the village. Considering all of that, the uncommon locale and cool premise, we have a prime candidate for a final verdict of 5 stars + seal of approval.

You can get this inspired settlement here on OBS and here on d20pfsrd.com’s shop!

You can support/subscribe to Raging Swan Press-releases here on RSP’s patreon!
Endzeitgeist out.