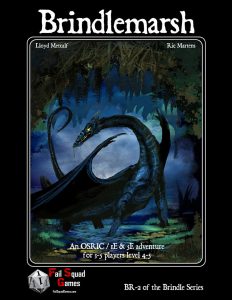 The second adventure in the Brindle-series clocks in at 39 pages, 1 page front cover, 1 page editorial, 1 page advertisement, leaving us with 36 pages of content, so let’s take a look!

So, first things first: This, unlike the previous module in the series, is a dual-system adventure, with stats and rules intended for both OSR and 5e-games; the OSR-rules employed are OSRIC, in case you were wondering. The module is intended for 3-5 character of 4th to 5th level, and it is an old-school module: You can’t just hack and slash through it and hope you’ll live to tell the tale. This does require some smarts, and the group’s survival rate will increase drastically if the majority are capable of operating with stealth and subterfuge. Having a thief/rogue on hand is highly recommended.

Now, if you recall the first module in the series, “The Bogey of Brindle”, you’ll be surprised to see both systems mashed into one book; personally, I am not a big fan of this approach, as dual-stat books by definition make you pay for some content you won’t be using, and you have to account for the peculiarities of both systems: If e.g. system A nets flight at 3rd level, system B at 6th level, you have to account for flight in one system, but not in the other. In short: Writing a module as dual statted tends to introduce a lot of instances where rules or logic might fail. Dual stat books also require that the reviewer rates the entirety: If one system works super well, but the other one doesn’t, this would result in two ratings for dedicated versions – one good, and one not so good. For dual-stat offerings, one is forced to instead rate the book as a whole. “The Bogey of Brindle” has been my favorite Fail Squad Games adventure, so here’s to hoping this book can expand on that – but can it improve on the botched 5e-version of its predecessor?

Well, before we go into the nit and grit, it should be noted that the module comes with read-aloud text, and that it does not require having completed “The Bogey of Brindle”, though doing so is helpful. You see, there was this gate in the dwarven mine taken over by kobolds – it’s time to go through this gate. The pdf provides, in brevity, the scene from part 1; this gate is btw. also easily inserted into pretty much any dungeon context, so integration of the module is swift and painless. The module takes place entirely in a dungeon complex, and random encounter tables are provided for the respective sections of the complex.

Okay, and this out of the way, we have to go into SPOILER-territory to further discuss this. Potential players should skip ahead to the conclusion.

All right, only GMs around? Great! So, the lore surrounding the kobolds and area around Brindle noted that, at one point, the dwarves that lived here vanished. Well, we find out what happened to them. Basically, they were beaten. Their conflict with black dragons escalated, and they led an attack on the survivor (whose lone egg the kobolds found…), but were, ultimately, soundly trounced by the enraged, magic-imbued apex predator finding his family slain. Opting for a more exquisite punishment, the dragon Nagareth the Poisoned managed to transform the dwarves into servitor-creatures, the grotesque drillo, and has been displaying the mighty regalia of the dwarves ever since. While the way by which this whole conflict took place is a bit opaque, as is the drillo transformation, those aspects are ultimately not that important.

The idea of the module is pretty simple: A frontal assault on an alarmed complex would be suicide at this character level, but with the magical axe unearthed, the PCs essentially enter the complex by means of a gate that had been dormant for ages, which makes for a good reason why the dragon never demolished it. The dragon has no reason to suspect intruders, and the PCs have very good reasons to make sure it stays that way as they explore. While no shifts, patrols or the like are provided, a capable GM should be able to evoke a sense of threat throughout. Interesting here: The PCs arrive not that far from the dragon, and the dungeon exploration, in many ways, is treated more like a stealthy, lite-investigation than a kill-all romp. You see, there is a tribe of troglodytes that can make for unconventional allies, as they really don’t like being enslaved by the dragon. Their stench also is a good reason why nobody bothers to keep a closer eye on them.

From the sub-level of the dungeon sporting giant ants to small tidbits and terrain (the troglodyte caverns are color-coded on the map), the module manages to evoke a sense of cohesion and plausibility – the dragon is deservedly arrogant, and its behavior makes sense in-game. Smart players may also unearth a means to undo the curse of the drillo and revert them to their dwarven state – particularly the dwarven hero Grimfolk Dain would be more than helpful…and that is highly recommended, for the goal is, ultimately, to take down the dragon. If the PCs fail to take care of the drillo, they will have to face both Nargareth and his servitors – suffice to say, that is not a smart choice.

So yeah, this is a potentially very deadly adventure that, while not perfect, runs surprisingly well and is a fun, exciting romp. Formatting tends to be relatively consistent, and though there are instances where spells and the like have not been properly formatted, and while magic items consistently flaunt OSRIC’s conventions, the module works for the most part. There are a few inconsistencies, such as when the pdf mentions physical attacks being repelled, but doesn’t state whether that’s supposed to mean negation, or that the assailant takes the damage instead.

As far as 5e is concerned, the same cannot be claimed. If I ever felt dread at a module’s starting passage, the following paragraph exemplifies it perfectly:

“Some creatures and challenges don’t always convert seamlessly to 5E from OSRIC / 1E, so a GM should use discretion while running the game, i.e., 2 zombies facing a party of 4 first level characters in OSRIC / 1E may not be the same challenge as 2 zombies facing the same characters in 5E because of various abilities, powers, and effects. We have done our best to take these into consideration during conversion, but the details may need some adjustment to adapt to your game, homebrew rules, and character play style across editions. The entries and descriptions in context are apparent if they are intended to be a serious challenge or simply cannon fodder for the PCs.”

No. Just NO. This is what we buy modules for. That’s what a proper conversion, particularly to a more rules-heavy system, DOES. It adjusts a module or supplement, and tweaks the challenge and rules to conform to the playstyles of the target system. This did not bode well, and is frankly an insulting notion. I had a sentence by sentence vitriolic disassembly of the statement above at one point in the review, but I elected to delete it in favor of something more constructive. Suffice to say, this really riled me up. If you can’t be bothered to make your module work in the target game system, THEN DON’T DO IT AT ALL and write material for a game you CAN be bothered with doing right.

In the spirit of trying to be constructive, formatting is better than what I’ve seen in previous Fail Squad Games attempts at 5e. For the most part, the statblocks, items, etc. are formatted correctly, though e.g. Skills are often listed incorrectly.

Those are the basics that denote a bad conversion. The module goes further, though! Beyond that, it fails to ever codify the drillo transformation properly in rules; it also seems to lack understanding regarding how dangerous a frickin’ challenge 14 dragon is in 5e. While it is not utterly impossible to take the fellow down, the weaksauce allies won’t help half as much as in OSRIC, where numbers tend to mean more than in 5e. And don’t start with accounting for long/short rests or some of the intricacies of 5e, or its rules language. This module does not work properly in 5e, and is an at best sloppy, at worst insulting conversion.

Editing and formatting are okay on a formal level; on rules-language level, they are okay for OSRIC, abysmal for 5e. Layout adheres to a two-column b/w-standard with neat, original b/w-artworks. Cartography is full-color and functional, but not particularly detailed or captivating. There are no player-friendly maps included. The pdf has no bookmarks, which is a seriously unacceptable comfort-detriment. I can’t comment on the print-version, since I do not own it.

Lloyd Metcalf’s second part of the Brindle-trilogy deserved better; while the OSRIC-version is a fun experience that would have benefited from a slightly closer eye towards the formal criteria, it is an adventure I could recommend as an enjoyable, nice old-school romp, somewhere in the 3.5 -3-star vicinity.

Unfortunately, I can’t rate it as such, because the 5e-conversion by Ric Martens and H.M. Sims is atrociously bad. While at least rudimentarily functional in theory, this version will not survive any contact with tables, unless accompanied by copious GM-calls to make up for the bad job done here. I wager most experienced 5e-GMs who actually bothered to learn how the system works could do a better job. This version would deserve, at best, a 1.5-stars-rating.

It is much to my chagrin, then, that I have to rate these two iterations as one composite entity, because one deserved better, and the other deserved worse. Averaging out, we thus arrive at a final verdict of 2.5 stars. Usually, I’d round up in favor of the OSRIC-version and my in dubio pro reo policy, but from lack of bookmarks, to no player-friendly maps, to the INSULTING 5e-version, I just can’t bring myself to doing so. 2.5 stars, rounded down. This adventure deserved better.

You can get this adventure here in pdf on OBS!

The print version can be found here!