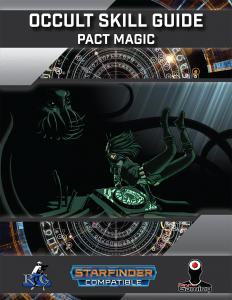 This installment of the Occult Skill Guide-series clocks in at 39 pages, 1 page front cover, 1 page editorial, 2 pages of SRD, leaving us with 35 pages of content, so let’s take a look!

So, pact magic! Finally! As you all know, I am a huge fan of pact magic – the Grimoire of Lost Souls for PFRPG is one of my favorite crunch-books for the system, and I’ve been a fan of it since the 3.X days of yore – so is this just another conversion of PFRPG material to SFRPG?

The answer, thankfully, is a resounding “No!” It is my pleasure to announce that this is not the case! Instead of grafting a new subsystem onto Starfinder here, the book elects to use the very elegant Ritual-engine already employed by the Occult Skill Guide series as a basis, which is a rather interesting angle. I assume that you’re by now familiar with the ritual engine, as I’ve explained it in my previous reviews of the series.

So, the ritual that’s the base of the system here would be spirit binding, which is a level 1 necromancy [pact magic] ritual that has a casting time of 10 minutes and requires that the ritualist has researched the spirit’s ceremony and seal as the Characteristics-component; as a Focus, a twelve-faceted crystal is required, and reagents are stick of chalk and any reagents demanded by the spirit; if you wish to get the spirit’s vestigial companion, you must provide a sacrifice as well, one that corresponds to the spirit’s allies or enemies, as noted by the spirit. The ritual may target the ritualist, or a helpless or willing creature, and the duration is 24 hours or 1d2 days; Will negates and SR applies. On a failure, we have a disadvantageous pact. Additionally, you roll 1d20: On a 5 or less, you gain a pact malady of the GM’s choice. The ritual does come with notes on adventure ideas/hooks, and then proceeds to explain spirits.

You can have two types of pact with a spirit: An advantageous pact is what you’re trying to get – it lasts 24 hours, nets you control over the spirit’s gifts, and lets you accept 1 Influence Point to roll twice on a d20 and take the better result. You can also hide the sign while you’re not using the spirits power as a move action, if you want to; on a disadvantageous pact, the binder (the term for the one using spirit binding) is subjected to more of the whims of the spirit; binder level is set to a level, duration is 1d12 days, all gifts must be accepted, and you gain an Influence Point sans benefits and must always show the spirit’s sign. Binder Level is interesting: This is a level denoting the power of the gifts you gain from a spirit: As noted, you can choose this if you make an advantageous pact, but if you make a disadvantageous pact, the spirit gets to choose them! Binder level must be at least 1, and cannot exceed your total level.

Gifts generally fall into 4 categories: Apotheosis is a kind of transformation of the binder, often acting as a polymorph. Major Gifts represent serious power – once you’ve used one of those, you can’t use any other major gifts for 1d4 rounds. Minor Gifts may be used more freely – some require the expenditure of Resolve Points, others don’t. Vestigial Companions make a companion creature out of a sacrifice, and you may only have one of those at a given time.

Each spirit has its own ceremony and backlash, and most belong to one of 12 constellations: Angel, beast, dragon, fiend, hero, mage, noble, scholar, seer, skull, tree. There are also spirits that are unaligned – the starless spirits.

A spirit has 3 components: Ceremony, gift and rites – all may be discovered via a Mysticism check versus DC 15 + 1.5 times the ritual’s level, equal to the spirit’s level, each of which requires 8 days of study per level of the spirit. The pdf provides concise rules for discovering spirits beyond roleplaying.

Spirits offer supernatural abilities, and for each one you accept, you must accept 1 Influence Point OR lose a replacement class feature, which is yet another aspect where the system makes great use of SFRPG’s rules-chassis, and it precisely states how this works with e.g. archetypes, etc.. This choice is obviously not up to you if you have a disadvantageous pact, though.

If you want to get rid of a spirit, you can do so as a full action, trying to expel it, but failing to do so will net the spirit a LOT of Influence Points, and you can only try to do so once per day. Alternatively, you can try to get rid of the spirit with the exorcism spell.

Amazing: The Spirits come with artworks, organized in a circle – blue lines denoting allies, red lines denoting enemies. If the one-glance-you-get-it artwork/diagram is not your cup of tea, each constellation also lists the appropriate allies and enemy. If a spirit considers a binder an ally, they may reroll one check during the binding ritual; if the spirit considers the binder an enemy, the binder has to roll ALL checks twice and take the worse result. Totems, certain requirements you can fulfill, increase your chances to bind a spirit – each totem nets a +1 bonus to all checks made to make a pact with a spirit.

Okay, so what spirits are covered here? Well, we have, for example, Aza Azati, the Green Wyrmling, as a level 1 spirit. Aza Azati offers one major  gift, acid gout, which nets you a scaling breath weapon of acid; 5 minor gifts are available: Acid Belch lets you have a decoupler pistol-like ranged attack; if you’re proficient with longarms, you instead get decoupler rifle-likeabilities – and scaling is handled via item level/character level. You can also get draconic senses, woodland stride,, the ability to sniff out gold, and scaling at-will shrink. The apotheosis nets you scaling DR, swim speed and a bonus to saves vs. paralysis and sleep, and you can be permanently shrunk if you have that. As a vestigial companion, we get the pocket wyrmling.

Second would be Coralene, Sovereign of Silver, who lets you sense your mark up to 1 mile away, and nets you bonuses regarding subterfuge, etc.; the major gift here lets you step into the Byways for short-range teleports/skirmishing – awesome. The cat burglar companion is also cool, netting you a common house cat capable of perfect hand-manipulation. I love this one!

Speaking of love: Kevix the Quick, the skittish skittermander – his legend is amazing and struck a chord with me: It is written as a bed-time story/morality tale for skittermander-kids; you see, Kevix was special – he never slept, he constantly busied himself, all while the rest of his culture, oddly, seemed to be lazy! Seeing this frantic activity, Kevix’ parents drugged the little skittermander, rendering him tired and able to sleep – but when a threat came, it was Kevix speed and hyperactivity that saved the day. This is genuinely heart-warming. Oh, and apotheosis? It nest you skitterarms, of, if you already have 6 arms, you gain a bonus feat. The spirit lets you temporarily phase out of reality. Ever helpful with better aid another, and a means to use Resolve for extra move actions, this spirit is powerful and INCREDIBLY charming. As far as I’m concerned, this fellow warrants getting this pdf all on his own. Oh, and as always: Skittermanders should be CORE!

Rextavious Zul is also pretty epic: As a Focus, you need 243 wargaming miniatures that depict a historically accurate pre Nova Age vesk army, with paint-job; for the spirit is that of those vesk tasked by their glorious deity to conquer the stars and bring order –even at the cost of their free will. Great take on the conqueror, with suitable combat abilities and the ability to call soldiers. Oh, and you can make living weapons.

Tommy Greenspout, the immortal rapscallion, is also damn cool: Knock twice on an object and get a secret base extradimensional space? Really cool when coupled with the aging rules: The fellow can also temporarily make targets a Child. Another mechanically distinct and flavorful one here. Yith’anu the Body-Snatched gets mind switching and wiping tricks, as well as some kyubi points – the entity is a kind of blend of yithian and kitsune tropes. Neat!

The pdf concludes with the rules to design your own rituals.

Editing and formatting are very good, I noticed no serious hiccups on a rules-language or formal level. Layout adheres to the series’ elegant two-column full-color standard, and the pdf comes with plenty of full-color artworks and cool sigils for the spirits. The pdf comes fully bookmarked for your convenience.

Alexander Augunas does it again, the nigh impossible, as far as I’m concerned. He has crafted a pact magic engine that not only seamlessly integrates into his phenomenal ritual engine, it also feels distinctly SFRPG in all of its rules and way it handles the game; this is no conversion, this is its own beast – and frankly, I LOVE that pact magic is no longer class-bound. In my homegame, I champion a similar approach, and this delivers – as they say in my group: Pact Magic is for everyone! This is imho the best rules-chassis for pact magic that we ever had. I adore it to bits, and I so want more. 5 stars + seal of approval, and this is a candidate for my Top Ten of 2020 – can we please get more?

You can get this awesome, distinctly SFRPG take on pact magic here on OBS!

This book is part of the Occult Skill Guide-series – and there is currently a MASSIVE hardcover being kickstarted! This book needs to happen, and it only has around 40 hours to fund! If you love this series as much as I do, please take a look at the kickstarter here!

Alexander Augunas is also working on his own RPG, Eversaga, and what I’ve seen so far looks fantastic. You can support Eversaga here!

If you’re enjoying my reviews, please consider leaving a donation, or joining my patreon. Every bit helps. Thank you.