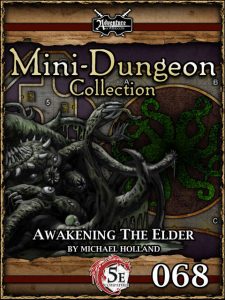 The temple of Treania, goddess of waters, and her 4 divine children, has been raided by a madman and his cultists, attempting to call forth a kraken, who ostensibly should consume the temple’s essence to become a god. Here, we have a problem with the premise: For one, it’s pretty easy to slot a sea-goddess into the campaign – but her AND 4 divine offspring? That’ll require some justification. Furthermore, in pretty much all campaigns I know, divine ascendance is more difficult than just defiling a temple. Now, in contrast to PFRPG, the creature actually has tentacles this time around, so that’s a plus. Still, this’ll take more effort to slot into the game than usual. A significant part of the complex is wading through ruins of a religion you’ll probably not use again, so yeah, that aspect’s not so cool.

The main draw of this module, ultimately, is stumbling into the ritual, where mad cultists are being squashed as the elder deep one is called. Here is a bit of an issue: The idea here is awesome: Defeat the cultists, while tentacles flail around. Neat, right? And indeed, the 5e-version works MUCH better, opting to use the tentacle of the kraken as a discorporate hazard of sorts. Monster-wise, we get 3 different deep one statblocks taken from Kobold Press’ Tome of Beasts as a supplement for the kraken. The BBEG is not such a wimp as a consequence, which significantly improves the module.

The PFRPG-version of this module had SERIOUS logic-bugs and the final encounter was choppy at best; Chris Harris’ conversion of Michael O. Holland’s module works much better than the original. While the kraken makes for a less sensible choice of a being that can only enter through the portal, and while divine ascendance and the temple itself feel still like overkill, this works significantly better. If you can look past these mainly flavor-issues, then round up from my final verdict. As a person, I can’t do that, but as a reviewer, I have an in dubio pro reo policy and thus will round up from my final verdict of 3.5 stars.

You can get this superior version of the module here on OBS!