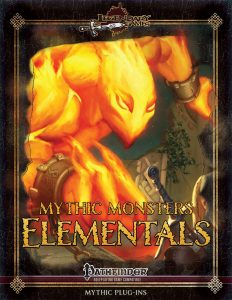 As always, we begin with supplemental material: This time around, that includes two feats: Elemental Expert provides a bonus to Knowledge checks pertaining the elemental planes and increases the maximum HD and decreases the Charisma score of outsiders of the elemental subtype when using planar ally etc. to negotiate with the entities. The mythic version of the feat increases the bonus granted and allows for mythic power expenditure for SP detect elementals. Additionally, summoning elementals via summon monster/Nature’s ally is treated as +1 spell level. Vengeful Summons is an amazing feat for outsiders: After having been called, the outsider may remain for some time, trying to hunt down the summoner….which should be easy, courtesy of a mental link. The mythic version adds quarry to the fray. Glorious feat! The pdf then proceeds to depict 5 conjure elemental spells, the aforementioned detect elemental, as well as mythic versions for both spells, the former of which comes with a 6th tier augment for mythic simple templates added. The book then proceeds to portray a new template, the fission elemental at CR +1, once more, with a mythic upgrade: The template is pure amazing: Basically, the template allows an elemental to collapse into swarm form and reconstitute itself into a fused form. Really damn cool! The mythic version even sports the ability to use mythic power when changing forms for elemental eruptions. Pretty damn cool!

All right, but you’re here for the new mythic critters, right? So, the first would be the CR 13/MR 5 aerial savant: Evasion while far enough from the floor, the option to carry off targets and death attacks should make clear that the mythic upgrade of these fellows is a brutal foe; The build makes use of the mythic Step Up and Step Up and Strike feats for superb skirmishing, with both feats reprinted here for your convenience. Know what’s beautiful, deadly and two pages long? The CR 22/MR 9 mythic anemos: Dispelling winds are cool…but for mythic power-expenditure, these fellows can emit brutal blasts of searing hot or freezing cold wind, heal or cause nonlethal damage to foes. They also can direct the wind to carry messages and e.g. overhear a ton of conversations….and yes, bestowing the blessing of winds and a defensive aura complement this majestic monstrosity. Really cool!

On the other end of CR and elemental spectrum, the Crysmal at CR 4/MR 1, gains the ability to heal via the consumption of jewels as well as a more powerful spiked defense. In a cosmetic cut-copy-paste glitch, the former ability incorrectly refers to the grootslang instead of the crysmal. The classic scanderig, first introduced in the PF AP #4, can also be found: The ore-eating foregfiend clocks in at CR 13/MR 5: We get bonus damage with attacks and a cool upgrade for the searing spew, which makes the metal stack to foes…and as perhaps my favorite ability, they can turn themselves into living wrecking balls. Heck yeah!

Regarding the forces of earth, we also get the CR 8/MR 3 earth veela. Like the other two veelas at the same CR/MR, these receive a beckoning dance that may cause targets to dance with them, which may well be lethal for mere mortals… earth vela can also animate nearby plants, interacting further with the beckoning dance. As a full-round action, the earth veela can cause silence as well as AoE staggering powered by mythic power. Fire veelas are temperamental, gaining the option to fire bolts of flame, which may ignore resistance/immunity – and woe to anyone who spurns them; they don’t take well to being resisted! The water vela receives a captivating song and may hide within the reflections of water. Cool! Edit: Here, I originally wondered about the lack of the air veela – Turns out, I forgot that it had been already released in Mythic Monsters: Slavic. Mea culpa!

While we’re on the subject of water: The mythic tojanida clocks in at CR 6/MR 2 and may fire brine jets and tear apart armor – nice! The Magmin clocks in at CR 3/MR 1 and may use mythic power to superheat its body…and they may eat flames, healing themselves. On the low-level end, the pdf also nets notes for mythic mephitis, at CR 4/MR 1 – a total of 9 variant mephitis are provided, each of which gains a unique breath weapon, as well as a defensive ability that ranges from salt armor to ooze bodies. Minor complaint: The Ice Mephit subheader was not properly formatted, looking like plain text.

At CR 13/MR 5, we also gain a total of 4 different elementals of less common compositions: The ice elemental can conjure forth blizzards and heal itself with ice, and its cold is numbing and staggers foes. The lightning elemental can fire arcs of electricity, transform into lightning and crash through foes, move through metal and use mythic power to create potent, magnetic bursts or charge itself with energy that makes attacking it unwise. The magma elemental can glide through earth and erupt in powerful bursts, lob globs of magma and it may reduce most substances to slag and it may vomit forth a puddle of lava. The mud elemental can use mythic power to drown those entrapped in mud; it can alter its form via polymorph and when it is hit it may use mythic power to attempt to suck weapons into itself…or hold fast unarmed/natural attacks. The build of this fellow is supplemented by the mythic Awesome Blow and Quick Awesome Blow feats.

Editing and formatting are excellent on a rules-language level. On a formal level, I noticed a few minor hiccups, though none of them compromise rules-integrity. Layout adheres to legendary Games’ neat 2-column full-color standard and the pdf sports some really nice full-color artworks. Fans of LG may be familiar with some of them. The pdf comes fully bookmarked for your convenience.

Jason Nelson and Steven T. Helt (or Alex Riggs, Jason Nelson and Victoria Jaczko – the supplement has two author-lines in a weird glitch) deliver an amazing series of mythic upgrades for the often maligned elementals. In d20-based systems, elementals often fall rather short of how cool they actually should be. Where in other games, elemental spirits have a ton of creative abilities, in PFRPG, they instead often feel like the dumb grunts of the outsiders, the things that you summon if calling upon djinn or demons/devils/angels/etc. is too risky. This book helps change that: The elemental creatures within get a ton of cool, diverse options that allow them to do things beyond just bashing foes and casting the usual suspects of SPs. So yeah, design-wise, I love this…particularly the fission template. Its effects should imho be standard for elemental creatures. They consist of an element, so a degree of control over shape etc. makes sense and is something you can observe in many other games. The dual forms also add a level of tactics to them that makes them more interesting for the GM to run. So yeah, really, really cool.

Apart from the minor hiccups mentioned, I enjoyed this very much. My final verdict will clock in at 4.5 stars, rounded up for the purpose of this platform. Seriously, fission elemental benefits should be the standard and makes owning this worthwhile on its own.