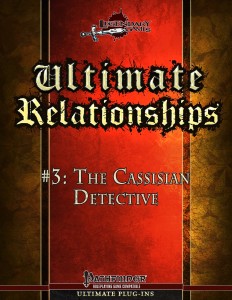 All right, so this time around…we romance a helmet with wings. No, I’m not kidding. Look up the artwork. The statblock is the most complex we’ve seen so far in the series, though, unlike another review I noticed, I saw no glitches pertaining class abilities – the archetype has been correctly added in the iteration of this pdf I read.

Affinity-wise, the cassian detective prefers introverted, silent characters, particularly investigators and the like and obviously has a fondness for riddles and puzzles and, obviously, as a good outsider, he loathes evildoers. A sense of requiring completion makes keeping him around rather easy and he is available for being a cohort as soon as 4th rank.

The detective, interestingly, is devoted to the empyreal lord of departed lovers and as such, entering a proper romantic relationship, abstract though it may be, ultimately would result in conflicting notions, particularly since the entity is currently in a chaste crush on Verity it/her/himself. (This gender-thing is getting confusing regarding helmet-shaped outsiders…apologies. And no, I’m not using “they” – it sounds wrong to me, like finger nails on chalkboard. Sorry.)

That being said, the ranking up procedure of the romance with the cassisian detective easily is the most intriguing so far: For one, the outsider loves riddles, so Int-checks (or out-game riddle-savvy players) are preferred. Secondly, the entity has a perfect memory, so if you’re like me and have a better memory than your players, this can really be hilarious…otherwise, I’d suggest taking notes to properly roleplay him. Which is also, by far, the most awesome thing about this installment of Ultimate Relationships – you see, the cassisian does not know about a chaste crush on his mistress and is interested in the gaps and holes of actions and behavior – having a perfect, gapless memory, he feels intrigued by lack – the objectivity of nothing, the concept of presence heightened through absence, making this character truly well-rounded and unique.

Boon-wise, the relationship unlocks either Linguistics or Perform (Oratory) as class skills and +1 to saves versus visual and sonic effects, stacking with celestial obedience, if present. At 10th rank, the boon, you can 1/day expend 3 full-round actions to duplicate the detective’s careful teamwork performance lasting 10 minutes and affecting only you and double campaign bonuses associated with the detective.

Editing and formatting are good, though not perfect. Layout adheres to a nice two-column full-color standard and the pdf has no bookmarks, but needs none at this length. The pdf has a nice artwork of the outsider.

Mark Seifter’s Cassisian Detective is by far the weirdest of the relationships so far – but it’s also the most unique, intriguing and well-rounded – the character has depth, means for philosophical engagement and character beyond being a relationship-stereotype – in a nutshell, this feels organic and well-crafted. Personally, I consider this by far the most intriguing of the relationships provided so far and well worth a final verdict of 5 stars + seal of approval.

You can get this nice romance/character here on OBS and here on d20pfsrd.com’s shop!
Endzeitgeist out.