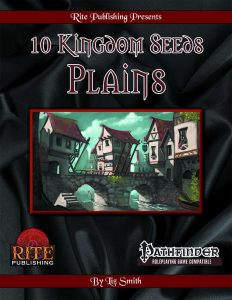 After a brief piece of introductory fluff, we dive right into the nit and grit of this file, namely villages that you can use to craft, bingo, kingdoms from them – each of these settlements comes with a village statblock, but does not end there: Beyond a small summary of the village, we also get one or more sites of interest and 3 different rumors per village to potentially jumpstart adventures from.

So that’s the format employed here – but what kind of villages are we talking about? Well, for starters, LG Belpond, is a surprisingly lawful and cozy village of guild-organized structures, where a visit of the local tavern may see your pockets emptied…only to have the goods be returned to you before leaving! Lightley, in contrast, would be a LE thorp of only 13 folks and is known for its bears.

Taking the example of settlements tied to creatures, the hamlet Morlea, situated between these spectra of the alignment axis at LN, actually does not rest – instead, it follows the migration patterns of the mammoths, making for an interesting and rather evocative backdrop. Ornesse would be an interesting, touristy destination with serious population fluxes, for the chariot race tracks always draw plentiful folks to the hamlet during the racing season.

In contrast to this place, the folks of Prydwin are living by their herbs, which are grown in excessive herb gardens that are meticulously maintained by the populace. Have I mentioned the druidess and her pest-devouring chameleon companion? Revale is either white or red – steeped in snow or showcasing its red sandstone beauty – and the theme of color extends to the primary industry, which hinges upon the extraction of color from rare lichen. Unlike its name, the hamlet shadowhurst is actually known to be a rather lively place, famed for its straw-related craftsmanship and corn.

Soulhill sounds foreboding – and indeed, the village, after an uprising and burning of the previous rulers, has taken to a rather selfish and dangerous demeanor. Westerfox is build around a horseshoe-shaped abbey, with sprawling buildings around, and represents a community that is rather disciplined and tight-knit – formally a meritocracy, but in fact, controlled by a nasty elite. Finally, Woodedge would be a place you don’t want to visit: Buried in banks of tall flowers and flanked by beehives, it may seem idyllic enough, but gigantic bees and rather nasty halflings make this place a dangerous prospect for visitors.

Editing and formatting are top-notch, I noticed no serious glitches. Layout adheres to Rite Publishing’s two-column full-color standard and the pdf comes fully bookmarked for your convenience: While the bookmarks haven’t been labeled properly, they are functional. The pdf sports nice full-color artworks.

Liz Smith delivers a nice variety of small settlements to visit and develop. The respective places have sufficiently diverse themes to make this worthwhile and while I wished this had more room for the individual villages, it does provide enough to jumpstart one’s imagination. Considering the very fair price point and the writing, which provides a nice array of different concepts this time around, my final verdict will clock in at 4.5 stars – and due to the low price, I’ll round up for the purpose of this platform.