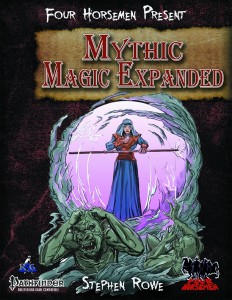 This installment of the Four Horsemen present-series clocks in at 11 pages, 1 page front cover, 1 page editorial, 1 page SRD, leaving us with 8 pages of content, so let’s take a look!

So, mythic magic expanded? But didn’t Legendary Games already cover mythic versions of all spells? Well, thankfully, this pdf does offer something different, namely magical traditions based on mythic feats.

Unfortunately, the very first of these traditions already opens pretty much a can of whoop-ass issues: Blood Magic’s the feat’s name, and it allows you to deal damage to yourself to cast mythic bloodline spells sans expenditure of mythic power. Okay, does the damage affect/require concentration? Three: This makes mythic spellcasting of bloodline spells significantly less limited and based on HP as opposed to being based on the most coveted resource available in mythic game play. This may be less of a problem when playing vanilla mythic gameplay, but if you’re like most GMs I know that dabble in the mythic, you’ll be using Legendary Games’ massive collections of mythic spells, which amps the power up by a bit – for the default-options if no mythic spell exists is to add either +2 to the DC and CL to overcome SR or making it hard to counter (-4 dispel check; needs mythic power to counter).

…okay, the feat will be heavily regulated at my table…but the tradition of Blood Sacrifice? Damn yes, it will come up- ALL THE TIME. The concise codifying of sacrifice of beings with bloodlines is awesome – though I really wished it’s codification extended to creature-types and wasn’t limited to bloodlines/mythic beings. I really love this one, as it provides in-game justification for kidnapping creatures of powerful bloodlines/destinies. Speaking of the topic – there is no single big resource on blood magic out there…designers, think about that!

The second tradition’s feat, Mortal Faith delimits divine spells from the divine source path ability – as long a worshiper has line of sight to you, you no longer expend mythic power, though augmenting still does cost it. This one is pretty brutal, but I can see it work, even though it can be cheesed by having anything even remotely resembling Leadership. The wonderful aspect here, though, is that this one’s tradition codifies the rituals of believers (the more, the better) in a concise and awesome fashion. For making the trope of the believers gathering and praying versus the approaching devastation work alone, this should be in the arsenal of any mythic GM.

Any good GM knows that there is power in the weaving of narratives and similarly, every great storyteller has held this as true – thus, it is my ardent pleasure to report that the act of Storytelling, represented by feat and tradition, coupled with Perform (Oratory), makes an appearance here and codifies the narrative tradition as a powerful means of weaving magic – though I am weary of the DC 50 ability that lets you augment spells even when not meeting the tier requirements – this is just begging to cause problems in the long run and undermines the foundation of the few checks and balances in mythic – I strongly advise GMs to retain tier-prerequisites, in spite of requiring a crowd of 100+ listeners to pull off…heroes with leadership can theoretically get that done rather easily. More elegant would have been simply a scaling mechanism that provides incremental means of surpassing the augment-cap in small steps, requiring ever more listeners (and logistical trouble) to avoid abuse in Leadership-heavy campaigns and prevent low tier characters cheesing it. Other than that, a cool one.

The next one would be Sigil Carving…EDIT: And here, one can see a great example of author-support: The original iteration of the feat had a problematic exploit, which has since then been taken care of – which is awesome indeed and establishes designer Stephen Rowe as an author who is not only a joy to discuss with, but also as someone who deeply cares about his work. Kudos indeed, particularly since the accompanying magical tradition is GOLD and allows for the addition of unique benefits to teh respective items. Kudos indeed!

The next one would also be based on Crafting, but thankfully does not suffer from such glaring issues – Craft Monument allows you to create powerful…monuments that freely enhance regular spells to mythic levels and represent an iconic, cool take on shaping a given campaign world – the means required and the solid rules conspire to make this one all awesome. Oh, two sample ones are included in the deal. Again, iconic…now can we have kingdom building-synergy? Pretty please?

Finally, there would be Warding Circles, which can be made to trap outsiders and thus represent, significantly more concisely than certain spells, with creation-rules being concise and well-presented. The often-featured plot-device of the trapped powerful outsider makes much more sense in this context – oh, and binding the summoned outsider does come with concise social interaction rules as well – nice, no complaints here!

Editing and formatting are very good, I noticed no issues to speak of in those departments. The pdf adheres to Rogue Genius Games’ two-column full-color standard and sports solid stock art. The pdf comes fully bookmarked for your convenience.

Stephen Rowe is a capable designer, but mythic rules are brutal and rather unforgiving: The very precarious balance of mythic rules needs some serious respect to avoid devolving into full-blown number-escalations and infinite exploits. There’s a reason Legendary Games made a handy little book called Mythic Solutions…and when LG began publishing mythic content, there was a learning curve there as well.

Now this pdf, on one hand, is absolutely INSPIRED. The traditions and their concepts are downright brilliant in every way. At the same time, though, there are some components, namely feats, herein that can potentially cause significant issues with the central balance tenets, the few of them mythic rules have, mind you – and break said tenets. Bypassing augment tier-requirements based on audience-size, for example, is something that can be cheesed if your players are like mine and very excited about Leadership. That being said, the most glaring of exploits has been eliminated and what remains are scenarios, which, while sometimes circumstantially cheeseable, remain very much valid and only potentially problematic in very specific constellations.

So, let me state this loud and clear:

This is wonderful and inspired and I LOVE, I ADORE the traditions themselves – they are cool, evocative, awesome….but the flaws of some components also are there. The supplemental feats sport some components that can, in a fraction of games, lead to issues, though the big problem has been, as mentioned above, been taken care of.

If I didn’t love just about everything in this book barring the issues, I’d quite frankly complain more.

As provided, this pdf oscillates between the most brilliant lights in the guise of high-concept tradition as well as some less radiant flecks interspersed. While I cannot recommend this as mechanical perfection due to aforementioned fringe-cases, I absolutely adore the respective traditions and how they are presented: Evocative and crunchy, sans devolving into pure number-fests, always breathing the spirit of high concept tricks. It is my love of the concepts and my sincere hope to see more of them, that makes me settle on a final verdict of 4.5 stars, rounded down for the purpose of this platform – but I also have to expend a mythic surge to slap my seal of approval on this – hard. The concepts of the traditions and their respective execution is inspired.