Trail of the Apprentice III: The Thieves’ Den

Trail of the Apprentice III: The Thieves’ Den 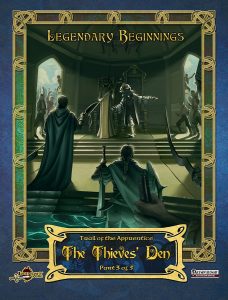 The third installment of the kid-friendly AP for beginning groups clocks in at 48 pages, 1 page front cover, 1 page inside of front cover, 1 page editorial, 1 page SRD, 1 page ToC, 2 pages of introduction, 1 page inside of back cover, 1 page back cover, leaving us with 39 pages. To these, however, one should add the art and map folio, which contains no less than 18 raw pages (already minus editorial/etc.) of maps, both with grid and without, provided sans key and with it – this service is amazing and the art can easily be used as handouts…so yeah, pretty damn cool. Love this.

The supplemental material this time around would pertain an ecology of the monster class hag, which is an adversary kids are probably pretty familiar with already, considering the dominance of Disney movies. The considerations are pretty nice, making them feel threatening sans going the German, classic route…which means, yep, once again, this module should work perfectly fine for all but the most squeamish kids ages 8+; as always, you know best. I certainly can see that work with younger kids, easily.

And this is as far as I can go sans SPOILERS. Potential players should jump to the conclusion.

All right, only GMs around? Great! When last time we left our heroes, they may have succeeded in laying an old king back to rest, but unfortunately, they still are on the hunt for the two stolen serpent statues…and the culprit hired for the job would be none other than the notorious thieves guild Elverrin Skulk. We rejoin our heroes after a massive read-aloud text in the village of Arcadia, situated right next to the wild Umberwood…and it is here the pdf introduces the GM to a specific genre of adventuring I am particularly fond off: The wilderness exploration depicted as a hex crawl. It is a teeny-tiny hexcrawl, for sure, but it is one nonetheless, one in which the PCs slowly but steadily venture forth into the territory of the clawbiter tribe at the behest of Gunhild, the disguised hag who promises to lead the PCs to the skulk if they cooperate…you see, a barghest has taken control of “her” swamp and thus, she wants the menace eliminated.

However that bit plays out, the PCs will sooner or later indeed stumble over the entry to the lair of the Elverrin Skulk, entering, probably by means of pit trap…the gauntlet. The gauntlet is a trap-laden dungeon with a wide variety of traps that do not simply boil down to rolling a die – it rewards being smart…and indeed, it also sports secret doors that allow astute PCs who recognize the mindset of the mysterious Fox Prince, to bypass a significant amount of the challenges of this complex. Following the mission statement of the saga, PCs and GMs are taught something here: PCs get to understand the differences between complexes and dungeons and the rewards for thinking along. GMs are shows how to add an interesting “character” to a complex and how to generate tension without throwing monster upon monster at the PCs. While combat could be spliced in, I’d strongly suggest trying to run this as written – the tricky trap dungeon is something we see all too rarely done well. In the end, the PCs will probably have braved the Fox Prince’s gauntlet…and have a chance of negotiating with the mastermind…who is reluctant to betray the confidence of his clients, but proposes a deal: One of his agents contracted a magical disease that could be healed with something in the possession of…bingo. Gunhild. Pointing the PCs towards the hag, they’ll have a chance to deliver just deserts to the vile crone in a challenging and potentially even a bit scary final encounter.

Finally, the mastermind behind the thefts is divulged – a wizard named Belazeel…as well as the means to potentially get their hands on the wizard…but that will have to wait for the next adventure.

Paris Crenshaw’s third part of the Trail of the Apprentice is the first module in the series I can see work just as well for adults as for kids. Veterans of roleplaiyng games may not run afoul of the hag’s deception, but that doesn’t really matter – the star of this module is the simple mini-hex-crawl alongside the cool, trap-laden dungeon. In short: This teaches finer points of the craft of GMing in a more subtle way, continuing the trend of teaching by showing and slowly building upon the lessons of previous modules. Concise, well-presented and fun, this definitely constitutes the highlight of the series so far, even though, once again, I was missing nonlethal conflict-resolutions with the goblins. Still, the cool dungeon does offset this shortcoming in my book, which renders this well worth 5 stars + seal of approval.

While I based my review on the PFRPG-version, there is also a 5e version here!

If you want the whole saga for PFRPG, you can find it here!

If you want the whole saga for 5e, that version is here!
Endzeitgeist out.