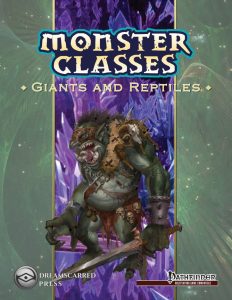 This installment of Dreamscarred Press’ Monster Classes-series clocks in at 14 pages, 1 page front cover, 1 page editorial, 1 page SRD, a page containing only a bit of glossary, leaving us with ~10 pages of content, so let’s take a look!

All right, we begin with the Hill Giant, who, base race-wise, gets +2 Str and Con, -2 Int and Cha, Medium size and normal speed, the giant subtype, low-light vision, +1 natural AC.

The monster class spans 10 levels and has d8 HD, 2+Int skills per level, 3/4 BAB-progression, good Fort-saves and light as well as medium armor and shield as well as simple weapon proficiency. They begin play at 1st level with a slam attack that starts at 1d4 and increases to 1d6 at 4th and 1d8 at 10th level. 2nd level provides 40 ft. rock throwing, increasing the range increment at 4th level and every even level thereafter by 20 ft. 3rd level hill giants increase their natural armor by +2 and every 2 levels thereafter, a similar increase happens – oddly, though, it states a maximum of +9 instead of +10…does that mean that the final step only provides +1 or is there a glitch here? 4th level nets size increase to Large as well as +10 ft. movement rate. 8th level provides rock catching.

Attribute-bonus-wise, this one gets +12 Str, -2 Dex, +4 Con, -2 Int, -2 Cha. Once again, we have a pretty massive front-headed dispersal – +6 modifier built-in allows for some unpleasant combos and thus, makes the monster class not suitable for all types of groups…though, if your game does feature the like, I think the monster class should work for really high-powered games.

The Lizardfolk as presented here gets +2 Con, -2 Int, is a reptilian humanoid with normal speed and 15 ft. swim speed and +4 to Acrobatics. The 2-level monster class has d8 HD, 2+Int skills, 3/4 BAB-progression, good Fort-saves, proficiency with simple weapons, javelin, morningstar and shields. The class begins play with a 1d4 bite, hold breath and +3 natural armor. At second level, that increases by a further +2 and second level also nets claws with 1d4 damage. They also get +2 Strength…at first level. Personally, I’d have moved that to 2nd, but that’s just design-aesthetics. This has plusses and minuses when compared to my favorite Lizardfolk iteration (from Advanced Races Compendium) and no balance concerns – nice one!

The third race/class herein would be the troglodyte, who gains +2 Str and Con, -2 Dex and Int, are reptilian humanoids with a speed of 30 ft., 90 ft. darkvision, +2 to Stealth (+4 in rocky environments) and +2 natural AC. The 2-level monster-class has 3/4 BAB-progression, good Fort-saves, d8 HD, 2+Int skills, proficiency with simple weapons and grants 2 claws à 1d4 as well as +2 natural AC at first level. 2nd level unlocks a primary bite at 1d4, doubles the skill bonuses the race grants and unlocks the signature stench. The spells referenced in said ability are not italicized. Troglodytes get +2 Con at 2nd level. Most groups should be okay with the power-level of these, though very conservative groups may want to go for the lizardfolk instead.

The 4th and final race/class-combo would be the troll. Racial trait-wise, these fellows get +2 Str and Con, -4 Int, -2 Wis and -4 Cha, are medium giants with normal speed, 60 ft. darkvision, low-light vision and +1 natural AC. The troll’s 6-level monster class gets d8 HD, 2+Int skills per level, 3/4 BAB-progression, good Fort-saves and proficiency with simple weapons. 1st level trolls gain 1d4 claws that increase to 1d6 at 4th level, where he also grows to Large size. Trolls are defined by their regeneration they begin play with regeneration 1, which increases to 3 and 5 at 4th and 6th level, respectively. There’s a word missing in the “If the troll takes acid or fire damage, its regeneration on the round following the attack.”-sentence. While the rules cover the starvation/suffocation-angle (nice), for balance concerns, I’d have expected a “no hit-point sharing”-caveat to avoid using HP-sharing with captive/allied trolls for infinite healing. Second level unlocks a 1d6 bite that improves to 1d8 at 4th level and also unlocks scent. 3rd level increases natural AC by +2 and the AC increases by a further +2 at 6th level. 5th level unlocks Rend. And no, I have no issue with this.

Attribute-dispersal-wise, trolls get +8 Str, +4 Dex, +10 Con for a total of 22 points, all among the physical scores, which renders these guys brutal shredders. In conjunction with the abilities gained, this makes the monster class too powerful for all but high-powered games.

The pdf provides the usual glossary and a massive 15 feats – some of which you’ll know from other publications like Stupendous Strength, Aquatic Adaptation or Awesome Blow. Making troglodyte scent demoralizing is a nice one. having more heads or, as a troll, using your limbs to beat up foes is neat, though I’m pretty sure I’ve seen that done before. Cooperative rend is a nice idea for Teamwork.

Jeffrey Swank’s Monster Classes for giants and reptiles are pretty much the definition of a mixed bag – power-wise, we have the giants being pretty strong (though the troll mops the floor with the hill giant) – which feels a bit weird to me. The two takes on the lizardfolks/troglodytes are solid and, for high-powered games, so are the hill giants. In the end, I think that most groups can take something out of this little booklet, even if not all will be suitable for all groups. Thus, in the end, I consider this a solid offering, slightly on the positive side, but not close enough to tip it over to being good -3.5 stars, rounded down.