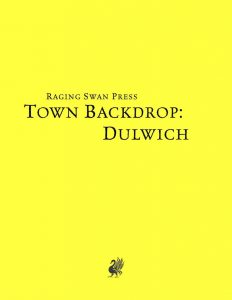 Sorry. I just couldn’t help myself. Bad puns from reviewers aside, Dulwich exists in interesting times for the duchy: A veritable torrent of lumber from the forest helps keep the coffers of its citizens full, and if the machinations of mayor Wido Gall, one of the major players seeking to establish control over the village of Longbridge (one of the finest villages in the classic Village Backdrop series). It should also be noted that the town is situated rather close to the Shunned Valley (as per the writing of this review, only available in PFRPG), where an excellent beginner’s adventure released by Raging Swan Press takes place.

The system neutral iteration of this supplement does not sport, obviously, the settlement stats, but it also gets rid of the marketplace, which constitutes of a minor bummer for me – some dressing/hooks/weird items in its stead would have been nice. PCs that do their legwork may unearth town lore of Dulwich and the pdf does feature a total of 6 rumors the PCs may unearth when keeping their ears to the street.

Now, this would not be a Raging Swan Press supplement without providing delicious dressing to add local color and flair – from the nomenclature and dressing habits of the townsfolk to the local industry and law enforcement (which is, obviously, also involved in the ongoing power struggle), the pdf offers quite an array of interesting details that practically write adventures themselves. This notion is carried further by the brief, fluff-only write-ups of the townsfolk, which not only include the obvious power-players, but also e.g. the head of a local cat burglar ring or a mysterious street performer. It should be noted for absolute purists, that these fluff-only write-ups do properly note the thief class, but instead of “magic-user”, the notes refer to wizards and clerics. Personally, I don’t mind that, but since one of my readers complained about me not mentioning that once…well, there you have it.

The system neutral version does not have the minor settlement statblock hiccups, but loses its marketplace, which evens, as a whole, things out as far as I’m concerned. Still, considering how much I enjoyed this, my final verdict will clock in at 5 stars + seal of approval.

You can get this great town here on OBS!