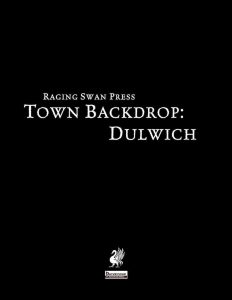 Sorry. I just couldn’t help myself. Bad puns from reviewers aside, Dulwich exists in interesting times for the duchy: A veritable torrent of lumber from the forest helps keep the coffers of its citizens full, and if the machinations of mayor Wido Gall, one of the major players seeking to establish control over the village of Longbridge (one of the finest villages in the classic Village Backdrop series). It should also be noted that the town is situated rather close to the Shunned Valley, where an excellent beginner’s adventure released by Raging Swan Press takes place.

Now, as always in these settlement supplements, we do get settlement properties for the PFRPG-iterations, though this time around, a couple of plusses (before Economy, Lore and Law) are missing, alongside the +5 before the danger modifier. These represent mostly cosmetic hiccups, but yeah. PCs that do their legwork may unearth town lore of Dulwich and the pdf does feature a total of 6 rumors the PCs may unearth when keeping their ears to the street. A big plus: We do get a properly codified marketplace section that mentions locally-sourced, adventuring-relevant items that may be purchased.

Now, this would not be a Raging Swan Press supplement without providing delicious dressing to add local color and flair – from the nomenclature and dressing habits of the townsfolk to the local industry and law enforcement (which is, obviously, also involved in the ongoing power struggle), the pdf offers quite an array of interesting details that practically write adventures themselves. This notion is carried further by the brief, fluff-only write-ups of the townsfolk, which not only include the obvious power-players, but also e.g. the head of a local cat burglar ring or a mysterious street performer. As befitting of a place with an increased likelihood of having adventurers return (or stay longer!), the town is supplement with a 2d8-table of events, ranging from funeral processions to blacksmiths demonstrating their goods to more outré examples, like the guardsmen passing by with a woman wearing a metallic mask in command, who drag a bedraggled merchant to the keep in chains…well, if that’s not intriguing… 11 sample sites and places of interest in the town are provided in further detail: From the goals of the masked woman in question to the temple/court to the guild hall, the main sites and concentrations of power are covered – but so are the back-dealings that are less obvious: Beautiful femme fatale jewelers who may make a grab for power, a library, various taverns and inns (with costs and notes for food and drinks!) to the marketplace, the locales come with plenty of interesting angles.

Editing and formatting are very good, though not perfect. Layout adheres to Raging Swan Press’ elegant two-column b/w-standard and the pdf sports nice b/w-artwork. The cartography by Tommi Salama is gorgeous and in b/w. The pdf comes in two versions, one optimized for screen-use and one to be printed out – kudos!

Dulwich is at once open enough to allow a Gm to easily plug-in material, and specific enough to constitute a detailed home with its own flair for the PCs. The writing also manages to elicit an atmosphere that is pretty unique, as far as fantasy is concerned: This may just be me, but with the power-struggle ongoing, covert machinations and the power of guilds, this inevitably painted the fantasy equivalent of a Roaring 20s boomtown gangster epos for me, with slight touches of noir – all firmly situated in a Greyhawkish fantastic context, mind you. This effect is very subtle, mind you – you won’t have gunslingers running around the streets or the like; this is traditional fantasy, after all! But it should be taken as testament for the rather nuanced writing that this notion sprang to mind in the first place.

While the forgotten plusses in the village-stats annoyed me, they are not enough to tarnish this great, evocative town. My final verdict will clock in at 5 stars + seal of approval.

You can get this amazing town here on OBS!