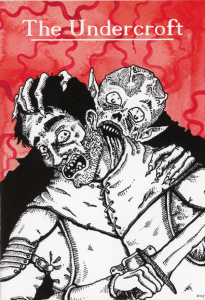 The seventh installment of the Undercroft-‘zine clocks in at 22 pages (not counting cover, editorial, etc.; laid out in 6’’ by 9’’/A5) of content, so let’s take a look!

The default system intended for this ’zine would be LotFP (Lamentations of the Flame Princess), and, as always, the material can be adapted to other OSR-systems with relative ease, particularly since the stats are presented in a way that references e.g. plate mail, etc. instead of fixed values. This is a horror/dark fantasy supplement, and as such, reader discretion is advised – if you’re easily offended or triggered, consider this to be your warning. This review is based on the saddle-stitched softcover of the ’zine. This installment is all about creatures and things pertaining to them.

All right, we begin with Evey Lockhart delivering the goods, in spades: Lavishly-illustrated, we are introduced to the Omnicorn, aka the Freedom Beast. Picture a unicorn, a truly majestic steed – and yet, twisted, for it bristles with all defensive measures of mother nature – antlers, horns, spines; it could be a force for true change, as it seeks to topple despots…but, ironically, it is incredibly dogmatic in its adherence to radical revolution – a contradiction that will make it turn violent. Like pretty much anything. ANY, and I mean ANY (in the largest allcaps you can imagine) form of authority must be toppled. The creature’s blood, freely given, can end compulsions, so there is ample reason to engage with the beast in a roleplaying manner. Oh, and the beast comes statted (AC noting “as plate”, and unique effects of the attacks possible. This thing is deadly, glorious, and a thoroughly fantastic critter that oozes roleplaying potential. A pitch-perfect, darksome twist on a central irony. And in an age of online-activism, for good or ill, thinking about whether we behave omnicorn-wise might be a smart strategy…

Luke Gearing also has something to contribute here – the mezzo-worm: Things of the speed of runaway trains (this should specify at least a reference-value of something that exists in the game; for comparison, the omnicorn notes that it’s twice as fast as a warhorse); these gigantic worms generate a labyrinth, where stragglers are lost, for the tunnels connect space and time, which is probably the most interesting aspect of these things, which sets them as a plot device apart from other such worms. Still, I’ve seen the author do better.

Ezra Claverie is up next, and presents the decoherence wights – elves exposed to a necrobaric bomb, infected with colonizing anti-life; the lore presented about the Last War made me want a full-blown campaign setting here. It’s genuinely that good. With swarms of horrid things and the chance to contract decoherence fever, with different types (including decoherence polyps) provided, this is an amazing entry regarding its flavor; the sequence of presentation also makes more sense than the author’s previous offering, but there is no comfortable formatting; you still have to parse the entire text, and no traditional statblock is provided. That being said, the sequence of presentation is not as confusing here, and you can read the wights in a more efficient manner. It’s not perfect, but the strong concept carries the article and makes it worth perusing and implementing.

Daniel Sell presents a section that can be explained as a new context for the classic orc – tapping into anxieties such as devolution, this one is clever, in that it is written in essentially a scientific jargon reminiscent of social-Darwinist agendas, so is the content presented truly reliable? The whole tone seems to suggest otherwise, but the details also provide tidbits that make orcoidism and the like scary, or at least, unsettling. This juxtaposition of tone and subject matter, and the unease created by both, is genuinely smart. Like it!

Finally, we have James Holloway providing Old Sigvor, a truly twisted and delightful take on the witch-trope – the hag has fused with trees and became a twisted plant/crone-hybrid, now seeking to make more hybrids. It’s a straightforward angle, but one that has been executed rather well here. Big kudos, and once more, a creature I’d definitely consider using/adapting in the Witcher RPG or Dolmenwood.

Editing is well-executed in a formal and rules-language level; formatting is more consistent in this installment than in the previous one, though the creatures are not consistent in their presentation: Old Sigvor has, for example, proper AC and the like noted, while the other creatures reference at times analogues from the system – or not from it. The stitch-bound softcover is a nice booklet to have. All creatures have cool, original b/w-artworks.

Daniel Sell, Luke Gearing, Ezra Claverie, Evey Lockhart and James Holloway provide a ’zine of high-concept, high-quality critters; with the exception of the mezzo-worm (which is a bit quaint in comparison), I adored every single critter herein, and the mezzo-worm, were it not contrasted with Luke Gearing’s previous work and the other gems herein, would have received a warmer reception. Anyhow, the ’zine is slightly inconsistent in its creature statistics presentation, and that is a bit of a big deal for me; however, after much deliberation; I decided to round up from my final verdict of 4.5 stars, and I’ll also grant this my seal of approval, for the sheer amount of really well-made horror critters herein that demand being used. If you even remotely enjoy twisted, dark critters, check this out.

You can get the pdf of this amazing collection of monsters here on OBS!

Do you prefer print? You can get the ‘zine here on Exalted Funeral’s store (preferable if you’re from the US), or here directly from the Melsonian Arts Council.

Enjoying my reviews? Please consider leaving a donation or joining my patreon here.