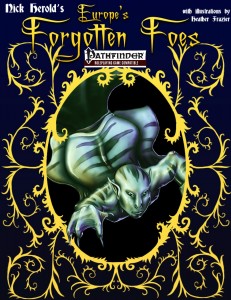 This collection of monsters is 14 pages long, 1 page front cover, 1 page editorial/ToC, 1 page SRD, leaving us with 11 pages of content, so let’s take a look, shall we?

The first of the new creatures is one your players will hate. I guarantee it. Why? The bovine/equine, 4-horned CR 5 Bonnacon tramples foes, has deadly hooves and treats its natural weapons as secondary weapons. So far, so common. Where players will start HATING this beast is when it starts unleashing its signature ability: Conical blasts of burning feces. Yes. And yes, the burning excrement clings to the bodies of those hit. I feel the distinct NEED to use this critter. Fast. Two thumbs up, especially since it comes with the variant CR 6 Khalkotaurs, fire-breathing white bulls in case you don’t want to humiliate the PCs that much – but why would you? 😉

AT CR 11, the Calafex are humanoids with tentacled lower torsos reminiscent of octopi and get the ability to jet-blast through the depths, constrict and grab foes and supplement these melee powers with the spellcasting capabilities of a 9th level sorceror – with the caveat that they may choose spells from both the cleric and sorceror lists.

At CR 20, Carcohls (from the French legend of Hastingues, in case you were wondering) are deadly – that’s a given. But what are they? Essentially, think how the most disturbing cross between a titanic snake and a snail, with tentacles from the mouth, acid slime trails, a breath weapon and ridiculous toughness would look like and there you go! Very cool, disturbing behemoth of a creature!

One of the weirder beings any PC will ever encounter would be the CR 1 Gryllus (no, not the field cricket, the one from Greco-roman legend…) – a weird humanoid mish-mash of animal parts with two human faces that can not only emit stacking wails, but also spread its wis-damaging curse via attacks: those that succumb to the curse transform into these hideous beings themselves and while the transformation is reversible via appropriate spells, these beings should drive fear into your players. After all, who wants to end like THAT? As supplemental material, information on Greater Grylli (At CR 3) and the spell to create these creatures have been included as well.

The CR 8 Scitalis are related to the wyvern  and are not only extremely hot, resulting in a blur-effect (which can be countered by enough cold damage – VERY cool!), but also with mesmerizing, scintillating colors.

The final beast is a classic of European mythology – the Yale, at CR 9, may look a bit like an antelope, but is actually surprisingly intelligent creature with flexible horns that not only makes for a good duelist, but also an honorable companion. Information on how their horns may be used for enchantment purposes is provided as well.

Editing and formatting are top-notch, I didn’t notice any glitches. Layout adheres to a nice 2-column full-color standard and the pdf offers neat original full-color artworks for each and every creature herein – rather cool, especially at this fair price point! The pdf comes fully bookmarked and in two versions, with the second version being more printer-friendly.

Nick Herold has done it again and crafted a bestiary of intriguing creatures from myth that breathe antiquity while still being fresh – and better yet, the supplemental pieces of information add further value to this superb little collection of monsters. All of which come with at least one cool signature ability (though the dual spellcasting of the Calafex didn’t wow me), rock solid statblocks and all of them demand to be used. this is the definition of a short all killer, no filler bestiary and hence worth 5 stars + seal of approval.

You can get this pdf exclusively here on Paizo.com.