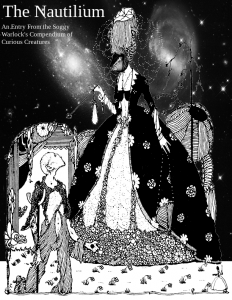 This pdf clocks in at 2 pages – 1 page is an interesting b/w-artwork/hand-out-style version of the creature, the other page contains the text.

The pdf does not note a particular system or presents stats per se – instead, it lists the numbers that may be encounters, the suggested level range, and for Armor, it notes e.g. Unarmored or Dressed for a Ball (as leather or mail); similarly, weapons note analogues: Attacks with their opium pipes are resolved as though they were black-jacks; radiant pistols use the stats for crossbows. So yeah, you’ll need to do some adjustments.

The Nautilium are essentially a highly-sophisticated race of pseudo-18th-century aristocrats that are known for being super-charming to those they consider to be their equals or betters. Bad news is that this doesn’t include most beings. In fact, they are small nautilus-like creatures that subsist on mammalian organs and brains, consuming them and then piloting the bodies of the victims.

If smoking, they may exhale 60 ft. conical bursts of opium that render non-nautilium confused and sluggish for 10 minutes or a Turn. (“Turn” here being used in the old-school way, not in the modern use of the term.)

Editing and formatting are okay. Layout adheres to a one-column b/w-standard, and I liked the collage-style artwork of this weird race. The pdf has no bookmarks, but needs none at this length.

I like the idea of Ian Woolley’s strange critters here; the execution does suffer s a bit from being system agnostic, but personally, I was slightly more irritated by the prose, which the author can do better: “These well-dressed folks hail from the stars. They are an aristocratic people.” – you get the idea; not exactly poetry. All in all, this is a solid idea, but less interesting in its execution than it deserved. My final verdict will be 2.5 stars, rounded down.

You can get this creature here on OBS!