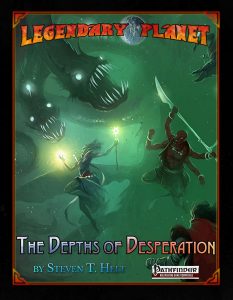 I was a backer of the legendary Planet AP, but not otherwise involved with the creation of this book. It should be noted that this module comes with an art and map folio that clocks in at a mighty 39 pages – that’s all the art inside, ready to be used as a handout, AND player-friendly maps of ALL of the maps featured in the adventure. That is not only AWESOME, it should be industry standard. Huge kudos for this!

The module is written for 4 PCs of at least 14th level and 3 mythic tiers, and the PCs should achieve 17th level over the course of the module, if you’re using the suggested Medium advancement track. The module features the mythic trial to attain the 4th mythic tier. Structurally, we follow the well-established AP-formula of the series:  Chris A. Jackson provides aneat piece of fiction, and we get a plethora of supplemental material.

Article-wise, we have a detailed observation on mixing science-fiction and fantasy here that goes into quite a lot of detail for the GM – salient advice, which is supplemented by rules for orbital re-entry and space vacuum; these do include more mystical takes on vacuum. If you do want to include spacefaring in your game, the book offers rules for warp engines and technomantic countermeasures (which makes tampering magically with tech harder); these are kept intentionally pretty wide open regarding the flavor, allowing for maximum customization options. 4 feats are presented: Daunting Interface makes technological items you craft harder to identify or activate. New Best Friend halves the nonproficiency penalty for weapons and equipment (if taken twice, it completely eliminates it), and lets you use even equipment that would otherwise be incapable of being used, provided you can train. Translated Spell is a metamagic feat that eliminates the [language-dependent] descriptor in exchange for +1 spell slot. Finally, we have Environmental Adaptation, which helps dealing with dangerous environments, including space. Minor nitpick: This references “points of mythic power”, which should be “uses of mythic power” instead; this does not otherwise compromise the functionality of this mythic feat, though. The section also features 4 spells: Flicker and its greater version hamper electricity-based effects and tech with specialized suppression fields; mundane paradigm nets an object SR, and mundane resistance nets objects a scaling bonus to saves versus magic. All in all, Steven T. Helt delivers a cool section here.

The gazetteer section this time around covers the gorgeous waterworld of Vareen – and I strongly, as always, recommend reading it prior to running the adventure. The item section includes equipment wielded by the octopus-like bil’djooli, including armor, rods that can fire different types of energy, glassteel helmets, magical ink bladders, stasis grenades and a substance that allows for breathing of water/air, a new material, the varianian coral, as well as toxin filters and vents, the latter being particularly relevant for bil’djooli. The module’s bestiary btw. comes with 4 bil’djooli stats, ranging from CR 6 to CR 13/MR 2. Beyond that, we have stats for several aquatic threats: Conch trees, two cool fish, the varinian sky spore (CR 11), as well as for the Loran race (CR 5); these are engineered mutations based on undine, and are pretty potent; while player-race information is provided, I wouldn’t allow these in my games, unless featuring generally high-powered races. Beyond the deadly monster depicted on the cover (which is pretty awesome), my favorite monsters herein were the invertebrates:  We have varinian seastar (Large starfish), a crab that can share emotion effects of others, and a Colossal deep tiger anemone that has frickin’ fantastic artwork.

Okay, all of this out of the way, it’s time to discuss the adventure – and you know what that means: From here on out, the SPOILERS reign! Potential players should jump ahead to the conclusion.

All right, only GMs around? Great! Relstanna, the elali ally of the PCs, comes to them with the krang warrior Khedri, showing off the substance stralleth, which allows for the breathing of water and withstanding of pressure – they show this substance to the PCs, because we go to the water world of Vareen this time around – once more in search of a gate home. Plus, good news: the planet’s locathah civilization is actually nice, friendly even…bad news, though: Recently, the Hegemony has started an all-out war on Vareen, with the octopus-men bil’djooli  leading the charge. These toxic octopus-people ooze literal poison, and have a rigid hierarchy – think of them as tyrants of the deeps. Relstanna sent an ambassador to the place – but so far, no news has spread back. From submerged Pol-Nephar on Argos, the PCs should travel to Vareen…

…and the module makes no prisoners. The scene on the cover? That’s what happens! The massive Lasiodon, one of Vareen’s deadly predators, has, alas, eaten the ambassador. If a PC gets swallowed, they’ll find the corpse – and the module accounts for information gained by reviving the dead ambassador or talking to their spirit! This’d be a good place to talk about this being a massive, aquatic adventure: The PC’s Morphic Form feat does allow the PCs to ignore many of the limitations of underwater combat, pressure, etc. The module explicitly calls out the importance of visibility, though…and this is 3D in many instance, obviously. In case you want to go another route, I can recommend Alluria Publishing’s Cerulean Seas Campaign Setting for aquatic hazards, rules, advice on running such adventures, etc. Adding that rules-material is pretty simple, but not required. In short: If you usually shirk away from underwater adventuring, this has a means to run the adventure without needing to include all the default underwater adventuring rules.

First contact with both locathah and bil’djooli will probably happen at Surface Station Nine, and meet Strael, a locathah engineer – ultimately taking them to Simrukoth, grandest of locathah cities…and last line of defense for the locals! For the war against the Hegemony is one that the locathah are losing currently big time! As the PCs converse with the emergency council, they’ll have a chance to thwart an assassination attempt by several Hetzuud slayers, which may or may not dissolve in a chase through a bazaar – hopefully, the PCs can take down the shapeshifting spies!

The second part of the module is pretty epic: It’s a big sandbox with several keyed missions that are all about strengthening the war effort; these operations include attempting to take the surface station six, which has been converted into a soldier-slave procession facility, sabotaging the Hegemony’s communications relay, a diplomatic mission to ocean giants…and three rather cool trips to recruit unique monsters: These include the Land-Eater (the mommy of the ginormous monster the PCs might have slain when they arrived…hopefully, they cleaned up well, washing off the scent…), a colossal mantis-shrimp (heck yeah!) and the last of the Bardezites, now undead, as a further unlikely ally. We also have ruin exploration here (including an interesting puzzle combat of sorts), and timed assassination/response tactics help keep up the pressure here. Oh, and the PCs may well have to deal with a rather deadly scouting troop coming for the city.

Ultimately, the fate of all of Vareen, and that of planets beyond, hangs in the balance when the vast battle for Simrukoth commences, and the vast battle begins. Yes, BATTLE! The module makes use of the mass combat rules! If you’re not interested in those, fret not: The pdf does come with a full recap, and you could theoretically ignore them as a whole – for the battle also sports a whole selection of key-scenes, which the PCs resolve on a character level (though I do recommend running the combat!), which include daemonic allies, attacks on Surface Station One – and finally, direct assault on the bil’djooli flagship, the Subjugator, where the powerful bil’djooli navarch and his genocidal daemon-ally commanding the Hegemony forces need to be dealt with! And yes, the PCs can, provided they did a good job in aforementioned ruins, actually go home now…but the saga is not yet over! After the epic conclusion of the battle for Vareen, more is yet to come…

Editing and formatting are very good on a formal and rules-language level. Layout adheres to the series’ two-column full-color standard, and the pdf-version comes with plenty of original full-color artwork. The pdf is fully bookmarked for your convenience, with bookmarks provided per chapter-header/part, but not per sub-section. The inclusion of the handout/map-booklet is AMAZING, and the cartography in full-color, which includes player-friendly versions of the maps, is super-appreciated.

Steven T. Helt’s “The Depths of Desperation” represents, at least to me, a return to form for the AP. While “Confederates of the Shattered Zone” had a fantastic environment to explore, it honestly felt to me like it tried to do too much in its page-count, and became a bit busy as a result. “The Depths of Desperation” knows exactly what it wants to be, has a tight focus and theme, and executes it. This doesn’t feel like it could have used 20 or so more pages, or more maps or the like – the module delivers upon the promise of underwater warfare and really makes the PCs feel like they are waging a grand war, focusing on a variety of challenges, many of which don’t center around slaying foes…so here’s to hoping your PCs do have some social skills or magic in that regard.

The sheer sense of epic adventure this breathes is great; the PCs are incredibly powerful, and thus, the module lets them do incredible feats – like recruiting essentially Godzilla-class beasts for the war-effort, like single-handedly turning the tides of battles. It also brings the threat of the Hegemony more front and center, because the PCs finally get to directly confront large-scale forces of their foes. Better yet, all the build-up is successful: The AP has shown remarkable restraint with regards to its villains, and after this module, the PCs will know why the Hegemony is so damn feared throughout the setting of Legendary Planet. Throwing these villains sooner, in weaker iterations, at the PCs en force would have diminished the impressive impact this module has. Very few players will want to “go home” and call it quits after this truly epic scenario; at least, I can’t picture a group that’d stop now.

If your group is really into the nit and grit of rules, you might want to check out Cerulean Seas and add the rules therein; if your group loves mass combat, get Ultimate Battle and Ultimate War. And if not, fret not, for the module allows you to run both the underwater aspect and the mass combat without using either sub-system., should you prefer a more narrative approach: You can just run the events, if you’d prefer that. This potential for customization is just the last bit that elevates this module beyond its already impressive basics for me. So yeah, this is definitely one of the highlights of the AP for me. My final verdict will be 5 stars + seal of approval!

You can get this EPIC adventure here on OBS!

While my review is based on the PFRPG-version, there are other versions as well:

Ultimate Battle can be found here!

Ultimate War can be found here!