So What’s For Sale, Anyway? V 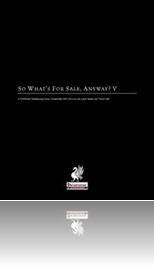 The fifth installment of Raging Swan Press’s „So what’s for sale…“-Series is 20 pages long, 1 page front cover, 2 pages editorial, 1 page ToC/foreword, 1 page advertisement, 1 page SRD and 1 page back cover, leaving 13 pages of content, so let’s check out what exactly we get here!

Immediately, the difference from other installments of the series becomes apparent – instead of a variety of lists, we get rather complex rite-ups of the respective magic items. These notes contain not only descriptions, the true names of the items and lore-sections, but also often at least some kind of idea/plot-seed to introduce them to your campaign. The items range from cantankerous/annoying to truly benign and have their own abilities – which they of course can use at their own discretion. Some of the prompts for the abilities are neat – a particular glaive, for example, wants to be stroked, while a rod of wonders turns out to be truly malicious and adept at calming emotions.

The magic items run the gamut of alignments and several of them actually have the power to conceal their magical nature. Even better, they tend to provide interesting angles and come in unconventional forms – there’s e.g. a sapphire, a socialite’s hand band and even a gruesome corset made from the remains of good humanoids.

Editing and formatting are very good, though not perfect, as I’ve come to expect from RSP: There’s e.g. a typo „wickeT“ which should read „wicked“ and I noticed some similar glitches. While not enough to impede my enjoyment of the pdf, it still is something I feel I had to share. Layout adheres to RSP’s classic two-column b/w-standard and the pdf comes with two fully bookmarked versions – one intended for the printer and one for screen-usage. I really like the direction the series takes with this pdf – going from simply providing lists of magic items for communities, this on eis actually a magic item book in disguise, that, while still providing information on where they can be bought, does so as almost an afterthought in favour of all the original content herein. The items are smart, come with interesting abilities and form and a lot of cool details. However, you should be aware that e.g. no sample settlements are included in this particular installment, as the focus is simply a different one. If you’re aware that you’re in for a book of interesting magic items with their own intelligence, this pdf will definitely suit your tastes. However, I’m not sure whether it can be truly considered a part of the core-line of „So what’s for sale…“-pdfs and instead should be considered to be „So what’s that intelligent magical item like?“. Apart from that and the very scarce glitch, I have nothing to complain, though. Overall, I love how this installment is brave, expands the focus and provides quality content and thus will settle on a final verdict of 4.5 stars, rounded up to 5 for the purpose of this platform.

So What’s For Sale, Anyway? V is available from: