The Ferryport Adventures – The Goblins of Kaelnor Forest

The Ferryport Adventures – The Goblins of Kaelnor Forest 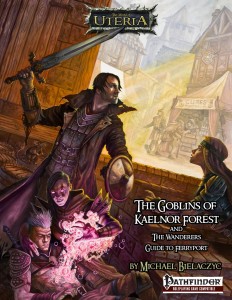 Now this can be very much considered to be a combo module/sourcebook and as such, the following review will contain SPOILERS. Potential players should jump to the designated end of the SPOILERS, where I will begin commenting on the sourcebook-section.

The pdf begins with a general introduction to the world of Uteria, with a map also depicting a part of the continent. The unique component here would be one that is indebted to low/rare-magic games – magic has only recently returned to the gritty world of Uteria and as such, is greeted with mistrust and some trepidation and prejudice. However, much like most good solutions to the mechanical repercussions, the pdf acknowledges the option to explain “magic” weapon abilities as a kind of superior craftmanship. Furthermore, magic works akin to in Dark Sun – i.e., one’s magic can drain the land akin to the concept of defilers or via slow increases. While the Mana-point-based casting is explained in the Elves of Uteria sourcebook, I do believe that this pdf ought to have provided at least an abbreviated section on this spellcasting system, mainly due to one of the pregens being a caster.

Each character also has a legacy item, a signature possession which will increase in power over the levels. Among the additional rules provided, there would be so-called horde-rules, which, alas, are not good: Intended to represent overwhelming numbers, I applaud the general notion, though, alas, the rules-language that is employed to convey its limitations falls behind the notion by being more opaque than it ought to be: The base idea is to reward successive attacks versus one target. Alas, the pdf fails to specify when such a bonus actually decreases, if at all. As a nice alternative, I’d suggest using 13th Age’s Escalation Die AGAINST the PCs at all times they are outnumbered for a similar, more elegant way of depicting the threat of being overwhelmed.

So, from here on out, there be SPOILERS!

Still here? All right! The PCs begin this module in a tavern…yeah…bear with me, and find a note that promises rewards for investigating stolen goods and reporting to a nearby guard-tower. A quick investigation with an irritating local farmer later, the PCs will be off towards the forests, where, sooner or later, they will encounter the first adversary – a spider-riding goblin accompanied by a horde of spiderlings. Besting said foe, the PCs will have a chance to participate in a non-combat encounter with the wood’s elves, before being pointed towards the main locale of the module:

A dilapidated tower in the midst of the forest has been made the fortress of some of these odd goblins. The presentation here does some things right and some wrong – I do love that e.g. the combat-relevant stats for e.g. dire rats are provided in an abbreviated form, thus not requiring you to skip books. On the downside, e.g. some traps do not adhere to the proper presentation-standard – while functional, e.g. an easily spotted tripwire does not sport a DC to disable. This does not extend to all traps, mind you, but such instances can be found. Map-wise, both the tower and the caves below it are covered via solid full-color maps, though I wished player-friendly versions had been included in the deal. Speaking of which – the presentation of statblocks also deviated from the established standard in minor ways, so if that type of choice annoys you, that’s something to be aware of. The exploration of the small complex is pretty solid, with acid spitting slugs and the like being interesting creatures to be encountered. The read-aloud text is also rather nice, though ultimately, I was a bit annoyed by the lack of consequence that entails regarding the enemy status: While the first goblin can escape, resulting in a complex that is “alarmed”, there is not really any relevant consequence for the goblin getting away. A slightly more organic set-up could have helped here.

On the plus-side, the pregens provided come with advice on how to play them as intended – advice you can easily ignore, should you choose to. Still, nice!

Beyond the pages of the module-section, we begin with the main-meat of this book, namely the massive gazetteer-like section of this book that depicts Ferryport (fully mapped) and its surrounding area – between pieces of in-character prose, information on backgrounds and motivations of most movers and shakers (who also come with beautiful b/w-artworks) and the like, we receive a significant array of interesting information. More importantly, the write-ups are truly captivating – with colorful personalities and descriptions drawing you right in, the array of interesting motivations and backdrops providing a LOT of fodder for a DM to use. Speaking of DM – herein, the DM or GM is called SG – story guide. Personally, it irritated me. I won’t hold that against the pdf, but it’s pretty much as annoying as having a cthulhu keeper being referred to as DM. Then again, I might just be overly nitpicky and no, this does not influence my final verdict.

If the personalities alone were not enough inspiration for you, then the guilds themselves, also detailed in fluff-only, but captivating prose. Now this pdf does go a step beyond, with some lavishly-rendered locations receiving hand-drawn, functional maps – though I wished the maps had been collated on one page in the end of the pdf – as provided, you’ll have to print out the page and cut out the map. It should be noted that multiple level taverns, inns etc. Alas, you will not see any settlement statblocks or the like herein.

Editing and formatting can be considered good, though not perfect, mainly due to some deviations from established formatting standards and some minor hiccups regarding formatting. Layout adheres to a nice full-color 2-column standard. The artwork deserves special mention – there are quite a few GORGEOUS full-color pieces herein, one of which reaches the awesomeness of the cover. Others adhere to different styles (all btw. crediting the artists – nice!), some recalling old-school style. The pdf also sports some of the most beautiful b/w-artworks I’ve seen in ages – a couple of them are downright evocative. At the same time, though, there are some artworks that look less refined, thus not really providing a unified style – personally, I didn’t mind, though your mileage may vary. Cartography is generally functional, though once again, you will not see a unified style. Unlike the artworks, the maps remain mainly on a functional/okay-level and do not sport player-friendly versions sans keys etc.. Annoyingly, this pdf comes sans bookmarks, thus making navigation more of a hassle than it should be.

Michael Bielaczyc, Dane Clark Collins, Shonn Everett – you have generally created a solid first level module with an evocative gazetteer. As written, you may indeed consider me intrigued by Uteria, mainly since it draws upon plenty of concepts near and dear to my heart, with a flair that feels very much down-to-earth and akin to some Ravenloft/Dark Sun-ideas. This seems to have the potential for being a pretty much awesome dark fantasy world and especially the gazetteer-component of this book did captivate me and made me want to read more about the world. The module itself does suffer a bit from the traditional “1st level -vs. goblin-syndrome” in which it simply does not provide a too compelling narrative or theme. That being said, as far as the theme is concerned, this module actually manages to provide a somewhat different spin on the concept – the vermin-association and general presentation help rendering the module component valid.

Ultimately, I would have loved more gazetteer – this section is very much fun and compelling, to the point where I wasn’t even galled by the absence of stats for settlements and NPCs. Conversely, I do think the module would have greatly benefited from +10 pages: Further hazards, traps, a less linear set-up ad generally more player-agenda would have made the beginning in particular more interesting. While it plays as a sufficiently fun module, the set-up in the beginning until the PCs hit the adventure-site very much can be considered too railroady and could have used some more things for the PCs to actively do in order to emphasize an illusion of more choice.

How to rate this, then? I’m torn. This is a compelling sourcebook and provides some tantalizing glimpses at a world I am excited to learn more about. At the same time, the module itself did not blow me out of the water with its rather conservative make-up and fell quite flat for me. And then, there are the minor hiccups – no bookmarks, problematic wording here and there – one can find quite a few minor deviations from the established rules-language standards. All of this, though, does not detract from the compelling prose.

In the end, this module/sourcebook does a lot of things right and has great production values – but it does suffer from quite a few problems and glitches one can see in the work of less experienced publishers and authors. This, however, is not the first offering in the world of Uteria, so alas, no freshman-offering bonus. After much deliberation, I will settle on a final verdict of 3 stars – whether you consider this better ultimately depends what you want: If a fluff-only sourcebook that has some cool food for thought is what you’re going for, this may well be worth it. If you primarily would get this for the module, you probably won’t be that blown away.

You can get this module/sourcebook here on OBS.