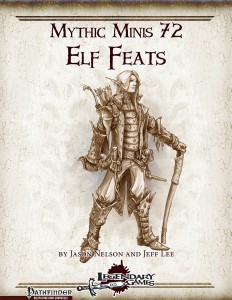 -Attuned to the Wild: When in the selected terrain, triple natural HP recovery rate. +tier to Survival in the chosen terrain. Use mythic power to gain fast healing equal to 1/2 your tier for 1 minute.

-Discerning Eye: Increase racial bonus to +3 and also apply it to rolls opposed by Sleight of Hand and Disguise. Use mythic power to reroll a failed check to which the bonus applies.

-Elven Battle Training: Increase bonus vs. sunder and disarm to +4, also applying it against steal maneuvers for the listed weapons you’re carrying and to saves that specifically target them. Also, choose one weapon you’re proficient in – gain +2 AC versus attacks made with said weapon. Spend mythic power to extend the latter bonus to all weapons listed for tier rounds.

-Elven Spirit: Gain 2 racial traits, including elven magic and ones that are exchanged for elven magic, even providing guidance for lightbringer or spirit of the waters.

-Exile’s Path: Think in two languages at once, auto-failing attempts to read your mind unless the target is fluent in common and elven. Also reroll any Will-save, not just enchantments and use it more often via mythic power. Nice one, especially if your campaign is kind of language focused.

-Guardian of the Wild: Increase dodge bonus in chosen terrain to +4 and gain +2 to Ref-saves. You can also expend mythic power (here erroneously called mythic tier) to ignore cover or concealment granted by the terrain for mythic tier rounds.

-Half-Drow Paragon: Has a minor formatting glitch in the Prereq-line. Use mythic power to use the mythic variants of your racial SPs, also granting them as spells known, if you can cast spells.

-Human Spirit: Each level, choose a bonus skill or the favored class bonus for whatever class level chosen. You are not limited to gaining only 4 skill ranks.

-Mage of the Wild: Increase bonuses in the attuned terrain to +4. Use mythic power to make AoE-spells in the terrain not hurt animals pants or the terrain. Nice one.

-Multitalented Mastery: Also gain favored class bonus in addition to hit point or skill point per level. If you have Elven or Human Spirit, you may select the FCOs of elves or humans instead of those of half-elves.

-Neither Elf Nor Human: Use mythic power as a swift action to not be considered humanoid for 1/2 tier rounds. NICE!

There are 3 more feats on the SRD-page:

-Seen and Unseen: +1/2 tier to the bonus provided. If you expend mythic power, elves, humans and half-elves must roll twice to track you and use the worse result for mythic tier rounds, with multiple uses stacking.

-Shared Manipulation: Activate as a swift action. When using mythic power as a move action, increase the bonus provided to +3 and apply it to both Bluff and Intimidate checks made by allies for Cha-mod + tier rounds.

-Spirit of the Wild: +4 Perception in the chosen terrain, not only in surprise rounds. You can always act in surprise rounds in the terrain chosen and may expend mythic power at the beginning of a battle, surprise round or not, to gain blindsense 30 ft. for tier rounds. Nice sentry/stalker–feat.

Editing and formatting are very good, I noticed no rules-impeding glitches. Layout adheres to Legendary Games’ 2-column full color standard and the pdf has no bookmarks, but needs none at this length.

Jason Nelson and Jeff Lee’s Elf feats generally are nice and provide logical continuations of the imho rather subpar base feats they’re built on – which also brings me to the one issue here that is pretty pronounced: This time around, the base feats didn’t have much to offer and what was done with them is pretty nice. At the same time, I can’t really bring myself to recommend this one in the highest praises – though especially Neither Elf Nor Human is AWESOME. My final verdict will hence clock in at 4.5 stars, rounded down to 4 for the purpose of this platform – a solid selection of mythic upgrades.